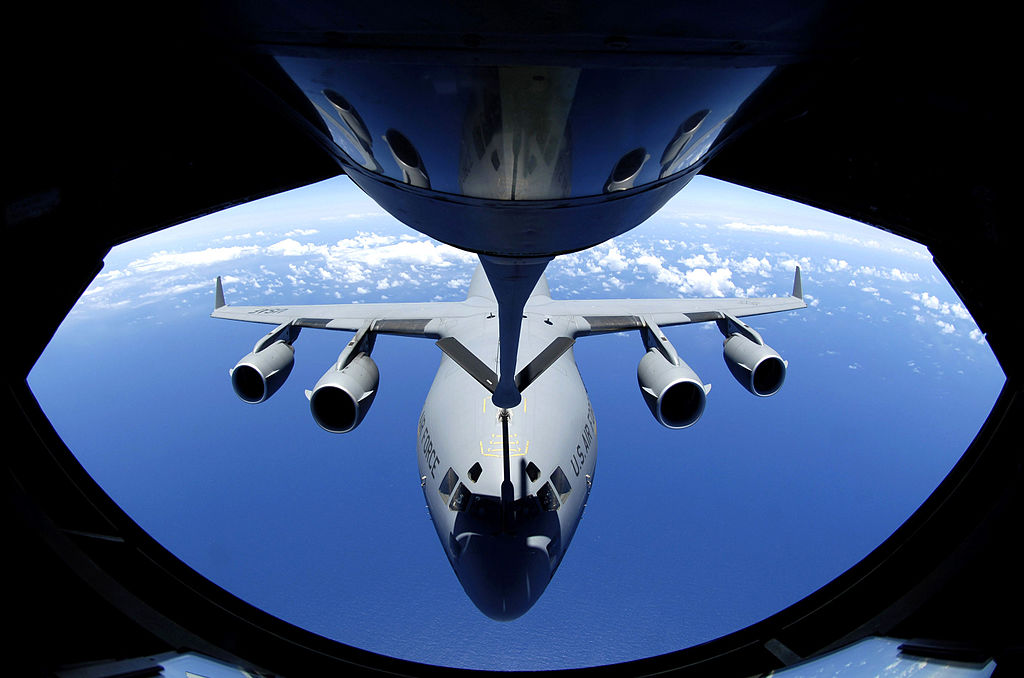 The following article on aerial refueling is an excerpt from Barrett Tillman’s book On Wave and Wing: The 100 Year Quest to Perfect the Aircraft Carrier. It is available to order now at Amazon and Barnes & Noble.

Jet aircraft brought unparalleled performance to carrier aircraft, but at a price. Aside from the difficulty of landing aboard ship at higher speeds than propeller planes, jets consumed large quantities of fuel. According to Rear Admiral James D. Ramage, an early commander of the East Coast heavy attack wing, “Tanker fuel is the most expensive there is because you pay for it twice. But when you need it, you really need it!”

Aerial refueling thus became an early priority with specialized equipment and techniques, and the Navy began examining the potential from 1948.

Jets could fly close formation and, with a tanker trailing a hose with a “basket” receptacle, the recipient could hook up without a piston aircraft’s whirling propeller intervening. From the mid-1950s an increasing number of carrier jets were equipped with aerial refueling probes, either fixed in place as with the A4D (later A-4) Skyhawk or retractable as with the F8U (later F-8) Crusader.

The earliest airborne tankers were modified A2J Savages, no longer needed for nuclear attack. However, the bigger, faster Douglas Skywarrior offered greater options and was modified or built in the KA-3B version, capable of lifting more than twenty thousand pounds (nearly three thousand gallons) of JP-5 jet fuel off a carrier deck.

Tankers not only extended the range of fighter and attack aircraft, but could save fuel-starved planes with battle damage or nearly empty tanks over a fouled deck.

An alternative to dedicated KA-3s and smaller KA-6 Intruder tankers was “buddy pack” aerial refueling. A-4 Skyhawks and A-7 Corsairs could fly with underwing tanks containing nine thousand pounds or more, enabling squadron mates to hook up and receive life-saving “plugs.” KA-3s left the fleet in 1987 and Intruders in 1997, leaving antisubmarine Lockheed S-3 Vikings to provide organic air wing tanking.

The perceived need of aerial refueling was such that the sixteen Vikings modified from ASW to multi-use electronic warfare roles retained the tanker capability. Some aircrew were appalled: “It showed a lack of clear thinking. They should have been as far from the carrier as possible, listening and recording.” The ES-3s were retired in 1999, and the last fleet Vikings departed a decade later.