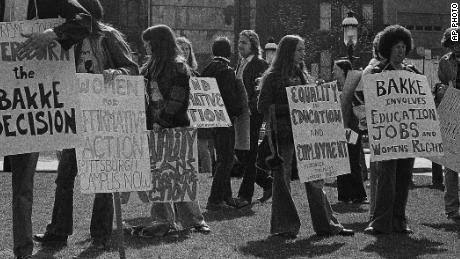 Affirmative action describes policies that support members of a disadvantaged group that has previously suffered discrimination (and may continue to) in such areas as education, employment, or housing.

Some observers feared that the legislation might give rise to preferential policies, like affirmative action. Proponents of the legislation denied that this could ever happen. Senator Hubert Humphrey famously promised a skeptical Senate colleague: “If the senator can find in Title VII [of the Civil Rights Act of 1964]… any language which provides that an employer will have to hire on the basis of percentage or quota related to color, race, religion, or national origin, I will start eating the pages one after another, because it is not there.”

Senators Joseph Clark and Clifford Case wrote a memo on the subject in which they insisted that the legislation contained no requirement that an employer “maintain a racial balance in his workforce. On the contrary, any deliberate attempt to maintain a racial balance, whatever such a balance may be, would involve a violation of [the legislation] because maintaining such a balance would require an employer to hire or refuse to hire on the basis of race.” Republican Senator Harrison Williams added that “to hire a Negro solely because he is a Negro is racial discrimination, just as much as a ‘white only’ employment policy…. Those who say that equality means favoritism do violence to common sense.”