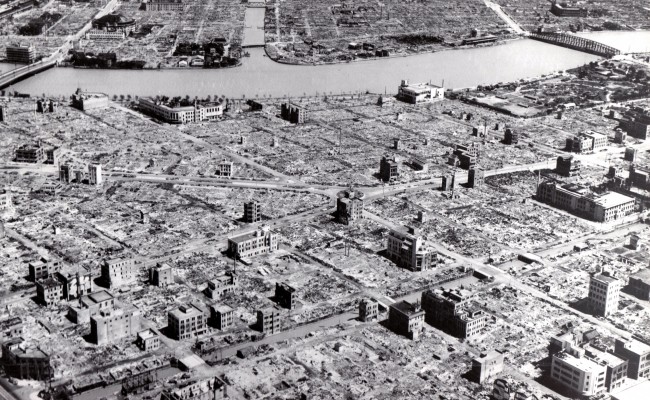 The following article on air raids on Japan in World War Two is an excerpt from Barrett Tillman’s book On Wave and Wing: The 100 Year Quest to Perfect the Aircraft Carrier. It is available to order now at Amazon and Barnes & Noble.

Lieutenant Commander Donald A. Pattie, a veteran of the North African operation, commanded Torpedo Squadron Twenty-Three in USS Langley (CVL-27). He led his Avengers over Tokyo on February 17, en route to the Tachikawa engine factory. In his memoir he recalled:

As we flew over the city. . .the imperial palace was easily distinguished, being a huge cream-colored structure. . . . In our approach we had an escort of fighters abeam and slightly above on each side. Glancing at the fighters on my left, I suddenly saw a Zero swoop down on the tail of our air group commander (J. J. Southerland). Before I could grab the radio and warn him, the Japanese pilot rolled over on his back and shot the commander down while inverted. It was not a show of flamboyance but a highly professional maneuver, executed with superb airmanship. Anyone suggesting the Japanese were poor pilots need only have seen it.

The sky was black with anti-aircraft bursts, and everywhere I looked, dogfights were taking place and planes going down. To grasp the intensity, one must realize that some 500 airplanes plus all the AA batteries within firing range were concentrated in one huge melee over the city.

Scanning the suburbs, I located our target and signaled my flight to space out. From that point on we were oblivious to all outside distractions. There were a number of factory buildings in the compound but I chose the main assembly building. Pushing over in the dive, we bore down with vengeance. To insure an effective attack, I held my release till the last moment, pulling out at the treetops. Looking back, I watched with satisfaction as all four bombs exploded inside the building. The others scored hits within the compound so I was satisfied the squadron had done a good job.

SIGNIFICANCE OF THE AIR RAIDS ON JAPAN

The second day, February 17, was cut short with worsening weather. Nonetheless, fighter pilots claimed almost one hundred more shootdowns and, more importantly, they kept every Japanese snooper away from the task force.

Immediately after the Tokyo strikes, attention diverted 750 miles southward to the Bonin Islands and the “burned out porkchop” called Iwo Jima. A dozen escort carriers supported the Marine assault troops which went ashore on February 19. The joint chiefs wanted Iwo because it put Army fighters in range of Tokyo, supporting B-29s operating from the Marianas.

Shipboard gunners opened massive antiaircraft fire against one suicide bomber after another. But in merely three minutes, Saratoga absorbed four of six attacking Kamikazes and at least three bombs. Badly wounded, she pulled off, barely forty miles from Iwo.

The Japanese were not finished. Funneling more planes down from the homeland, they bombed the burning carrier again, raising the death toll to 123. She survived, but her war ended that February evening.

Nor was that all. The “jeep” Bismarck Sea (CVE-95) was hit by two Kamikazes, sinking with nearly one-quarter of her crew. She was the last Allied carrier ever sunk.

Badly in need of night-fighter protection, the Iwo invasion fleet received Enterprise. She provided unprecedented coverage, flying nonstop for a week: 174 hours without respite. Nothing like it had ever been done, and years would pass before it was duplicated.

This article on air raids on Japan is an excerpt from Barrett Tillman’s book On Wave and Wing: The 100 Year Quest to Perfect the Aircraft Carrier. It is available to order now at Amazon and Barnes & Noble.