Mountain Men in the American West 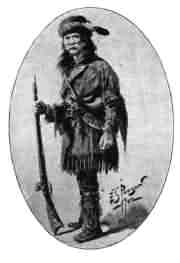 The lives of mountain men in the American West were ones of scarcity, poverty, and bare sustenance. Living in the wild, he was in constant danger from starvation, dehydration, freezing cold, burning heat, wild animals and Indians.

The fashion for wearing fur hats in the early nineteenth century meant that there was a great demand for animal fur. Men such as Jim Bridger were employed by Fur Trading companies to trap beavers and other animals for their fur. 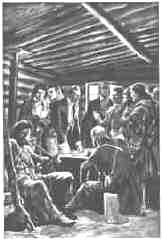 The only contact they had with the outside world was at a number of rendezvous and trading posts.

Some mountain men were accepted by the Indians and lived with them,a few married Indian women.

By 1840, fur hats were no longer fashionable and many mountain men became guides for those making the journey across the Plains to the west.

The mountain men were pioneers in charting the unknown territory west of the frontier. They found passes across the mountains and were familiar with the perils that could be found along the trails. After the decline in the fur trade, many mountain men became guides for those making the journey across the Plains to California or joined the army as scouts and guides. By the mid 1840s most of the routes to the west were well travelled and the guides’ main role was to help travellers to survive the harsh conditions and handle encounters with the Indians. 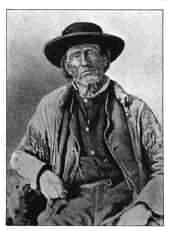 Jim Bridger (left) is probably the most famous mountain man of the period. He worked as a mountain man – trapping beaver, trading fur and dealing with Indians. He found passes through the mountains and knew the land well. He is credited with discovering the Great Salt Lake in 1824.

He spoke many languages including English, Spanish, French and a number of Indian languages.

When the trade in fur fell into decline, Jim Bridger built Fort Bridger on the Oregon trail. The fort contained a shop and a blacksmiths forge and was a useful facility for travellers to restock and repair their wagons.