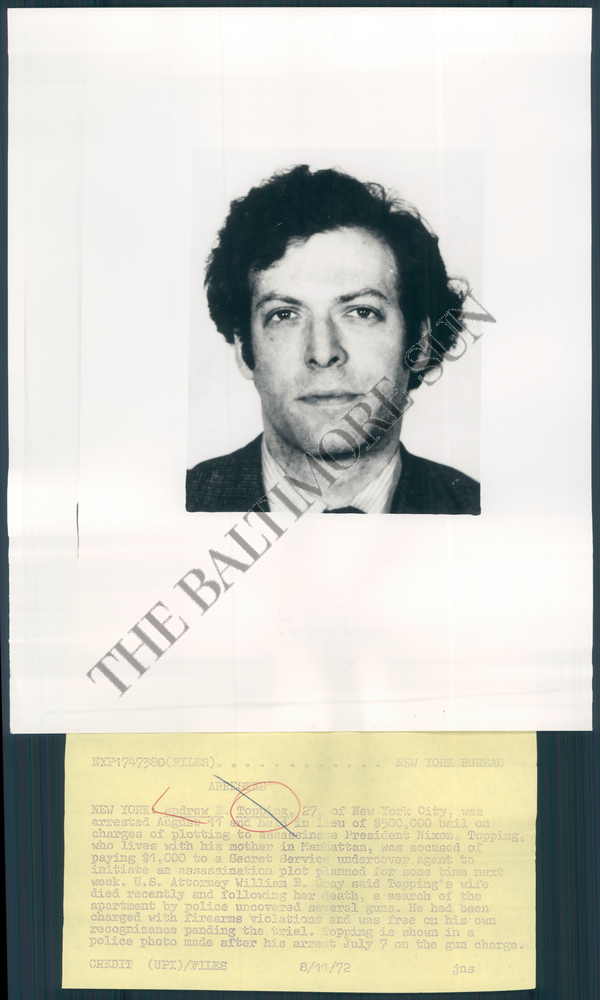 The following article on Andrew Topping is an excerpt from Mel Ayton’s Hunting the President: Threats, Plots, and Assassination Attempts—From FDR to Obama. It is available for order now from Amazon and Barnes & Noble.

In the fall of 1972 the Secret Service investigated an “assassin-for-hire” case in New York City. Andrew B. Topping was a twenty-seven-year-old “well-off” investment banker and right-wing radical whose wife had recently committed suicide. When police came to his apartment to investigate the suicide, they noticed Topping had “several guns,” including a .45 Webley, the same kind Topping’s wife used to kill herself. Topping was arrested and charged with firearms violations but released on his own recognizance pending his trial.

A week before his arrest on the guns charges, Topping, who blamed “pro rightist forces beyond his control” for his wife’s death, had made a request for an appointment to see President Nixon, which prompted Secret Service agents to interview him and carry out a background check. A short while later, one of Topping’s acquaintances arrived at Secret Service offices in New York and told agents that Topping had asked him for assistance in finding an assassin who would kill the president. The Secret Service arranged for one of their undercover agents, Stewart J. Henry, to pose as an assassin for hire.

On August 10, Agent Henry and the unnamed acquaintance met with Topping at the Central Park Boat Basin in New York City. After negotiations, Topping handed over $1,000 and made it clear the money was “to kill Nixon.” The “assassination” was planned for the following week. Topping was immediately arrested and taken to a local police station. He was charged with “threatening and attempting to kill the president of the United States.” During his court appearance he was ordered to undergo “mental tests.”49 Topping was sent to prison for his crime and returned to New York City on his release. He died in 2006.

This article on Andrew Topping is from Mel Ayton’s Hunting the President: Threats, Plots, and Assassination Attempts—From FDR to Obama.. Please use this data for any reference citations. To order this book, please visit its online sales page at Amazon or Barnes & Noble.