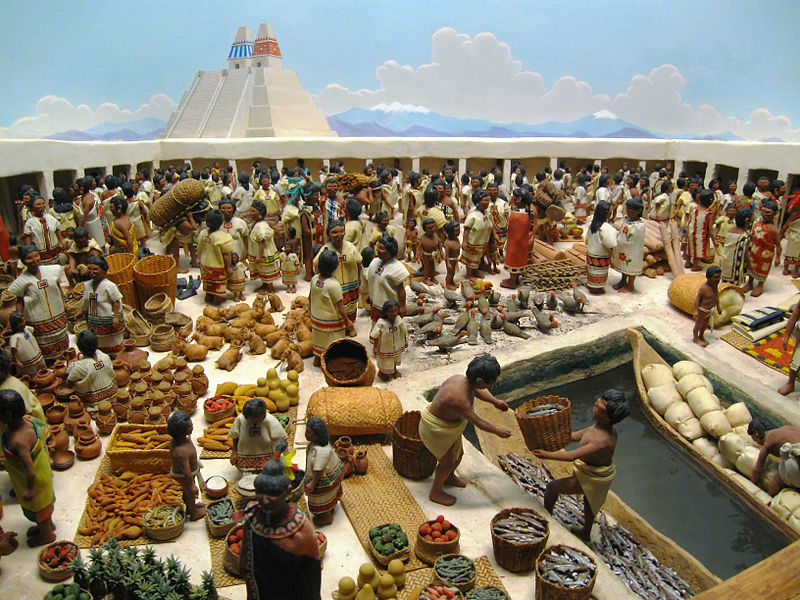 The Aztec economy was based on three things: agricultural goods, tribute, and trade. Aztec trade was crucially important to the empire; there could be no empire without it as many goods used by the Aztecs were not produced locally. Prized white cotton could not grow at the altitude of the Valley of Mexico and had to be imported from conquered semi-tropical regions further south, as were cacao beans, from which chocolate is made.

Two types of trading were important to the Aztecs: the local, regional markets where the goods that sustain daily life were traded and long-distance luxury trades. Each were vital to the empire, but served different purposes in the larger scheme of Aztec trade.

Every Aztec city and village had its own market located near the city center. Tlatelolco, sister city to Tenochtitlan, had the grandest market, drawing 60,000 people to it daily. As with most regional markets, all kinds of utilitarian goods were sold, such as cloth, garden produce, food animals, obsidian knives and tools, medicines, wood, leather, furs and animal skins, precious metals, gems and pottery. If an Aztec housewife needed some tomatoes, bone needles and a headache remedy, she’d go to the market for them. While there, she could buy something to eat and drink if she had a cacao bean or two to trade. Many Aztec people went to the market not only to shop, but to socialize, another important aspect of the teeming regional markets. There Aztecs from every walk of life could meet and swap news and gossip.

The regional markets were overseen by government trade officials who made sure the goods and the prices asked for them were fair. Four levels of regional markets existed: the grand, daily Tlatelolco market, the markets at Xochimilco and Texcoco, the every-five-day markets at many other Aztec cities and the small village markets. Officials collected tribute and taxes for the emperor from each of these interlocking markets. Some of the regional markets also contained specialized goods, fine ceramics for example, or turkeys for food or feathers from tropical birds

Pochteca were professional merchants, traveling long distances to obtain the luxury goods desired by the nobility: feathers from tropical birds, rare gems or jewelry and pottery created by other Mesoamerican cultures. The pochteca obtained anything rare and special, as well as the white cotton and cacao beans, earning them a special place in the Aztec society. They had their own capulli, laws and section of the city, even their own god, who watched over traders.

They often had dual or even triple roles in the empire, besides being simple traders. They often communicated crucial information from one area of the empire to another. And some served as spies for the emperor, often going disguised as something other than trader. This last group, the naualoztomeca, traded in rare, easily carried goods such as gems, rare feathers or secrets. Some pochteca were the importers, others dealt in wholesale goods and others still were retailers.