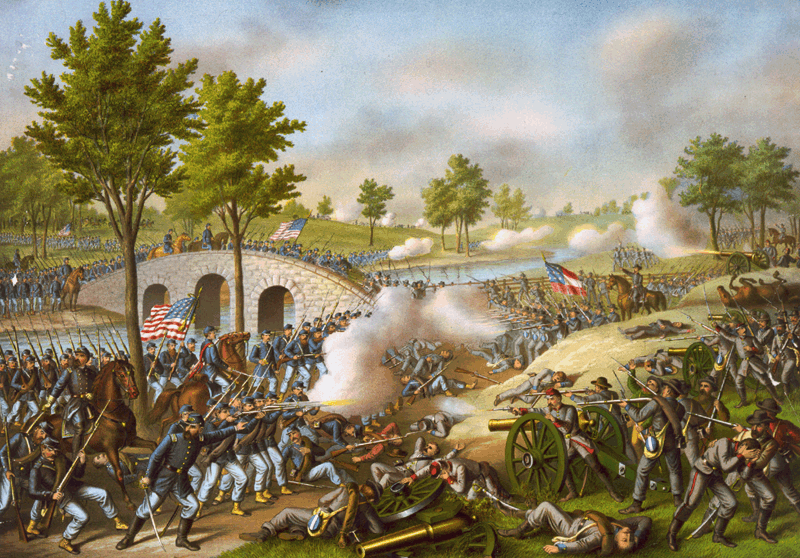 The Background of Battle of Antietam

Battle of Antietam-Having liberated most of the Old Dominion, Lee took his troopers on a campaign into Maryland, with his eyes on Pennsylvania, hoping to draw out another Union army and defeat it. This was an election year, and if Lee could bring Confederate troops to Maryland and Pennsylvania, perhaps Northern voters would return a congressional majority that would recognize Southern freedom.

Lee issued a proclamation as his army crossed into Maryland—a state where Lincoln had suspended habeas corpus and imposed martial law —emphasizing that the South stood for the principle of freedom, free association, and tolerance. In contrast to Pope’s threats against Southern civilians, Lee’s proclamation said: “No constraint upon your free will is intended: no intimidation will be allowed within the limits of this army, at least. Marylanders shall once more enjoy their ancient freedom of thought and speech. We know of no enemies among you, and will protect all, of every opinion. It is for you to decide your destiny freely and without constraint. This army will respect your choice, whatever it may be; and while the Southern people will rejoice to welcome you to your natural position among them, they will only welcome you when you come of your own free will.”

Lee’s troops were vulnerable, traveling in Federal territory, and in one of the great turning points of the war, Union troops found three cigars wrapped in a sheet of paper. The paper was a duplicate of Lee’s Special Orders No. 191 belonging to one of General D. H. Hill’s staff officers. The orders were delivered to McClellan, who now knew not only Lee’s entire plan of maneuver, but recognized how dangerously divided were Lee’s forces. “Here is a paper,” exclaimed Little Mac, “with which if I cannot whip Bobby Lee I will be willing to go home.”

The Battle of Antietam:

Lee was surprised at McClellan’s sudden alacrity—as if he knew Lee’s route and dispositions, which of course he did. McClellan was bringing 75,000 men to the attack. Lee’s full strength was only 38,000 men, and he could bring that number to the field only if Jackson’s corps returned in time from recapturing Harpers Ferry. Lee dispatched 15,000 men to impede McClellan’s advance through a gap in Maryland’s Catoctin Mountains. He brought the rest of his army to the Maryland town of Sharpsburg on Antietam Creek, where he intended to meet McClellan’s thrust.

The battle was engaged on 17 September 1862. The odds against Lee narrowed with the clock. Each advancing hour brought more Confederates from the march to the battle line. In the morning, as Lee arranged his men at Sharpsburg, he brought barely a quarter as many troops as McClellan to the field. By afternoon, with the arrival of Jackson, he had shaved the odds to three to one against him. And at full strength, which he did not have until the battle was nearly over, he was still outnumbered by two to one.

The battle was desperate. In the first four hours of combat, 13,000 men in blue and grey fell as casualties in the bloodiest day of the war.

Twice, the Confederate line was almost overwhelmed: first at Bloody Lane, where the Confederates, mistakenly thinking they had been ordered to retreat, nearly allowed their forces to be divided; and then late in the day when Lee’s right flank, which he had continually stripped to support his left, began to give way under a fierce, sustained attack by Union General Ambrose Burnside. As the flank finally dissolved under Federal fire, Burnside had a clear field to destroy Lee’s army.

But then, bang on time, after a seventeen-mile forced march, came Confederate General A. P. Hill’s men from Harpers Ferry. Hill brought only 3,000 men to field—2,000 others had either fallen out or been left straggling behind—but with serendipitous precision, they arrived exactly when and where the Confederates needed him most, on Burnside’s flank. Despite the rigors of the march, Hill’s men tore into the Federals, scattering the Union assault. The day of battle was over.

That night, Lee ordered no retreat. His men made camp, rested, and held their ground—daring the Federals to attack them again the next day. McClellan declined the opportunity. So, with nightfall, Lee pulled the men out of their lines and led them back across the Potomac to the safety of Virginia, with A. P. Hill smacking a contingent of pursuing Federals into the north bank of the Potomac, providing, in the words of historian Shelby Foote, “a sort of upbeat coda, after the crash and thunder of what had gone on before.”

The Battle of Sharpsburg is often considered a Confederate defeat, because it ended Lee’s invasion and thwarted his plans. So it did, but Lee and the Army of Northern Virginia deserve credit for what was also a brilliant tactical victory in the battle itself. The Confederates had held their ground against overwhelming odds, and held it again without challenge the next day. And if Lee could not take his army farther north, J. E. B. Stuart took his cavalry as far north as Chambersburg, Pennsylvania. President Lincoln was certainly not well pleased. He relieved General McClellan from command.

The Battle of Antietam—an 1862 clash between Robert E. lee’s Army of Northern Virginian and George McClellan’s Army of the Potomac—was the deadliest one-day battle in American history, with a total of 22,717 dead, wounded or missing. It came after Lee thwarted McClellan’s plans to lay siege to the Confederate capitol of Richmond and tried to seize the momentum by crossing north into Maryland.