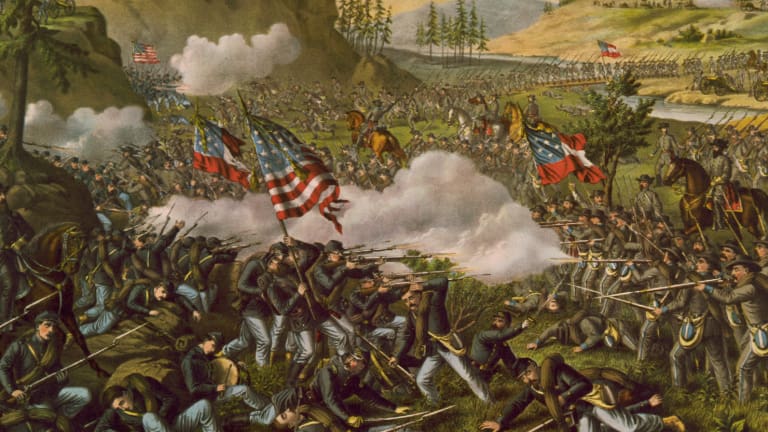 The Background- Battle of Chickamauga:

In Battle of Chickamauga , Confederate General Braxton Bragg retreated from Knoxville and Chattanooga, Tennessee, without a fight, with the supposed intent of setting up a masterful counterattack. He was pursued by hard-drinking (he was a Catholic convert), hard-swearing (his brother converted too and became a bishop), Yankee General William S. Rosecrans (“Old Rosey”—a West Pointer who had graduated fifth in his class).

The Battle of Chickamauga:

The armies collided in a deeply forested area near Chickamauga Creek. Visibility and room to maneuver were minimal, and the fighting was fierce with virtually every unit committed to combat. After a bloody but inconclusive opening round, Rosecrans pulled his men back under cover of nightfall, tightened the Union lines, built up log breastworks, and took up defensive positions.

Bragg, meanwhile, planned to flank the Federal left, which, unfortunately for him, was exactly the point that Rosecrans decided to reinforce. Bragg, however, now had another hammer to bludgeon the Federals: James Longstreet had arrived, detached from Lee’s command. Longstreet’s journey from Virginia had been detoured and delayed because of the Federal capture of the railroad at Knoxville. He finally found the battlefield by riding through the dark and asking directions from Federal troops— neither side recognizing the other in the black night.

At daybreak, the attack on the Federal left was pushed hard but went nowhere. The morning’s fighting was another bloody stalemate, until the Federals mistakenly left a gap in the center-right of their line. Confederate General John Bell Hood—riding to battle with one arm in a sling, and suffering a wound that would cost him a leg—led a charge against the Federal right flank. As the Federal right dissolved, Longstreet shifted his own men to the right and charged through the gap, shattering the Union line and driving Rosecrans and the Federal army into flight.

Union Major General George H. Thomas saved the day for the Federals, becoming “The Rock of Chickamauga.” He regrouped the Federals on the high ground at Snodgrass Hill, from which the Confederates couldn’t dislodge them until dusk. Thomas gave ground so stubbornly that the Confederates, exhausted, finally stopped pressing him. Thomas then withdrew his men in good order to Chattanooga.

Battle of Chickamauga was Longstreet’s return to form after Gettysburg. His aggressive performance earned him the nickname, “Old Bull of the Woods.” At Chickamauga the Confederates for once outnumbered the Federals, 65,000 to 62,000 men. They also took the worse casualties: more than 18,000 to more than 16,000. Though a Confederate victory, it was a victory that, because of poor generalship by Braxton Bragg, achieved little, except to reassure the Southern people that all was not lost in Tennessee.

The Battle of Chickamauga marked the end of Union Maj. Gen. William Rosencran’s offensive into southwestern Tennessee and northwestern Georgia and the most significant Union defeat in the Western Theatre. More died here than in any other battle, save Gettysburg. After the battle Union forces retired to Chattanooga while Confederates besieged the city by occupying the surrounding heights.

The Strategic Situation in the East after Gettysburg

The Strategic Situation in the West after Vicksburg

The Battle of Chickamauga