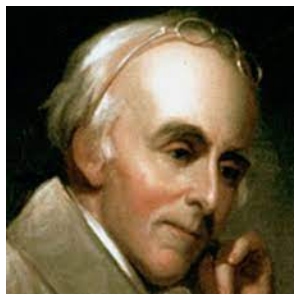 The following post is by guest contributor Jacob M. Appel. He is an author, playwright, and physician. Find out more about him here!

Although Benjamin Franklin is often considered the Renaissance man of the American Enlightenment, his fellow Philadelphian, Benjamin Rush (1746-1813), stands out as a formidable rival for this moniker. The son of a small-time farmer and shopkeeper, Rush rose to become one of the leading intellectual figures of the colonial rebellion against Great Britain and among the most prominent statesman of the nascent republic. Ubiquitous as Zelig or Forrest Gump, he appeared in numerous dramatic episodes of the American Revolution—from the signing of the Declaration of Independence to the Conway Cabal that attempted to depose George Washington from his leadership of the Continental armies in 1778. At the same time, Rush gained renown as a physician—arguably, the first American doctor of international repute—advocating for some reforms and resisting others in ways that would shape medicine for generations.

Trained at both the College of New Jersey (present-day Princeton) and the University of Edinburgh, Rush settled in Philadelphia in 1769 and launched a lucrative medical practice that would provide the financial underpinnings for his career as a reformer. His first significant foray into public advocacy took the shape of an anonymous anti-slavery pamphlet, An Address to the Inhabitants of the British Settlements in America, Upon Slave-Keeping, in which he argued that slavery was a moral evil that debased both owner and slave. This marked the beginning of an impassioned yet fraught relationship with the institution of slavery, as Rush came from a slaveholding family and continued to own one slave, a man named William Grubber, from 1776 to 1794—even while a member of the Pennsylvania Abolition Society. (In 1799, he would also publish an article titled “Observations Intended to Favour a Supposition That the Black Color (As It Is Called) of the Negroes Is Derived from the Leprosy,” which argued that “negroes” suffered from a biological condition that could be cured.) The response to Rush’s anti-slavery pamphlet proved fierce, and once the author’s identity became known, his medical practice lost nearly half of its business.

The backlash against Rush’s anti-slavery writings led him to temper—at least temporarily—his public pronouncements on another subject about which he cared deeply, namely the relationship between the American colonies and Great Britain. That led him to encourage an acquaintance, Thomas Paine, whose own essay condemning slavery he admired, to champion the cause of complete independence from the mother country. Rush reviewed Paine’s incendiary pamphlet that advocated for the breach, arranged for Benjamin Franklin to offer editorial guidance, and helped to facilitate the document’s printing. He even proposed the title, Common Sense, which Paine adopted over his preference for Plain Truth.

Shortly thereafter, Rush was elected to the Continental Congress, where he served on its Medical Committee. However, the major turning point in his career occurred when he accepted a field position as surgeon general of the middle department—assuming, for all practical purposes, the charge of the health of General Washington’s army. Whereas medicine had previously been a private calling, now it proved a public crusade. Among Rush’s contributions to the war effort was the adoption of closely-cropped hair to prevent lice, still a hallmark of American soldiers today. Unfortunately, he struggled to get along with his superiors, particularly Surgeon General William Shippen, Jr., and was ultimately forced from his post. Among his final acts in office was writing a handful of letters critical of Washington’s leadership, including one to friend John Adams, which were perceived as an effort to undermine Washington in favor of General Horatio Gates. Needless to say, this effort proved ineffective—and Rush spent his later years praising Washington in an effort to rewrite this narrative.

After the American Revolution, Rush shifted his primary professional efforts to reforming medicine. Among his most significant contributions occurred during Philadelphia’s yellow fever epidemic of 1793. Unlike other physicians, who fled the city, Rush remained to provide care. He famously declared, “I have resolved to stick to my principles, my practice, and my patients to the last extremity.” Rush himself contracted the disease but survived. While the rudimentary treatments that he offered, purgatives and blood-letting, were at best ineffective, and most likely harmful to his patients, the very fact that he remained within the city limits set an expectation that would radically alter epidemic care.

Rush’s second major contribution to American medicine was in the field of mental health. Influenced by the work of Philippe Pinel in France, he was among the first American physicians to view psychiatric illnesses as treatable forms of disease; he later applied the same approach to the treatment of alcoholism. In an era where psychiatric patients were often held in chains, he favored minimizing force in favor of rational therapeutics. His treatise, Observations and Inquiries upon the Diseases of the Mind (1812), was the only widely available guide to mental illness published in the United States until 1883. That is not to say that Rush’s ideas all led to progress: He was among the leading opponents of empiricism, the belief that disease should be treated based upon evidence rather than conceptual and theoretical understandings of pathology. He also advocated sensory deprivation to improve brain circulation in the mentally ill. His apprentices, who number at least 135, included many of the early Republic’s most sought-after clinicians, but also Samuel Cartwright, a notorious perpetrator of racist pseudoscience.

One of Rush’s less than heralded contributions, but arguably among the most important, was his role in teaching medicine and first aid to Captain Meriwether Lewis, the leader of Thomas Jefferson’s Corps of Discovery, before the launch of the Lewis and Clark Expedition. When Rush died of typhus in 1813, his contemporaries ranked him alongside Jefferson and Adams among the nation’s most revered elder statesmen.