Black Americans had to ‘fight’ for their right to equality. In the 1950s a Baptist preacher named Martin Luther King became the leader of the Civil Rights Movement. He believed that peaceful protest was the way forward.

Some of the protests of the Civil Rights movement are detailed below:

1954
Oliver Brown v. Board of Education of Topeka, Kansas

In the 1950s, school segregation was widely accepted throughout the United States and was a requirement of law in most southern states.

In 1952, the Supreme Court heard a number of school-segregation cases, including Brown v. Board of Education of Topeka, Kansas. In 1954 the court decreed that segregation was unconstitutional. 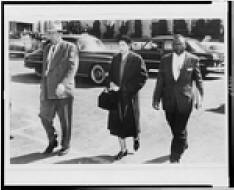 Rosa Parks, a 43 year old black seamstress, was arrested in Montgomery, Alabama, on 5th December 1955 for refusing to give up her bus seat to a white man. The Montgomery Bus rules stated that white people boarding its buses should fill the bus by occupying seats from the front backwards. Coloured people should fill the bus by occupying the seats from the back forwards. If the bus became full additional coloured people boarding the bus would stand but if additional white people boarded the bus coloured people would be expected to give up their seats and stand. Civil Rights leaders including  Dr. Martin Luther King, organized the Montgomery Bus Boycott specifically in protest against Parks’ arrest but also as a protest against the segregation practices used by the bus company.

Parks was found guilty by a court on 5th December and fined but she appealed the court’s decision. Meanwhile the Montgomery Bus boycott was being put into place. Negroes and others who supported equality agreed not to use the buses, a move which would deprive the bus company of 65% of its income.

Although Martin Luther King was fined $500 for interfering with the running of businesses, the protest was successful and on 4th June 1956 the Supreme Court decided, based on the outcome of recent school segregation cases, that bus segregation violated the United States constitution. 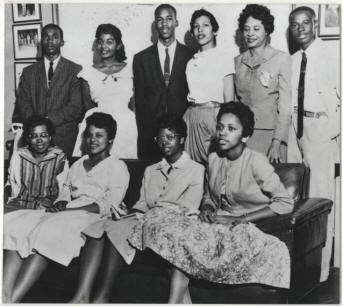 On 4th September the nine students duly arrived at the school but found their way barred by anti-desegregation protestors. Arkansas governor, Orval Faubus, had ordered the Arkansas National Guard to reinforce the protest line. The National Guard remained stationed outside the school until 20th September when the courts ordered Faubus to remove them.

On September 23rd the nine students returned to the school and although they were shouted at and jeered by the angry crowd of white protestors they were able to enter the school. However, fearing for their safety the police sent them home before the end of the day.

President Eisenhower intervened at this point and ordered the 101st Airborne Division of the US Army to Little Rock where they were to ensure that the nine students were able to enter and leave the school in safety. He also federalised the National Guard so that they could no longer be deployed by Faubus. The 101st Airborne remained in Little Rock until November 1957.

In Spring 1958 Minnijean Brown was suspended for her acts of retaliation against white taunts and abuse. The other eight remained at school despite the abuse and taunts and all eight graduated. 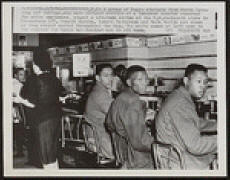 After having been refused service at the lunch counter of a Woolworth’s in Greensboro, North Carolina, Joseph McNeill, a Negro college student, returned the next day with three classmates to sit at the counter until they were served.

They were not served. The four students returned to the lunch counter each day.

When an article in the New York Times drew attention to the students’ protest, they were joined by more students, both black and white, and students across the nation were inspired to launch similar protests. 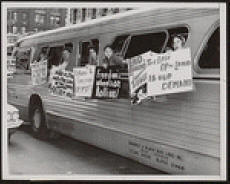 In 1961, bus loads of people waged a cross-country campaign to try to end the segregation of bus terminals.

Groups of black and white students travelled on buses through the southern states choosing to sit where they pleased.

At many stops along the way the group encountered violence but they refused to give up and continued riding the buses. 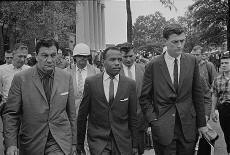 President Kennedy ordered Federal Marshals to escort James Meredith, the first black student to enrol at the University of Mississippi, to campus. A riot broke out and before the National Guard could arrive to reinforce the marshals, two students were killed. 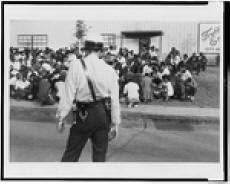 Birmingham, Alabama was one of the most segregated cities in the 1960s. Black men and women held sit-ins at lunch counters where they were refused service, and “kneel-ins” on church steps where they were denied entrance.

Hundreds of demonstrators were fined and imprisoned. In 1963, Dr. King, the Reverend Abernathy and the Reverend Shuttlesworth led a protest march in Birmingham where they were arrested by policemen with dogs. The three ministers were taken to Southside Jail.