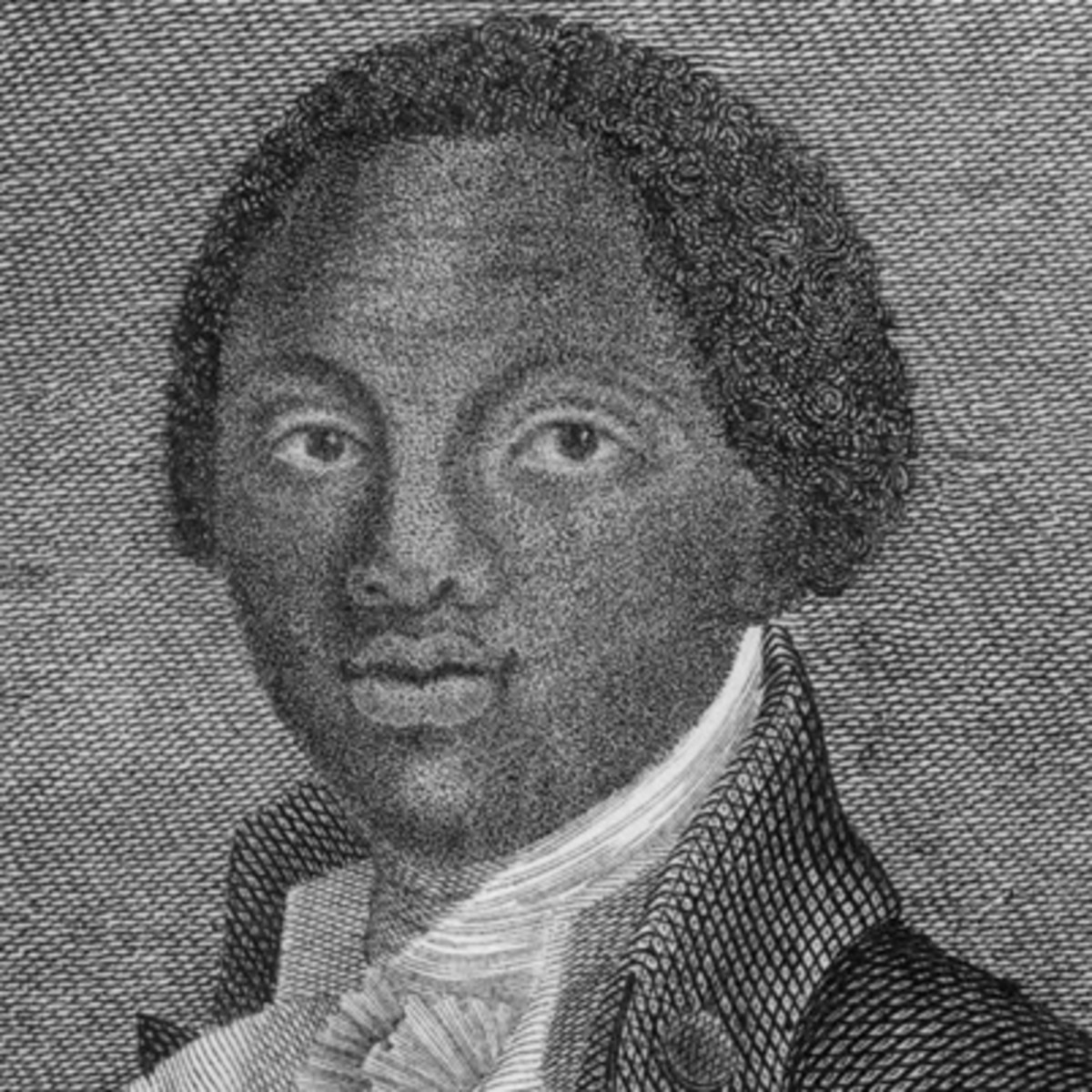 The autobiography of Olaudah Equiano provides us with a detailed insight into the experience of a captured slave.

The following account was adapted from Equiano’s The Interesting Narrative of Olaudah Equiano or Gustavus Vassa the African by H. Wheeler.

Olaudah Equiano was born in 1745 in the African country that is now Nigeria. The adults worked in the fields during the day leaving the children to fend for themselves in the village. Older children were often given the task of acting as lookouts and if they saw any traders approaching the village they would let out a loud cry. ‘AIEEEEEEEYAH!’

Olaudah and his sister were in the hut when they heard the cry. Looking out of the door, Olaudah saw the traders hurrying into the village and knew that there was no time for them to reach the safety of the trees. He and his sister crouched in the corner of the hut and held their breath. Their hearts were pounding and their ears were strained for the sound of approaching footsteps that surely enough came their way. Both Olaudah and his sister were roughly seized and their mouths were stopped with dirty cloths to stop them from crying out. Sacks were placed over their heads and they were carried away from the village. After a while they were put down on the ground and their hands were tied behind their backs. The sacks were replaced over their heads and again they were carried until nightfall.?

Although they were offered food that first night the children were unable to eat. They felt too sick from fear, the dirty rags that had been in their mouths and the confinement of the sacking over their heads.

After a few days they reached a larger African settlement and here Olaudah and his sister were separated and sold to different families. During the seven months that Olaudah spent in slavery in Africa he was mostly treated kindly, in some cases as part of the family, and was given fairly simple household tasks to do. In Africa slaves were respected and their status as part of the family was valued. Olaudah was soon to discover that slavery in America was very different.

Eventually he was sold to another trader. Olaudah was marched many miles and saw the landscape change. He was soon shocked to see that the land had changed to the colour of the sky and appeared to be moving up and down. Olaudah was very frightened and had to be dragged nearer to the sea. He then noticed a very big ‘house’ on the moving land. The people around the big ‘house’ looked very strange. They had long hair, white skin and spoke a strange language. Olaudah thought that they were devils.

Because of his youth Olaudah was not chained like the men and women but he was dragged aboard the ship. There he saw a large copper pot above a furnace and fearing that he was going to be boiled alive and eaten by the white men, he fainted on the deck. When he came round black men were standing over him and he was reassured that he was not going to be eaten. As Olaudah looked back towards the shore he saw that he was moving away from the shoreline and realised that he would never see his homeland again.

Suddenly all the slaves were forced below deck. The hold was overcrowded, each man only had about eighteen inches space in which to sit. Everywhere people were sweating, vomiting, urinating and defecating from fear and the movement of the ship. The smell was overpowering and many fainted or died from the stale air. There were tubs at one end of the hold, which served as toilets but they were rarely emptied and often small children would fall in and drown. Olaudah was so ill from the smell and the conditions in the hold that he was allowed to sit on deck during the day to breathe fresh air. All he wanted to do though was to die. He was unable to jump overboard because of the nets on the sides of the boat so he refused to eat. He was beaten for not eating and not wishing to be punished again he began to eat some food.

Eventually the ship reached the West Indies and although many slaves had died on the crossing many remained alive. Merchants and plantation owners came aboard the ship to look at the slaves and Olaudah was made to jump up and down and stick his tongue out by one of the men. Slaves were poked and prodded all over their bodies by potential owners who wanted to be sure that they got the healthiest slaves.

The next day the slaves were taken ashore and Olaudah was amazed to see that the houses were made out of bricks. He was even more amazed to see people riding horses and this served to enhance his belief that the white peoples were devils.?

All the slaves were put into a pen like a sheep pen. Suddenly there was a beat of a drum and merchants and plantation owners rushed up to the pen to choose the slave that they wanted. Because he was so sickly Olaudah was one of the last to be chosen. He was taken to a big house and was deposited in the kitchen. Here the sight of the Negro Cook who had a huge wire frame fitted around her mouth shocked him. He was later to learn that the mask was a punishment for too much talking.

Olaudah was not strong enough to work in the fields and so was given the task of sitting with the grandfather of the house who was dying. All day long he had to sit on a hard wooden chair ready in case the old man wanted anything. He also had to help feed him.

His day was very boring, sat in the deathly quiet room with only the ticking of the clock for company tick-tock-tick-tock-tick- tock punctuated by the groaning and moaning of the old man as he fought to draw breath. Meal times broke the monotony but turned Olaudah’s stomach as he spoon-fed soup to the old man who dribbled and coughed and spluttered all over him.

The Merchant and Freedom

When the old man died Olaudah was sold to a sea Captain who allowed the sailors on board the ship to teach him to read and to write. Although he was very well treated by the merchant, Olaudah longed to be free and to return to his homeland. He began buying fruit before sailing and selling it on to the sailors for a small profit. Eventually he saved enough to buy his freedom.

As a free man, he settled in England. He met Granville Sharp and the other members of the Society for the Abolition of Slavery. He made public speeches, giving a first-hand account of the treatment of slaves during capture, sea passage and slavery. Slavery was abolished in Britain in 1807 and throughout the Empire in 1833. Olaudah eventually travelled back to Nigeria to find his homeland, but sadly there was no trace of his village or his family.