The transport of black Africans to the Americas by slave ship became known as the Middle Passage because it was the middle leg of the Triangular Trade route used by the European merchants.

The African slaves were viewed as cargo by the merchants and were packed into the ships with no regard to their basic human rights.

The famous diagram above shows how slaves were tightly packed into the slave ships. 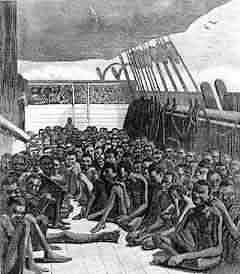 Other slaves were forced to spend the voyage sitting on deck, as on the ship ‘Wildfire’, pictured above.

Many slaves became seasick or developed diarrhoea. Unable to move because they were chained into their positions, the slave’s deck became a stinking mass of human waste. Slaves who had developed sores where their chains had rubbed their skin, had festering wounds often with maggots eating away their flesh.

Conditions on the slave ships were so bad that many slaves decided they would prefer to die and tried to starve themselves by refusing to eat or by jumping overboard.

However, slaves that would not eat were whipped or force fed and the traders and ship owners began fixing nets to the sides of the boat so that the slaves could not jump overboard.

Slaves had no choice but to endure the horrific conditions.