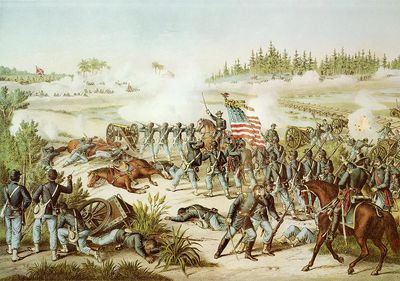 The Chantilly Battle concluded the Civil War’s Northern Virginia Campaign. Though the Union had more casualties (16,054) compared to that of Confederacy (9,197), the battle was still inconclusive.

Defeated at the Second Battle of Manassas, Major General John Pope’s Army of Virginia retreated east and re-concentrated around Centreville, VA. Weary from the fighting, General Robert E. Lee did not immediately pursue the retreating Federals. This pause allowed Pope to be reinforced by troops arriving from Major General George B. McClellan’s failed Peninsula Campaign.

During the night, Pope learned that Major General J.E.B. Stuart’s Confederate cavalry had shelled the Jermantown crossroads. While this report was initially dismissed a subsequent one detailing a large mass of infantry on the turnpike elicited a response. Realizing the danger, Pope cancelled the attack on Lee and began shifting men to ensure that his line of retreat to Washington was protected.

Arriving south of the farm, Stevens also sent skirmishers forward driving back the Confederates. As Stevens’ division arrived on the scene, Jackson began deploying additional troops to the east. Forming his division to attack, Stevens’ was soon joined by Reno who brought up Colonel Edward Ferrero’s brigade. Ill, Reno assigned Ferrero’s men to cover the Union right but left tactical control of the fighting to Stevens, who sent an aide to seek additional men. As Stevens prepared to advance, what had been a steady rain increased to a heavy downpour damaging cartridges on both sides.
Pushing across open terrain and a cornfield, the Union troops found the going hard as the rain turned the ground into mud.

Aftermath of the Chantilly Battle

Having failed in his goal to cut off Pope’s army, Jackson began falling back from Ox Hill around 11:00 that night leaving the Union forces in control of the field.