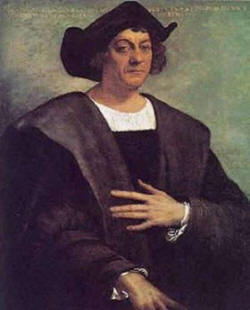 Columbus believed that it was possible to make the journey much more quickly by sailing west and planned a voyage to discover a westward route. In order to put his plan into action Columbus needed financial backing. His plan was rejected by the monarchs of Portugal, Italy, Britain and France before he secured the backing of Ferdinand and Isabella of Spain.

Columbus set off on his first voyage on 3rd August 1492 with three ships, the Santa Maria, the Pinta and the Nina. On 12th October Columbus sighted land and named the island San Salvador. He had discovered the Bahamas. Believing that he had reached the Indies Columbus called the native people Indians. He explored the island of Cuba and Haiti before returning to Spain

Columbus embarked on his second voyage on 24th September 1493. His mission was to discover new territories and colonize them. On November 3rd he saw a rugged island and named it Dominica (Sunday). Columbus spent the next six months exploring and colonizing the area before returning to Spain.

Columbus made two further voyages exploring more of the New World and hoping to find the elusive route to the Orient.

Although he was a an experienced and gifted sailor, his management skills were poor and on each return voyage he was faced with the discontent of the native peoples and those Europeans who had been left to colonize the area.

Columbus died in 1506 at the age of 55. He remained convinced that the lands he had discovered were in Asia.