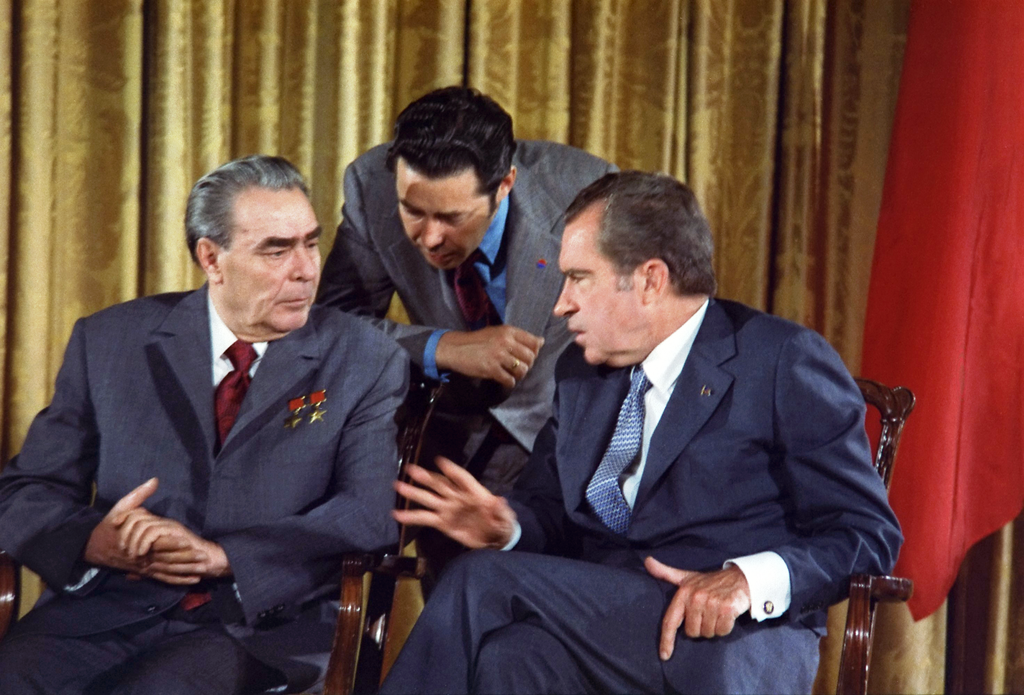 The following article on the Cold War Detente is an excerpt from Lee Edwards and Elizabeth Edwards Spalding’s book A Brief History of the Cold War It is available to order now at Amazon and Barnes & Noble.

By the time of the Nixon presidency, the nature of the Cold War had changed. Applying its interpretation of peaceful coexistence, an aggressive Soviet Union called for “wars of national liberation,” and supported many of them in the 1960s.

The communist world had grown substantially, spreading from Eastern Europe, China, North Korea, and North Vietnam to other parts of Asia (Cambodia and Afghanistan), Africa (Angola and Mozambique), and Latin America (Nicaragua). Many political and intellectual elites in industrialized countries openly voiced their preference for the policies of Moscow and Beijing rather than Washington and London. The nonaligned world, led by India, often sided with the communist bloc in the United Nations and regional organizations, while presenting itself as neutral.

The American domestic scene had also substantially changed. After twenty years, the bipartisan consensus on the Cold War was coming apart. Anti-war demonstrations were increasing, and congressional hawks were turning into doves. Vietnam was a major, but not the only, cause of contention. So was the issue of nuclear parity.

The Soviet Union had made quick progress building its nuclear program, while the United States chose to permit parity through defense spending decisions and arms control treaties. Supporters of the parity policy argued that the decision was forced by limited means and a balancing of defense and domestic needs. Opponents countered that America should have fought the Vietnam War differently and made different decisions regarding national security and domestic priorities. They stressed that the United States should have pursued a policy of peace through strength rather than peace through negotiations from a position of parity.

THE FAILURE OF THE COLD WAR DETENTE

The Cold War Detente peaked in 1975, the year of the Helsinki Accords between the Soviet bloc and the West, and died in 1979, the year of the USSR’s invasion of Afghanistan. At Helsinki, the West accepted the Soviet-imposed border changes from the end of World War II and agreed to increase trade with the Soviet Union, whose economy was lagging badly behind those of Western nations. In exchange, the Soviets and their satellites agreed to respect human rights within their borders.

This did not seem to be a significant Soviet concession. The communist parties of the Soviet bloc were apparently in firm control—the brutal suppression of the 1968 Prague Spring was still fresh in people’s minds— and the West did not seem interested in allowing human rights to interfere with the Cold War Detente.

But human rights advocates within the Soviet Union and Eastern and Central Europe used the Helsinki accords to challenge the old communist order. They laid the foundation for the people’s revolution that brought about the collapse of communism a little more than a decade later.

Helsinki’s considerable impact inside the Soviet Union was unexpected. Anatoly Dobrynin, the Soviet ambassador to the United States from 1962 to 1986, wrote that Brezhnev thought it would not cause “any trouble” inside Soviet Russia, “but he was wrong.” While the condition of Soviet dissidents did not change overnight, they were “definitely encouraged by this historic document. . . . It gradually became a manifesto of the dissident . . . movement.” By the summer of 1976, a Public Group to Promote Observance of the Helsinki Accords was operating in Moscow with the blessing of Andrei Sakharov, the Russian nuclear physicist who became a renowned human rights advocate. Similar “Helsinki Groups,” including Václav Havel’s Charter 77 group in Czechoslovakia, were appearing all over Eastern and Central Europe.

No sign of cataclysmic change was visible in the early 1970s, but by the end of the decade, it was clear that the Cold War detente had failed as a substitute for the policy of containment. John Lewis Gaddis has identified several reasons for this failure. Nixon and Kissinger had attempted to link benefits like Western exports of food and technology to the peaceful advancement of Soviet interests in the Third World, but linkage had not produced the results promised. Had Soviet behavior actually changed? The Soviets accepted the 1973 Egyptian surprise attack on Israel, provided aid to communists in Portugal following a 1974 revolution, did nothing in 1975 to keep North Vietnam from overrunning South Vietnam, and used Cuban troops as proxies in 1974 to install a Marxist government in Angola. Furthermore, during the Ford and Carter administrations the Soviets supported Marxist regimes in Somalia and Ethiopia, exploited Marxist coups in South Yemen and Afghanistan, and in 1979 invaded Afghanistan. They armed and trained revolutionaries in at least twenty-five countries, including Angola, Mozambique, Nicaragua, Uruguay, and Mexico.

It did not occur to the apostles of detente, apparently, that the Soviets were more interested in furthering socialism in the Third World than in preserving stability. For the Soviets, detente did not mean an end to U.S.Soviet competition but only an agreement not to escalate the competition to dangerous levels. Proud of their realist theory, Nixon and Kissinger (and their immediate successors) chose not to see that the Soviets had not abandoned the ideological goal of global socialism.

The Cold War detente also papered over Communist China’s totalitarian behavior behind the Bamboo Curtain. During this period, millions of Chinese (and Tibetans) died at the hands of the ruling Communist Party and the PLA while the cult of Mao the “Great Helmsman” was enhanced both inside and outside China. Nixon and Kissinger insisted that China, like the Soviet Union, should not be judged by the usual humanitarian standards. Détente, they argued, was more important than what governments said and did to their own people, no matter how reprehensible their behavior. Détente advanced China’s international standing at the expense of the Republic of China and non-communist Chinese throughout Asia.

Caught up in its own rhetoric, the White House encouraged Congress and the public to expect too much from linkage. At their May 1972 summit, Nixon and Brezhnev signed a statement of “Basic Principles” governing U.S.-Soviet relations in which the two powers promised that they would avoid military confrontation and exercise restraint. The statement set an unrealistically high standard the Soviets had no intention of meeting, as their aggressive actions throughout the 1970s demonstrated. Yet Kissinger continued to postulate that the Soviet Union would find it in its interest to practice “self-containment.”

While depending heavily on linkage, the Nixon-FordKissinger triumvirate made the most substantial reductions in America’s national defense in the postwar period. Defense spending as a percentage of gross domestic product went from 8.2 percent in fiscal year 1970 to 5.2 percent in fiscal year 1977. The Soviets were spending several times as much of their GDP on their military arsenal. Kissinger was seemingly resigned to the growth of Soviet military strength. His goal was strategic parity (not superiority) between the Soviet Union and the United States as a path to global stability.

The second failure of the Cold War detente was arms control agreements with the Soviets. SALT I was meant to be the centerpiece of arms control. The treaty limited the Soviet military buildup without restricting future steps the United States might take to upgrade its strategic arms. One important disadvantage was that it froze Soviet missile strength at a much higher level than the U.S. arsenal—1330 Soviet ICBMs versus 1054 American ICBMs.

SALT I was soon rendered obsolete by the continuing arms race. Both sides took advantage of their right to modernize and increased the number of their strategic warheads. In an attempt to slow down the arms race, President Carter, after taking office in 1977, further cut the defense budget. The Soviets responded by continuing their buildup of nuclear and conventional weapons.

The Soviets increased concern among U.S. allies by deploying a new generation of mobile intermediate-range missiles (the SS-20) in Eastern Europe; the SS-20 had an initial maximum range of 3,100 miles, threatening all of Western Europe. When the Interim SALT I agreement expired in 1977, both sides were more heavily armed than before. But for the first time since 1945, the United States no longer had overall military superiority.

A third failure of Nixon-Kissinger-style detente was its focus on great power politics to the neglect of the rest of the world. American foreign policy was insensitive to local concerns such as the rise of anti-colonialism in Angola and Mozambique, focusing instead on how Moscow or Beijing might react to U.S. policy.

Both the Left and the Right charged that Nixon and Kissinger were more attracted to global stability than human rights. Liberals pointed to U.S. relations with authoritarian regimes in South Korea, the Philippines, Pakistan, Iran, Greece, Portugal, and Chile. Conservatives complained about the administration’s silence about communist suppression in the Soviet Union, Eastern and Central Europe, Cuba, and China. In 1973 a congressional coalition of anti-communist liberals and conservatives forced the State Department to submit annual reports on the state of human rights in more than one hundred countries.

Kissinger argued that given the hand he was dealt— the public’s weariness with the protracted nature of the Cold War and Congress’s hostility to the Vietnam War and similar acts of military “adventurism”—balance-of power detente was the best possible policy. But Kissinger was never able to build a widespread public consensus for his foreign policy. His efforts were weakened by the inability of the two presidents he served to help him. The beleaguered Nixon was too busy coping with Watergate, and the inarticulate Ford was incapable of explaining detente to a public wary of Washington rhetoric.

This article is part of our larger selection of posts about the Cold War. To learn more, click here for our comprehensive guide to the Cold War.

This article on the Cold War detente is an excerpt from Lee Edwards and Elizabeth Edwards Spalding’s book A Brief History of the Cold War. It is available to order now at Amazon and Barnes & Noble.