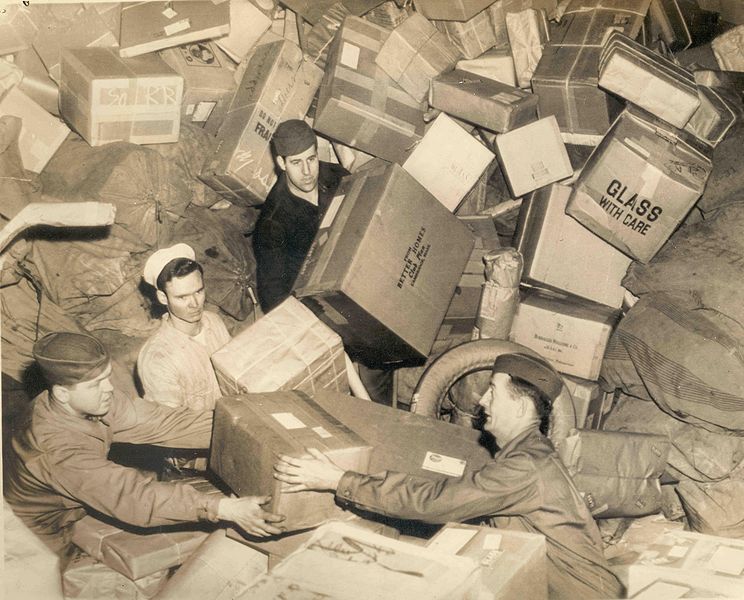 The following article on D-Day logistics is an excerpt from Barrett Tillman’ D-Day Encyclopedia. It is available for order now from Amazon and Barnes & Noble.

A saying in military circles holds, ‘‘Amateurs study tactics. Professionals study logistics.’’ In any military operation, logistical needs must be met before tactics can be applied, because logistics provide ‘‘the sinews of war.’’ The greatest of such feats manifested itself in the planning for D-Day logistics.

In a large sense, World War II turned upon the successful logistics of the European Theater of Operations. In turn, providing the ETO with the matériel necessary for prosecuting the war against Germany depended upon the Battle of the Atlantic, the five-year struggle against Germany’s U-boats. Each phase of the war was interdependent.

Upon America’s formal entry into the war in December 1941, its logistical support of Britain and Russia became more overt, because the prewar neutrality debate was obviated. Soviet premier Joseph Stalin pressed the Anglo-Americans for a Western front to alleviate intense German pressure on his badly battered armed forces, but neither the United States nor Great Britain was capable of launching such an offensive at the time. The Pearl Harbor attack caught American production far short of its own needs, let alone those of its Allies.

During 1942 events stabilized in the Middle East as Germany’s drive toward Suez was halted. Late that year Nazi forces suffered a catastrophic defeat at Stalingrad, and the Western Allies landed in French Morocco. A token effort at opening a European offensive occurred with the ill-fated Dieppe landing in August, when Canadian forces sustained heavy losses at little benefit. Even had a sufficient ground force been assembled in Britain to launch Overlord in 1942, there were far too few landing craft for the effort.

Subsequently, however, immense strides were made in supplying the increasing production of America’s ‘‘arsenal of democracy,’’ even when its products went to the Soviet Union. An overland route through Persia, the northern convoys to Murmansk, and the air bridge from Alaska all contributed to Soviet military logistics. Throughout the war, the United States provided some $11.3 billion of military aid to Russia; Britain sent supplies worth $1.3 billion.

Meanwhile, the buildup to D-Day was undertaken by Operation Bolero, a logistical effort of unprecedented magnitude. Sailing on now-secure sea routes, the U.S. Navy and merchant marine took 1,200,000 troops to Britain, where hundreds of camps and bases were established and supplied with everything from chewing gum to bombers. Britain’s existing infrastructure was inadequate to support the massive effort, so a thousand locomotives and twenty thousand freight cars were shipped from the United States, plus material for hundreds of miles of additional rail lines. Transatlantic shipments increased to the point that some 1,900,000 tons of supplies reached Britain in May 1944 alone, showing the scale of D-Day logistics.

In command of the U.S. Army’s Service of Supply was Lt. Gen. John C. H. Lee, an engineer officer of long experience. In the two years between 1942 and 1944, Eisenhower said that Lee turned the United Kingdom into ‘‘one gigantic air base, workshop, storage depot, and mobilization camp.’’

The manpower required to meet the needs for D-Day logistics was enormous. Less than one-fourth of the Allied troops in France were in combat units, and only about 20 percent served as infantrymen. A four- or five-to-one ‘‘tail to tooth’’ ratio was not unusual in other theaters of war, either. In mechanized warfare, fuel and oil were essential to success, and Allied logisticians solved the problem of adequate petroleum supply. They designed and built the Pipeline under the Ocean (PLUTO) to pump the lifeblood of tanks, trucks, and all other motor vehicles directly to Normandy. Other innovative projects involved prefabricated piers called Mulberries and block ships. The latter were twenty-eight merchant vessels intentionally sunk to provide breakwaters for artificial piers. Most were old, worn-out vessels dating from as early as 1919, though a few were 1943 Liberty ships. In all, 326 cargo ships were involved in D-Day, including two hundred American vessels.

Anglo-American plans involved capture of deep-water ports, such as Antwerp, Belgium. However, British general Bernard Montgomery’s optimistic schedule for capturing the city resulted in greater supply problems for the Allies. Experience in the North African and Mediterranean areas had shown a need for six to seven hundred tons of supplies for each division per day. With thirty-six divisions eventually on the continent, the Allies needed twenty thousand tons of food, fuel, ammunition, and equipment every day.

This article on D-Day logistics is from the book D-Day Encyclopedia, © 2014 by Barrett Tillman. Please use this data for any reference citations. To order this book, please visit its online sales page at Amazon or Barnes & Noble.