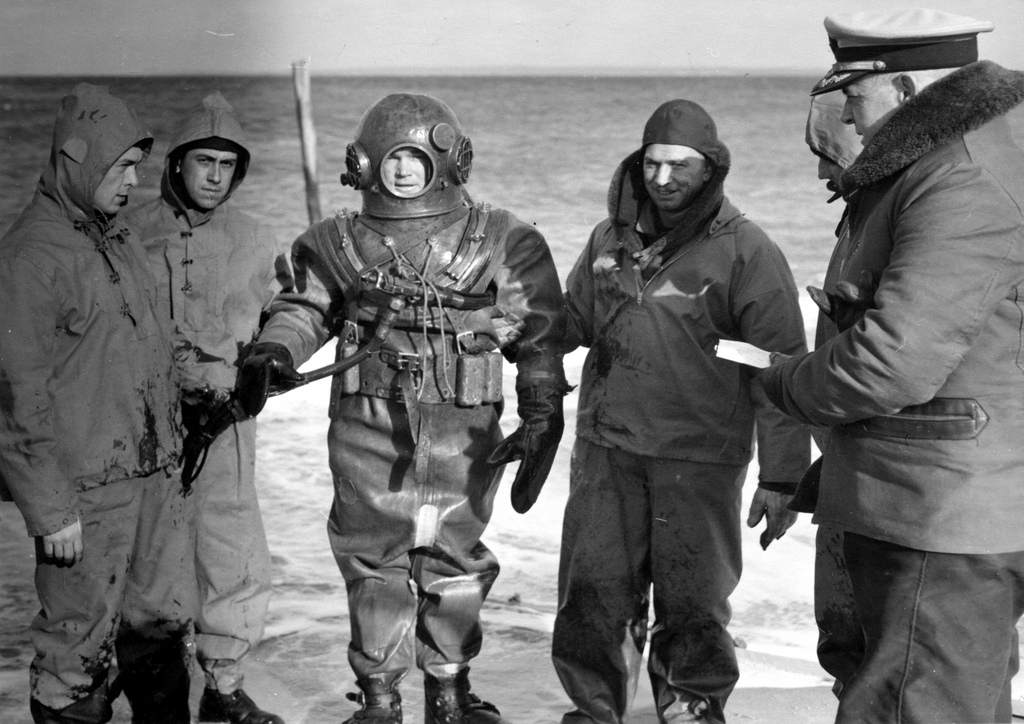 The following article on naval combat demolition units is an excerpt from Barrett Tillman’ D-Day Encyclopedia. It is available for order now from Amazon and Barnes & Noble.

The ancestors of today’s Navy SEALs were the Scouts and Raiders, organized at Fort Pierce, Florida, in May 1942. Their mission was to reconnoiter enemy beaches and obtain information on gradient, soil composition, and the types of defenses. Stealth was their greatest weapon, for they had no means of defending themselves from hostile forces.

Naval combat demolition units (NCDUs) were formed exactly one year before D-Day, mainly volunteer ‘‘Seabees’’ who trained alongside the Scouts and Raiders at Fort Pierce. They were organized by Lt. Cdr. Draper Kaufman, an explosives expert, with the specific goal of clearing beach obstacles from the Atlantic Wall.

Naval combat demolition units were the ‘‘frogmen’’ of World War II, popularly envisioned wearing swim trunks or rubberized suits with a knife strapped to one leg. In fact, the original NCDU men mainly operated from rubber rafts and were not expected to spend long periods in the water. Therefore, Kaufman’s teams wore fatigues, combat boots, and steel helmets. (NCDU equipment is accurately portrayed in Saving Private Ryan.) The men were in excellent physical condition but were not extensively trained as swimmers, because they operated in relatively shallow water.

Kaufman took NCDU-11 (Unit Eleven) to Britain in November 1943; more units followed as training was concluded in Florida. At Omaha Beach sixteen teams, each composed of seven navy men and five army engineers, were tasked to clear fifty-foot-wide corridors through the beach obstacles. One of the first teams ashore was wiped out as it landed, and another lost all but one man as it prepared to set off its lengths of twenty-pound explosive charges. Casualties were appalling: of the 175 NCDU men at Omaha, thirty-one were killed and sixty wounded—a 52 percent loss rate. However, the survivors succeeded in clearing five main channels through the obstacles and three partial channels before the rising tide forced them to withdraw. By the end of the day about one-third of the obstacles had been destroyed or removed.

At Utah Beach, where the defenses were far less concentrated, the demolition sailors sustained four killed and eleven wounded.

The more common image of frogmen was seen in the Pacific theater, where warmer temperatures and deeper water were common. Using face masks and swim fins, UDT men scouted Japanese-held islands, but contrary to the popular image, they did not have self-contained underwater breathing apparatuses. French naval officer Jacques Cousteau developed ‘‘scuba’’ gear only in 1944; its U.S. Navy employment came after the war.

At the British beaches—Gold, Juno, and Sword—naval demolition teams relied heavily on Royal Marine commandos specially trained for the task. Their mission and equipment were similar to their American counterparts, but owing to less efficient defenses the marines sustained proportionately fewer casualties.