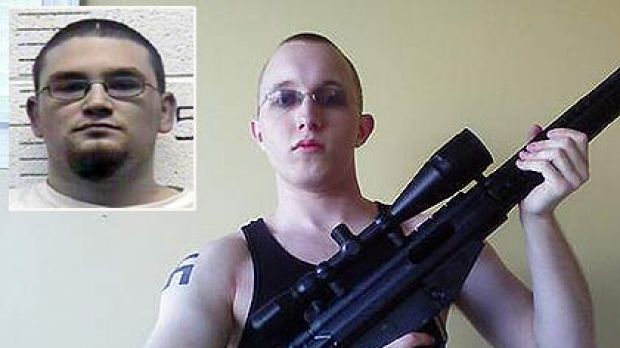 The following article on Daniel Cowart is an excerpt from Mel Ayton’s Hunting the President: Threats, Plots, and Assassination Attempts—From FDR to Obama. It is available for order now from Amazon and Barnes & Noble.

n October 2008, twenty-year-old Tennessean Daniel Cowart and eighteen-year-old Arkansan Paul Schlesselman hatched an ambitious and elaborate plot to kill eighty-eight people and decapitate fourteen African Americans before ending their killing spree with the assassination of Barack Obama. They planned to die in a blaze of glory as they drove toward Obama dressed in white tuxedos and firing out the windows of their car. Cowart’s car was emblazoned with “Honk if you love Hitler,” a large swastika, and the numbers 14 and 88 on the hood.

A friend of the white supremacist skinheads exposed their plans to the Secret Service, which arrested them in October 2008 at Cowart’s grandparents’ home in rural West Tennessee. Police seized a sawed-off shotgun, a high-powered rifle, a handgun, and several swords and knives. They were charged with conspiracy to steal firearms from a federally licensed firearms dealer, illegal possession of a sawed-off shotgun, and making a threat to a major presidential candidate.

This article on Daniel Cowart is from Mel Ayton’s Hunting the President: Threats, Plots, and Assassination Attempts—From FDR to Obama. Please use this data for any reference citations. To order this book, please visit its online sales page at Amazon or Barnes & Noble.