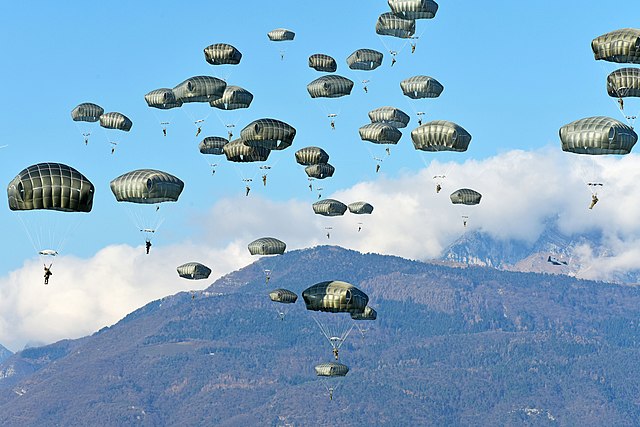 “Paratroopers are about the most peculiar breed of human beings I have ever witnessed. They treat their service as if it were some kind of cult, plastering their emblem on almost everything they own, making themselves up to look like insane fanatics with haircuts to ungentlemanly lengths, worshiping their units almost as if they were a God, and making weird animal noises like a band of savages… [but] generally speaking, the United States Paratroopers I’ve come in contact with are the most professional soldiers and the finest men I have ever had the pleasure to meet.”

This unattributed quote sums up the unique role that paratroopers have played in the wars of the 20th and 21st centuries. With the invention of the airplane, military strategists imaged troops clinging to the wings of Wright Bros. flyers and landing in enemy trenches. Such plans never came to fruition, but technical advances made it possible to drops thousands of soldiers with reasonable safety and accuracy. During WW2, Nazi Germany’s paratroopers (Fallschirmjäger) had incredible success in Norway and the Netherlands, and even rescued Benito Mussolini in a commando mission. Over 22,000 of them were dropped on Crete. Allied paratroopers famously landed in France on the eve of D-Day, making Operation Overlord a possibility.

In this episode, we look at the origins of paratrooping, its function in war, and how it was part of the evolution of military strategy in the 20 century, in which different combat arms were integrated to achieve complementary effects.

"Death From Above – How Paratroopers Evolved From a WW1 Pipe Dream To A Key Part of Combined-Arms Assault" History on the Net
© 2000-2020, Salem Media.
October 20, 2020 <https://www.historyonthenet.com/death-paratroopers-evolved-ww1-pipe-dream-key-part-combined-arms-assault>
More Citation Information.
Loading...