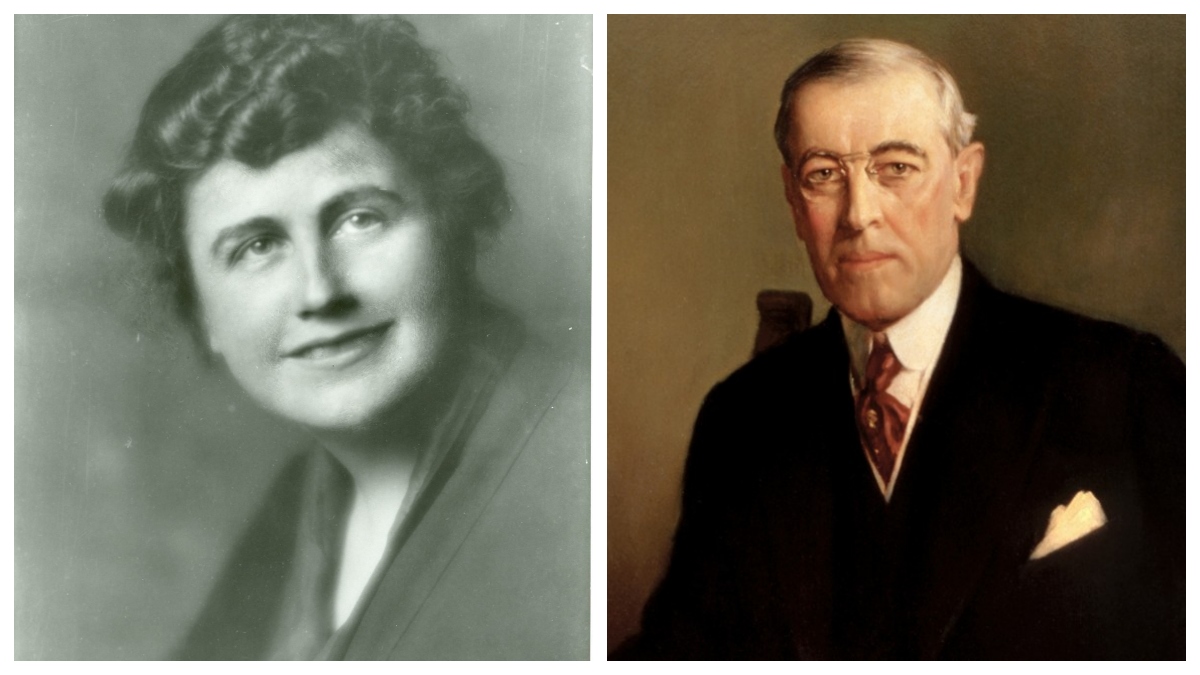 Edith Wilson is a name that may have a hollow echo in the halls of astute history buff’s minds. However, it is likely a name not known, or at least, not as known as it should be among the rest of us.

Mrs. Wilson might strike many as simply a name in the long line of American First Ladies who would, by definition, be overshadowed by their famous husbands. In fact, she was regarded by many to be the “de facto” president when her husband, Woodrow, became very ill in the late years of his presidency. After America’s 28th President, Woodrow Wilson, suffered a massive stroke in October 1919, Edith Wilson took up the mantle acting as the de facto leader. A period she would late describe as her “stewardship”. A distant descendent of the infamous Pocahontas, Edith Wilson was born Edith Galt on October 15, 1872.

According to Brittanica.com, she was the seventh of 11 children born to William Bolling, a lawyer and judge, and Sallie White Bolling. Edith was educated primarily at home and spent two years at preparatory schools in Virginia. Her formal education remained extremely limited, however, and Wilson biographer Arthur S. Link later wrote that her handwriting was “primitive…almost illegible.” In 1896 Edith married Norman Galt, a relative of her brother-in-law, whose family owned a prestigious jewelry store just steps from the White House. One son, born in 1903, died in infancy, and Galt died in 1908, leaving his widow very wealthy. A glamorous and tall figure in her mid-thirties, she became known around Washington, D.C., for driving her own electric car, and police officers reportedly stopped other traffic to let her pass through. She showed no interest in politics or government, however, and later admitted that at the time of the election of 1912, which sent Woodrow Wilson to the White House, she could not have named the candidates.

History.com elaborated on this: Her courtship with Woodrow Wilson lasted just a few months. Having made the acquaintance of Woodrow Wilson’s cousin, Helen Bones, Edith met the recently widowed president during tea at the White House in March 1915. He invited her to dinner a few weeks later and soon began discussing matters of state with his new companion, such as whether or not to declare war on Germany after the attack on the Lusitania in May. The smitten president typed up a press release in October announcing their engagement, which was followed by their wedding on Dec. 18, 1915. Although aides worried that Wilson’s speedy return to the altar would rub the public the wrong way, it proved an insignificant obstacle in his bid to seek a second term in 1916. Thus, she became Edith Wilson.

After President Wilson’s stroke in 1919, History.com went on to write that the administration was eager “… to keep Wilson’s fragile state hidden from the public, [so Edith Wilson] became the sole conduit between the president and his cabinet, determining which matters were important enough to require his attention. The situation killed Wilson’s hopes of drumming up Senate support for the Treaty of Versailles and League of Nations, as Ellen was unwilling and unable to broker any sort of compromise. Despite her best efforts, word of the president’s condition leaked and became a matter of public concern by early 1920.

According to Whitehouse.gov, Mrs. Wilson took over many routine duties and details of government. But she did not initiate programs or make major decisions, and she did not try to control the executive branch. She selected matters for her husband’s attention and let everything else go to the heads of departments or remain in abeyance. In My Memoir, published in 1939, she stated emphatically that her husband’s doctors had urged this course upon her. In fact, according to the Miller Center, she wrote in her 1939 memoirs that as First Lady, she “never made a single decision regarding the disposition of public affairs.” In fact, she claimed powers over only “what was important and what was not” and “when to present matters to my husband.”

In 1921, the Wilsons retired to a comfortable home in Washington, where he died three years later. A highly respected figure in the society of the capital, Edith Wilson lived on to ride in President Kennedy’s inaugural parade. She died later in 1961: on December 28, the anniversary of her famous husband’s birth.