Episode 4: How Lessons From U.S. History Will Help Space Colonies Be More Like Star Trek and Less Like Blade Runner

Listen to this episode on Apple Podcasts

Listen to this episode on Spotify

The human race is about to go to the stars. Big rockets are being built, and nations and private citizens worldwide are planning the first permanent settlements in space.

When we get there, will we know what to do to make those first colonies just and prosperous places for all humans? How do we keep future societies from becoming class segregated, neo-feudal dystopian nightmares (like Blade Runner) and instead become havens of equality and material abundance for all (like Star Trek)? Believe it or not, American colonial history provides us an example of each one.

Today’s guest is Robert Zimmerman, author of “Conscious Choice,” which describes the history of the first century of British settlement in North America. That was when those settlers were building their own new colonies and had to decide whether to include slaves from Africa. 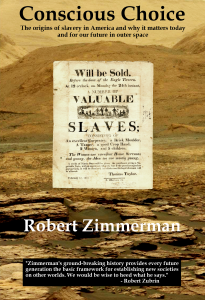 In New England, slavery was vigorously rejected. The Puritans wanted nothing to do with this institution, desiring instead to form a society of free religious families, a society that became the foundation of the United States of American, dedicated to  life, liberty, and pursuit of happiness.

In Virginia however, slavery was gladly embraced, resulting in a corrupt social order built on power, rule, and oppression.

Why the New England citizens were able to reject slavery, and Virginians were not, is the story with direct implications for all human societies, whether they are here on Earth or on the far-flung planets across the universe.