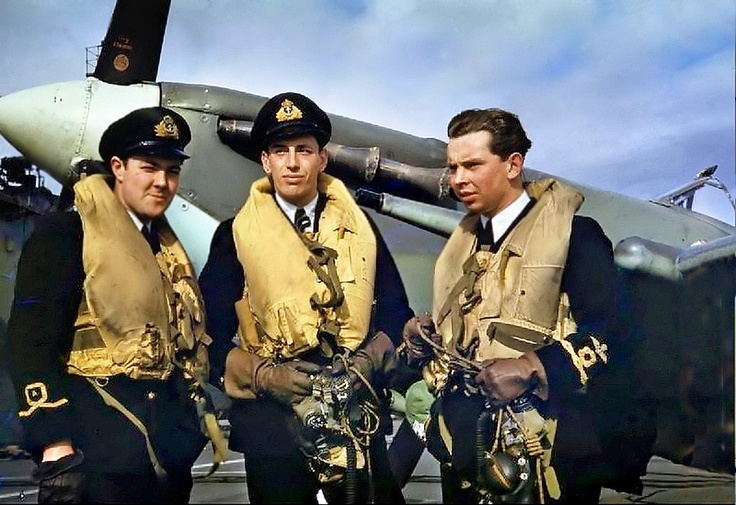 The following article on the Fleet Air Arm is an excerpt from The Hunt for Hitler’s Warship © 2015 by Patrick Bishop. It is available now from Amazon or Barnes & Noble.

In the British military the Fleet Air Arm (FAA) is the branch of the Royal Navy designated responsible for the operation of naval aircraft. It was formed in the years between the world wars, in 1924. Originally under control of the RAF, it 1939 the FAA came under control of the Admiralty and operated aircraft on ships along with land-based aircraft responsible for defending the Royal Navy’s facilities and shore establishments.

The organization struggled in the years leading up to World War Two. The greatest failure to keep pace with technological developments lay in the area of naval aviation. The Admiralty was only now regaining control of the Fleet Air Arm from the RAF, whose equipment programs had given priority to fighters and bombers. The navy was entering the war equipped with biplanes that looked like survivors from the previous conflict.

In the early 1940s Fleet Air Squadrons 817 and 832 made up the striking force that would be thrown at German shipping. They were equipped with Fairey Albacore torpedo planes, the replacement for the Swordfish. The RAF’s interwar control of naval aviation had meant that the navy had inherited a service that was dismally lacking in aircraft and weapons capable of taking on ships. For the first years of the war the men of the Fleet Air Arm were stuck with inadequate and ill-equipped airplanes, which they flew with extraordinary élan and determination despite being profoundly aware of their shortcomings.

An account from Sub-Lieutenant Charles Friend provides a good overview of the conditions of the Fleet Air Arm at the time.

Friend had just arrived on 832 Squadron, his latest posting in an incident-packed war that had included taking part in the air attacks on Bismarck. He was a reservist, a “hostilities only” volunteer. Like many young men of the time he was fascinated by flying, and in 1939 had given up his job as a lab assistant at the Paint Research Station in Teddington, Middlesex, to join the Fleet Air Arm. Friend was a grammar school boy, intelligent and lively. He brought a healthy dose of civilian skepticism with him into the enclosed world of the professional navy. On the whole, though, he found his new life congenial. “I had been made aware of the military virtues of obedience and loyalty in my family and school life as most of us had at the time,” he wrote later. “The loss of complete independence in service life at all levels was compensated for by an abiding sense of belonging to an organization with a purpose.”9 In the early spring of 1942, he was just twenty-one but had already seen enough action to furnish several military careers. As well as the Bismarck operation, he had watched the sinking of the French fleet at Mers-el-Kebir, hunted submarines in the Atlantic, and been aboard the carrier Ark Royal when a U-boat sunk her in the Mediterranean in November 1941.

Friend was an observer, and most of his flying had been done in Swordfishes. He found the Albacore “like a first class version of the Swordfish. It was an improvement on the dear old Stringbag because it had a more powerful engine and it was more aerodynamically efficient.” Unlike the “Stringbag” it had an enclosed and heated cockpit, which represented an enormous improvement to the lives of the crew, particularly in the savage conditions of the Arctic. It also had an automatic life raft ejection system which triggered in the event of the aircraft ditching. One innovation was particularly welcome. The installation of a “P Tube” meant they could relieve themselves in comfort. In the Swordfish, the crew had to make do by filling the empty containers of aluminum dust markers or flame floats, used to determine wind direction and tide speed, before flinging them overboard. It was important to choose the right side, “because over the wrong one, the slipstream opened them and showered the contents back into the cockpit.”

The Albacore already bore an air of obsolescence. It was a biplane, and its fixed undercarriage hung below, dragging through the air and slowing it down. Even with the extra horsepower offered by its new 1,065-horsepower Bristol Taurus II fourteen-cylinder radial engine, it could still only manage a top speed of 150 knots (172 mph) in straight and level flight. Its usual speed was a mere 90 knots (103 mph), which made the observer’s job of navigating easier but severely limited its searching capabilities especially when the wind was against it.

Some pilots felt the controls were heavier than those of the Swordfish and it was harder to take evasive action after dropping a torpedo.10

There were other antiquated touches. The pilot’s seat was just ahead of the upper main plane, and a long fuel tank separated him from the observer. Communication took place via a Gosport speaking tube—a simple length of flexible pipe. Pilots often forgot to connect them. According to Friend, to gain the attention of the man at the controls of a Swordfish, “one simply reached over and banged his head.” In Albacores, though, “we all carried a long garden cane to reach forward past the tank to tap him on the shoulder.” Detailed messages were written down and passed forward in an empty Very signal cartridge stuck on the end of the stick.

Contact among aircraft and back to the ship took place by radio and Morse code and was used only to report a sighting of the enemy or in extreme emergencies. The Aldis lamp was still a useful tool to signal from air to deck or to other aircraft. When flying in formation they “resorted to making Morse with a swung forearm—‘zogging’ it was called.” As protection the Albacore had one fixed forward-firing .303-inch machine gun in the starboard wing, which the pilot operated. The rear cockpit was fitted with twin Vickers K guns operated by a third member of the crew, which delivered more firepower than the Swordfish’s single Lewis gun.

Compared with the Luftwaffe’s sleek Condors and Heinkels, compared with the Japanese Mitsubishi torpedo and bomber aircraft, the “Applecore” was slow and feebly armed. Thus equipped, the Fleet Air Arm could hope to achieve little. Given the quality of its aircraft, it had performed remarkably well. So far, the FAA actions had sunk three Italian battleships and six destroyers, as well as a German light cruiser, largely thanks to the skill and boldness of the crews.

By 1943 the Fleet Air Arm seemed to offer the navy the best hope of success. British naval aviation had at last struggled into the modern era. It had a new monoplane torpedo bomber, the all-metal Fairey Barracuda II, which replaced the wood and canvas Albacore biplanes. The specification for an up-to-date torpedo bomber had been issued in 1937, but the priority given to production of RAF aircraft meant that it did not start reaching the FAA’s squadrons until January. It performed best as a dive-bomber, helped by large flaps that held it steady as it swooped on its target. The Barracudas were supported by a new generation of very effective carrier-borne fighters, American-manufactured Corsairs, Wildcats, and Hellcats.

The FAA had been the target of some sniping from Churchill, who in July 1943 flicked an ill-considered memo at the stolid First Lord of the Admiralty, Albert Alexander, noting the “rather pregnant fact” that out of the service’s 45,000 officers and ratings, “only thirty should have been killed, missing or prisoners during the three months ending April 30.” It seemed “clear proof of how very rarely [the FAA] is brought into contact with the enemy.” This was despite the “immense demands . . .made on us by the Fleet Air Arm in respect of men and machines.”

This article on the Fleet Air Arm is from the book The Hunt for Hitler’s Warship © 2015 by Patrick Bishop. Please use this data for any reference citations. To order this book, please visit Amazon or Barnes & Noble.