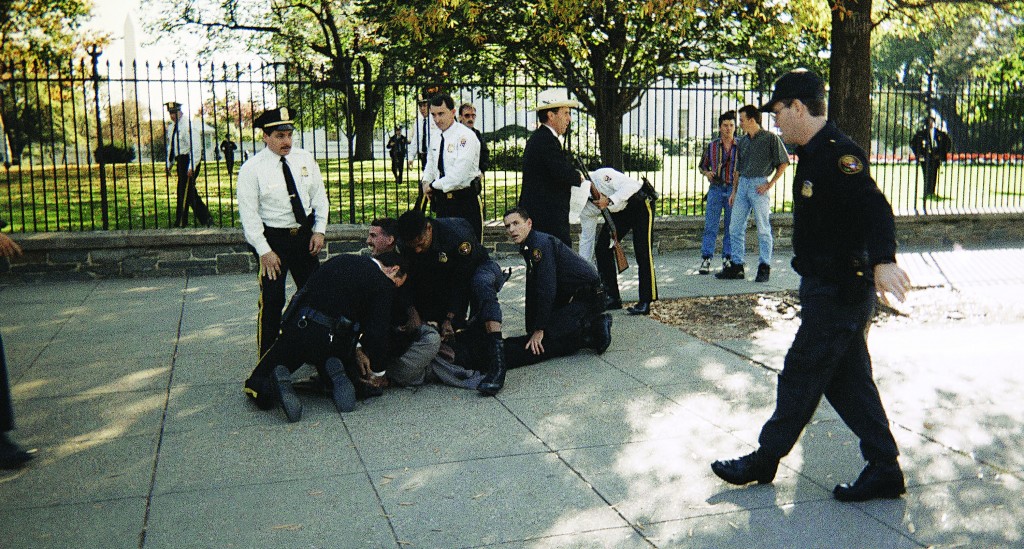 The following article on Francisco Martin Duran is an excerpt from Mel Ayton’s Hunting the President: Threats, Plots, and Assassination Attempts—From FDR to Obama. It is available for order now from Amazon and Barnes & Noble.

In 1994 Clinton was stalked by twenty-six-year-old New Mexico native Francisco Martin Duran. Duran was an army veteran who was dishonorably discharged for aggravated assault with a vehicle and drunk and disorderly conduct

He had fantasies of killing President Clinton with “his hands, very privately and very intimately.” In mid-September 1994, he began to purchase assault weapons, including an SKS assault rifle and about a hundred rounds of ammunition. Two days later, Duran bought a thirty-round clip and had the rifle equipped with a folding stock. Soon thereafter he bought a shotgun and more ammunition.

On September 30, Duran left work and, without contacting his family or employer, drove to Washington, D.C., in his 1989 Chevrolet S-10 pickup truck. His wife filed a missing person’s report with the sheriff’s office on October 1, the day after her husband disappeared. By October 10, Duran was in Charlottesville, Virginia. The following day he bought a large trench coat and another thirty-round ammunition clip in Richmond, Virginia, before driving to Washington, D.C., and checking into a hotel. Duran moved around various hotels in the Washington area between the tenth and the twenty-ninth of October.

On the morning of Sunday, October 29, Duran checked out of the Embassy Suites Hotel in Tysons Corner, drove to downtown Washington, and parked his truck on 17th Street, between D and E Streets. He walked to the White House and watched President Clinton return to the executive mansion from his Middle East visit via a helicopter that landed on the White House lawn. By early afternoon Duran was in front of the north side of the White House, wearing the overcoat he had purchased earlier.

Around 3:00 p.m., as Duran stood by the White House fence, sightseers and tourists walked along Pennsylvania Avenue in front of the White House. Two boys who had been standing at the fence remarked aloud that one of the men standing near the North Portico of the White House looked like President Clinton. Within seconds Duran, who by then had been staring at the executive mansion for more than an hour, pushed the boys aside, slipped a semiautomatic assault rifle from beneath his coat, extended its folding stock, and began firing at the person he mistakenly believed was Clinton. “I watched him place it between the bars of the fence,” said corrections officer trainee Kenneth Alan Davis, “and he just opened fire.”

Running back and forth along the fence as he fired, Duran quickly emptied a clip of thirty rounds at his intended victim as bystanders scattered in panic. Five bullets hit the mansion’s four-footthick sandstone wall, and three shattered a window and chipped the stone of the Press Briefing Room near the West Wing. No one was injured. When Duran stopped to insert another thirty-round clip, a bystander, security expert Michael Rokosky, tackled him from behind as the gunman tried to reload his rifle. “I thought, ‘I’m probably not going to get a better opportunity to tackle him,’” he said, “so I did.” As they struggled on the sidewalk, two other bystanders joined Rokosky and helped him to subdue Duran before uniformed Secret Service officers arrived.

Duran fired at least twenty-nine rounds before he was subdued. As he was being handcuffed by Secret Service agents, Duran said, “I wish you had shot me.” President Clinton was watching a televised football game on the opposite side of the White House, unaware of the shooting.

During their investigation of Francisco Martin Duran’s attack, Secret Service agents impounded his brown pickup near the White House and found one of the rifles he had purchased en route to Washington, several boxes of ammunition, a nerve gas antidote, a handwritten document with the heading “Last will and words,” an order form for the book Hit Man, and several books about out-of-body experiences. They also found a number of items that clearly revealed his intention to assassinate Clinton, including a letter in which he had written, “Can you imagine a higher moral calling than to destroy someone’s dreams with one bullet?” a road atlas on which he had written “Kill the Pres,” and a cover torn from a telephone book that bore a picture of President Clinton with a circle drawn around his head and an “X” on his face.

Duran was charged with attempting to assassinate President Clinton. He pleaded not guilty and mounted an insanity defense, claiming that he was trying to save the world by destroying an alien “mist” connected by an umbilical cord to an alien in the Colorado Mountains. He also claimed to be incited by ultraconservative talk show host Chuck Baker, who spoke on air about “armed revolution” and “cleansing” the government.

But the jury wasn’t buying it. In April 1995, after deliberating nearly five hours, jurors convicted Francisco Martin Duran of trying to assassinate President Clinton. They rejected the insanity defense, and he was sentenced to forty years in federal prison. U.S. District Judge Charles R. Richey said such crimes “cannot be tolerated in a free society.” Before imposing the sentence, Richey read parts of a letter that he had received from Ronald K. Noble, a Treasury Department official with supervisory authority over the Secret Service. The semiautomatic rifle shots fired by Duran, Noble’s letter said, marked “the first shooting directed at the White House in over 150 years.” Noble told Richey that Duran’s actions “were an assault on all people of the United States, as well as on the President.”

This article on Francisco Martin Duran is from Mel Ayton’s Hunting the President: Threats, Plots, and Assassination Attempts—From FDR to Obama. Please use this data for any reference citations. To order this book, please visit its online sales page at Amazon or Barnes & Noble.