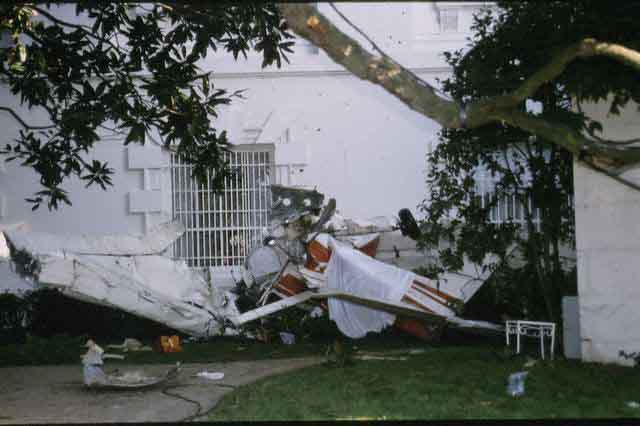 The following article on Frank Eugene Corder is an excerpt from Mel Ayton’s Hunting the President: Threats, Plots, and Assassination Attempts—From FDR to Obama. It is available for order now from Amazon and Barnes & Noble.

During Bill Clinton’s first seven years in office, the Secret Service made arrangements for 2,500 appearances in more than eight hundred cities in the United States and abroad, as well as 450 appearances at public events in the Washington area. During this period, the Secret Service Research Division maintained a list of “several thousand” Americans who were “presidential threats.”

More than four hundred were on the “watch list” of “dangerous” individuals. Several hundred weapons were detected each year—almost all of them carried lawfully by people who had state permits. Those who were discovered to be carrying weapons illegally were usually taken to police headquarters and charged with a misdemeanor.

There were a number of incidents that the media characterized as “threats” but were unconnected to any assassination attempt. A few incidents, in particular, received a lot of attention. In the early morning of September 12, 1994, a Cessna 150L airplane crashed onto the South Lawn of the White House, killing the pilot, thirty-eight-year-old Frank Eugene Corder, but injuring no one else.

The plane came to a halt against the south wall of the White House, causing minimal damage. President Clinton and his family were not home at the time. The Clintons were spending the night across Pennsylvania Avenue at Blair House while White House workers repaired faulty duct work. There was no evidence Corder, who had been drinking and smoking crack cocaine at the time he flew the plane, ever intended to kill Clinton or had been angry with his policies. Rather, according to informed associates, he simply wanted to die crashing his plane into the White House.

Corder failed in his apparent task of threatening the president, but he certainly received the media attention that he sought.

This article on Frank Eugene Corder is from Mel Ayton’s Hunting the President: Threats, Plots, and Assassination Attempts—From FDR to Obama. Please use this data for any reference citations. To order this book, please visit its online sales page at Amazon or Barnes & Noble.