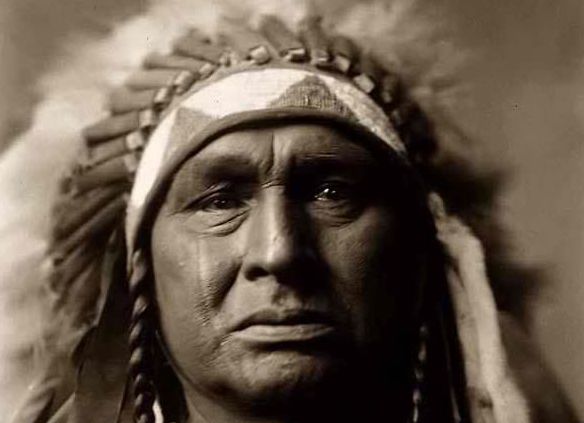 The following is a guest post from Shannon Murphy. You can read more articles at her site History Minded.

Tradition dictates that Plains Indians must complete four requirements (coup) before a man can become a war chief. They must touch an enemy without killing them, take an enemy’s weapon, lead a successful war party and survive, and steal an enemy’s horse. The last man to accomplish all four requirements was Joe Medicine Crow during World War II.

Joe Medicine Crow was raised by his maternal grandfather Yellowtail in the Crow warrior tradition. At a young age, his grandfather had him running laps around the house in the snow barefoot to toughen his feet and would have him bathe in frozen rivers as a part of his healthy living program. Medicine Crow grew up listening to stories of the Battle of Little Bighorn from Crow scouts who had been present at the battle, including his great uncle, White Man Runs Him, who served as a scout for George Armstrong Custer.

In a time when the Crow tribe was being devastated by disease, hunger, and the constant attempt by others to strip tribal children of their heritage, Medicine Crow saw education as the solution needed to reverse the harm done to his people. A Crow chief, Plenty Coups, told him “with education, you can become a white man’s equal; without it, you will be his victim.” Medicine Crow saw that as a challenge and began working to disprove the belief that Indian’s were not capable of becoming a good college student or achieving a college degree.

Joe Medicine Crow graduated from Linfield College in Oregan in 1938, then a year later received his Master’s degree in anthropology from the University of Southern California. He was the first person from his tribe to earn a graduate degree, specializing in the effects of European culture on Native Americans. His thesis, “The Effects of European Culture Contact upon the Economic, Social, and Religious Life of the Crow Indians” is the most widely read source on Crow culture.

After the attack on Pearl Harbor, Medicine Crow left his doctoral studies and enlisted in the Army, joining the 103rd Infantry. He told the Billings Gazette “We were a war-faring people. Naturally, I thought about the famous warriors when I went to Germany. I had a legacy to live up to.” He became known for going into battle wearing war paint under his uniform and an eagle feather beneath his helmet.

Medicine Crow did not go into battle planning to accomplish honor through acts of bravery or counting ‘coup.’ His goal was to be a good soldier and perform honorably in combat if the situation arose.

During an offensive into Germany, Medicine Crow’s commanding officer ordered him to gather a group of men to return to the French side of the border to gather boxes of dynamite that were needed to destroy a German bunker. The hill Medicine Crow and his fellow soldiers would have to climb was covered in land mines and hidden bombs. They would have to avoid the bombs and exploding mortar shells launched by enemy forces. “Well Chief,” his commanding officer told him after giving Medicine Crow his orders. “I guess if anybody can get through, you can.” Under the cover of a smokescreen, Medicine Crow and six of his friends set out. Despite the obstacles in his way, Medicine Crow accomplished his mission without losing a single man. This became his first coup.

The most notable coup for a Plains Indian to accomplish was to touch an enemy and escape unharmed. While scouting an alley in Germany, Medicine Crow literally ran into a German soldier. He disarmed the soldier, knocking the man to the ground and sending his rifle flying. Medicine Crow kicked the rifle further away as the German soldier reached for it before dropping his weapon and putting his hands around the German’s throat. He was ready to kill the soldier when, in a scared voice, the soldier started yelling “Hitler Kaput! Hitler Kaput! Hitler nicht gude!” meaning “Hitler dead! Hitler dead! Hitler no good!” Medicine Crow felt sorry for the crying German, he let the soldier go despite the objections of his fellow scouts. During this one confrontation, he completed two coups.

His final coup was accomplished at the end of the war. His company followed a group of SS officers as they rode horses back to a small farm where they were staying for the night. While Medicine Crow had not planned on counting the coup, he had been looking for a chance to capture a horse. He believed it was the best way he could prove he was worthy of his ancestors. Medicine Crow approached his commanding officer with his idea of stealing the officer’s horses. Since it had been decided they would attack the farm at daybreak, Medicine Crow suggested it would be best to remove the horses ahead of the attack to prevent the officers from escaping. After receiving permission, Medicine Crow and one of his friends snuck into the corral. He climbed onto the back of one horse and released a Crow war cry as his friend opened the corral, sending the horses stampeding into the night.

When he returned from the war the tribe elders asked him to recite his war deeds. While Medicine Crow had never thought of his actions in the terms of ‘war deeds’ he recited his exploits during the war, not knowing that he had accomplished every requirement necessary of becoming a war chief. He was shocked when the elders told him “You have completed the four deeds.”

In 1948, Medicine Crow was appointed tribal historian and anthropologist. He served as the last living link to the Crow’s pre-reservation way of life and history, and served on historical and educational commissions as well as authoring almost a dozen books on Crow culture. In 2003 the University of Southern California presented him with an honorary Doctorate and in 2009 President Obama awarded Medicine Crow the Presidential Medal of Freedom. Obama honored himby noting that “his life not only reflects the warrior spirit of the Crow people but America’s highest ideals.’