Heinrich Himmler: The Reich Leader Of The Nazi Party

Heinrich Himmler was born into a Roman Catholic family in Munich, Germany on Oct 7th, 1900. 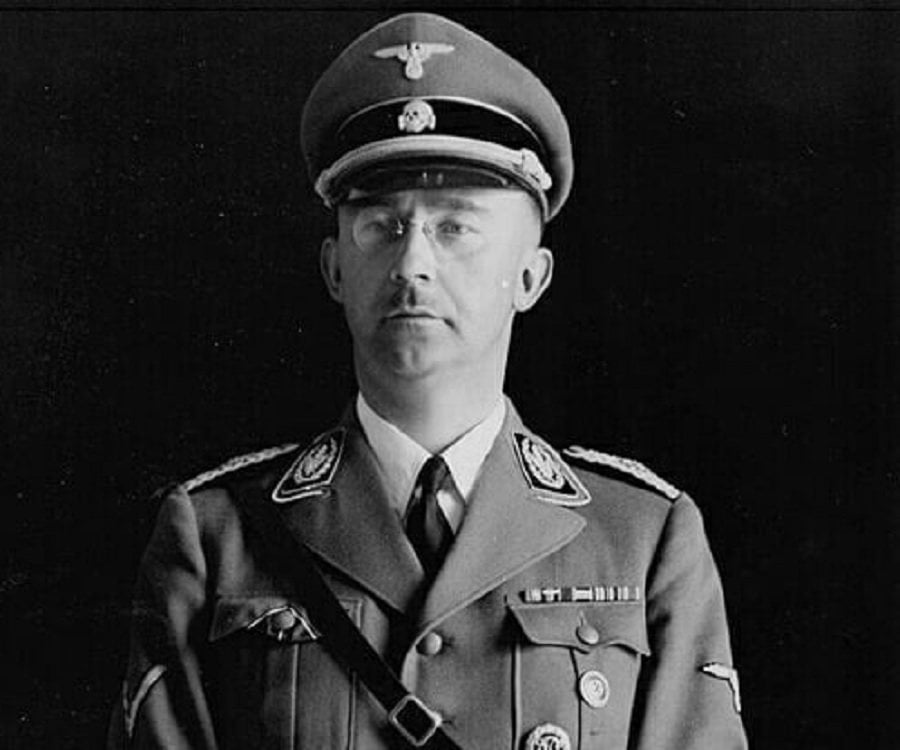 His father, Gerbhard Himmler, was a very religious and authoritarian schoolmaster that ran his family like he ran things at the school. When Heinrich Himmler was two-years old he got a major lung infection, so his doting mother took him to the countryside for cleaner air. He would be a sickly child for the rest of his childhood. It is claimed that due to his frequent illnesses, he was spoiled and allowed to have most of what he wanted. He was described as physically weak and loner by people that knew him.

One of his early biographers, Willi Frischauer, said that his father would make the family read German history every night. Heinrich Himmler was so versed in German history that he could recite the names of all the famous German battles and who led them. That would later give rise to his fervent nationalism and hatred for how World War I ended. That ending, along with the Great depression would be a catalyst of the horror around the world that was coming.

In 1916, Himmler would join the Jugendwehr, which was the youth defense. Its purpose was to condition the youth to be defenders of Germany and to prepare them to enter the war when they became old enough. He would graduate from high school in 1918 and take a job as assistant principal of a gymnasium near Munich. Himmler’s patriotism would lead him to attempt to join the German Army fighting in World War I, but by the time he was old enough and able to join the military, the Treaty of Versailles had been signed where Germany acknowledged they lost and the Allied powers placed a lot of restrictions on Germany. That loss, and the agreement that was signed, was felt by the German people to be an attempt to embarrass Germany. Germany already had a strain of intense nationalism that had been growing for decades. However, the German President at the time, Paul Von HIndeburgh was able to keep a check on the far-right nationalists led by Adolf Hitler. Once the President died that check was gone and Hilter’s rise would be complete with a young Himmler at his side.

In the early 1920s, Himmler worked in a manure processing plant near Munich. That would bring him into contact with the Nazi party that had a strong presence in Munich at the time. In August of 1923, Himmler would join the Nazi party, which was the same year Hilter attempted a coup, which is known as the Beer Hall Putsch. The coup failed and Hitler would be jailed for crimes against the state. During that time, Himmler would use it as a way to increase his name recognition in the Nazi party by giving speeches and adding members.

In the 1920s, like many countries around the world, their economies grew. Even in Germany, which was dealing with the harsh terms of the Treaty of Versailles, saw the quality of living develop in Germany. When people are making money it is hard of nationalists and populists like the Nazis to scapegoat people, so the Nazis were unable to make any gains in parliamentary elections. Himmler would leave the party for a few years and work as a chicken farmer, but in 1926 he would return to joining the SS, who were Hitler’s private body guards. In 1929, Hitler would appoint him head of the SS, a decision that would prove to be a fateful one. This was a great role for an ambitious nationalist like Himmler because it would give him constant access to the party’s leader, Adolf Hitler. Many believed that Himmler was too nerdy and bookish to be a strong leader, but by this time he had become a radical fanatic on Nazism. He also took after his father, who believed strongly in order and discipline. He would enforce that discipline on the SS and it would gain strength that would rival the much larger SA. When Heinrich Himmler took over the SS, it totaled 280 men. But by 1933 it had over 52,000. Hitler, as most dictators do, liked control, but he gave Himmler mostly free reign over his organization. That may have stemmed from Himmler’s non-threatening appearance and his devotion to Hitler.

One major tenet of Nazi ideology was extreme hatred for Jews. Germany had always had a large population that hated Jews, but after the Great Depression began in 1929, it was easier to scapegoat them with the majority of Germans. Scapegoating Jews was nothing new. There were even large strains of that in the United States at the time. A lot of that had to do with Christian beliefs that had been manifesting for decades that considered Jews the murders of Jesus, even though Jesus was a Jew. When Martin Luther declared independence from the Catholic Church on October 13, 1517 with the publication of the Ninety-five Theses. He had a softer view of Jews than Catholics and tried to convert them. When they refused, he lashed out against Jews, so they started getting called devil worshippers by the Protestants, as well as Catholics.

Hatred towards Jews was never a dominant form in Christian churches, but strains of it were prominent in many places, and Germany was a hotbed for anti-Jewish sentiment. That fact that many Jews had become successful in business made it easier to scapegoat them as greedy Capitalists. In Germany, that is certainly what happened with the onset of the Great Depression in 1929. Hitler took full advantage of the underlying distrust of the Jews in Germany to increase his power base and eventually take over the country.

In 1932, Hitler’s Nazi party would win 37.3 percent of the vote in Parliament, which was the largest of any party. A reluctant President Von Hindenburg would appoint Hitler Chancellor, who is head of government in Germany. Hitler would amass great power and became a dictator after Hindenburg died. With unlimited power with the Nazis, this gave almost total free reign to Himmler to complete his plans of exterminating the Jews. They would declare Jews a race, no longer just a religion, and that race would be inferior to the white, Christian race, called the Aryans. That is where the term anti-Semitism became more widely used since semite is a racial term.

In 1933, Himmler would establish the first concentration camp where political prisoners and Jews would be sent to. Himmler helped organize the murder of Ernst Röhm, who was the head of the SA. It would be called The Night of the Long Knives. Hitler would then place Himmler in charge of the SA, making him one of the most powerful men in Germany. Hitler’s total trust in Himmler would eventually make him the second most powerful man in Germany by the end of the 1930s. He would use his fanaticism, hatred for the Jews, and his keen ability to organize, to work to destroy the Jewish population and perform war crimes that are among the severest in history to this day.

It was Himmler, with approval from Hitler, to begin to exterminate the Jews on a mass scale, which has been dubbed the Final Solution by the Nazis. He was also one of the few Nazi leaders that actually would oversee that extermination himself by personally witnessing it. Even Hitler, as sadistic as he was, never went to a concentration camp himself. Himmler even had dogs trained to tear people apart. He enjoyed watching the pain of others and would watch them killed like he was a spectator at a concert. He would be quoted as saying in a 1943 speech regarding the mass extermination of the Jews:

“We have never conversed about it amongst ourselves, never spoken about it. Everyone shuddered, and everyone was clear that the next time, he would do the same thing again if it were necessary. I am talking about the ‘Jewish evacuation’: the extermination of the Jewish people. It is one of those things that is easily said. “The Jewish people is being exterminated,” every Party member will tell you. “Perfectly clear, it’s part of our plans, we’re eliminating the Jews, exterminating them. Ha! A small matter.”… But altogether we can say: We have carried out this most difficult task out of love for our people. And in doing so, we have taken on no defect within us, in our soul or in our character.”

Himmler would order the execution of nearly 2,700,000 Jews, political prisoners, and others that they deemed undesirable, by either asphyxiation, gas, shooting, or dogs.

As it was obvious the Germans would lose in 1945, Himmler tried to negotiate a way out of getting convicted of war crimes. He would offer his surrender to General Dwight D. Eisenhower, but Eisenhower knew he could never accept that from such a war criminal as Himmler. Once Hitler heard of that offer, he revoked all titles from Himmler. Hitler and Himmler were staunch allies in the murder of entire populations of people, but towards the end, they turned on each other. Himmler would try to escape Germany but was captured by the Russians. Before trial, he would take a cyanide pill and kill himself. A suitable end for a coward who could not face what he had done. It is estimated that Himmler had over 6 million Jews killed from within Germany and the countries they conquered during the war. He will go down as one of the worst war criminals in history.