The History of Slavery, Part 1: Shackled and Chained in the Ancient World

History » Podcast Episodes » The History of Slavery, Part 1: Shackled and Chained in the Ancient World 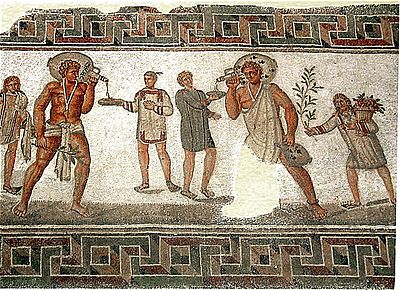 When asked “what is slavery,” most Americans or Westerners would respond with a description of an African slave in the antebellum South, picking cotton and suffering under the whip of a cruel master. But if you asked an Irishman in 1650, he would have answered differently. He would recount the horrors of Barbary Muslim pirates invading the town of Baltimore, dragging his kinsmen off to the slave markets of Algeria. A medieval Arab would have still answered differently. He would talk about the African slave trade, albeit the one that went east to Arabia instead of the one that went west to the New World. A Roman would have described slavery as the Greek in his household that tutored his children.

Slavery goes back to the beginning of the agricultural revolution. It is universal yet localized to the particular conditions in the society that enslaves others. Some researchers think slavery is common across history in that it leads to the social death of a slave. Others think that slaves were treated rather well in the ancient world, and it was only the weaponized racism of recent centuries that turned the chattel slavery of Africans brought to the New World into such a cruel institution.

This episode is the beginning of a five-part series on slavery. We are looking at the origins of the practice, why it began, the work that slaves did, what was the “best” sort of work, and how they revolted. By looking into the past we will have a better understanding of this practice, and how much it resembles slaver in the modern world.

Long, A. A. Epictetus: A Stoic and Socratic Guide to Life. Oxford University Press, 2002.

Riley, James. An Authentic Narrative of the Loss of the American Brig Commerce: Wrecked on the Western Coast of Africa, in the Month of August, 1815. With an Account of the Sufferings of Her Surviving Officers and Crew, Who Were Enslaved by the Wandering Arabs on the Great African Desart, Or Zahahrah; and Observations Historical, Geographical, &c., Made During the Travels of the Author, While a Slave to the Arabs, and in the Empire of Morocco. The author, 1817.

“Skeletons on the Zahara: A True Story of Survival: Dean King.”

“Who Is Epictetus? From Slave To World’s Most Sought After Philosopher.” Daily Stoic | Stoic Wisdom For Everyday Life (blog), July 10, 2016. https://dailystoic.com/epictetus/.

A new adventure book reflects the idea that the American Revolution belonged to the world.

“The Colonials,” by Tom Durwood, follows six young protagonists as they join the war for liberty and equality in a coming-of-age epic. His teen heroes come from China, Turkey, Russia, Germany, France, and the Netherlands. “I wanted to show that the American War of Independence,” says author Durwood, “was not so much an American event as a global event.”