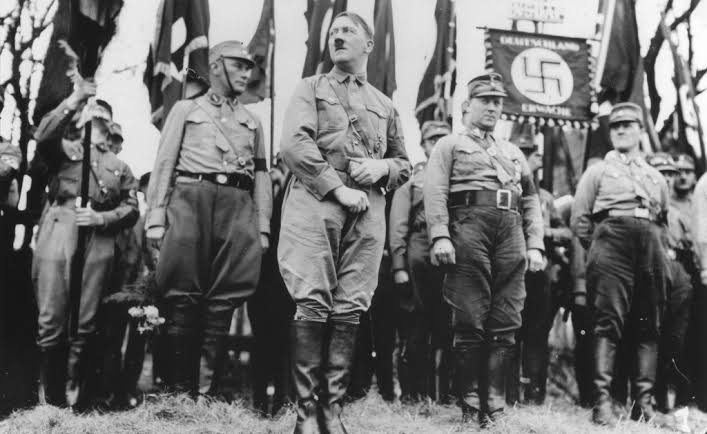 Hitler’s Rise to power began in Germany in September 1919 when Hitler joined the political party then known as the Deutsche Arbeiterpartei – DAP (German Workers’ Party).

Adolf Hitler, who had come to power in Germany in 1933, over the course of the decade unilaterally overturned a great many provisions of the Treaty of Versailles imposed on Germany at the end of World War I. Hitler:

Hitler also bullied the West into allowing him to annex the Sudetenland, a largely German-inhabited region of Czechoslovakia, and alienated Western opinion by going on to occupy nearly all of Czechoslovakia.

When Germany began making demands on Poland in 1939—such as the return of the city of Danzig, whose loss the British had long considered one of Germany’s most understandable grievances from the Versailles Treaty—Britain and France decided to give the Poles a fateful war guarantee. Bolstered by British and French encouragement, Poland remained obstinate in the face of German demands, and on September 1, 1939, Germany invaded Poland. In practice, there was nothing the British or French could do to save Poland. By the following year Hitler had acquired quite a list of European conquests, though the only militarily significant power he had defeated was France.

During the nearly two and a half years of World War II in which the United States was not involved, President Franklin Roosevelt portrayed himself as engaged in a strenuous effort to keep America out of the war. He said so as soon as the war broke out in 1939, and he continued to say so as the months and years passed. He famously declared in October 1940, “I have said this before, but I shall say it again and again and again: Your boys are not going to be sent into any foreign wars.” “The first purpose of our foreign policy,” he assured Americans several days later, “is to keep our country out of war.”

Nothing could have been further from the truth. FDR was busy making secret pledges to the British, provoking Germany into attacking the United States (and then lying about it), and assisting the British in ways that violated at least the spirit of American neutrality legislation and which, according to international law, effectively made the United States a belligerent.