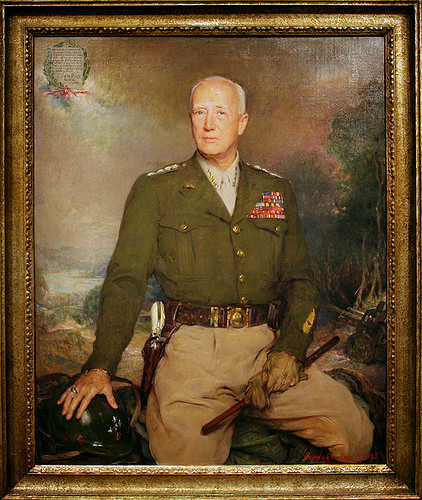 How did Patton die? The short story is that he sustained spinal cord and neck injuries in an automobile accident near Neckarstadt, Germany. He passed away from pulmonary embolism as a result of the accident.

How did Patton die? The long story

On December 9, 1945, Patton was returning from a pheasant hunt with his chief of staff, Major General Hobart “Hap” Gay. Sergeant Mims, his regular driver, was in the hospital, and a substitute was at the wheel. They were traveling at about thirty-five miles per hour when an army truck turned from a side road into their path. In the glancing collision, Patton was thrown against the roof and fell forward into the glass partition behind the driver’s seat. His neck was broken.

Paralyzed from the neck down, he was taken to a hospital in Heidelberg. “This is a helluva way to die,” Patton told Gay. In the hospital, Patton’s mood alternated between profanity-laced anger and black humor. “If there’s any doubt in any of your Goddamn minds that I’m going to be paralyzed for the rest of my life, let’s cut out all this horse-shit right now and let me die,” Patton lashed out.

He just as quickly changed moods, joking, “Relax, gentlemen, I’m in no condition to be a terror now.” When he was informed that the hospital chaplain was there to pray by his side, Patton responded, “Well, let him get started. I guess I need it.” The chaplain entered, said a few prayers and Patton thanked him.

Beatrice flew to her husband’s side after ordering that her children remain at home. She seemed to want her husband to herself one final time. As they visited, Patton told his wife, “I guess I wasn’t good enough.” She knew he was referring to his desire to die in battle, as his ancestors had done.

On December 21, Beatrice read to Patton from John Steinbeck’s novel The Red Pony. He asked her what time it was, and when she told him, he said that he was tired and told her she should go eat dinner; they could finish the chapter when she returned. She went to the dining room, leaving her husband with the attending nurse.

Beatrice’s dinner was interrupted when the nurse suddenly noticed that Patton had stopped breathing. When she returned, her husband had already died. The official cause of death was pulmonary edema and congestive heart failure.

General George S. Patton Jr. was buried at mid-morning on December 24, 1945, in a grave dug by German prisoners of war. He was laid next to a Third Army soldier who had been killed in combat during the Battle of the Bulge. A United Press correspondent reported: Patton was buried in what he himself once called “damned poor tank country and damned bad weather.” But he was buried in precision-like military ceremony, touched by pomp and tendered by grief. Big generals and little soldiers were there, as were the royalty and the commoners of this tiny country from which Patton drove the Germans in that crucial battle last Christmastide.

This article, which discussed how did Patton die,  is from the book Patton: Blood, Guts, and Prayer © 2012 by Michael Keane. To order this book, please visit its online sales page at Amazon or Barnes & Noble.