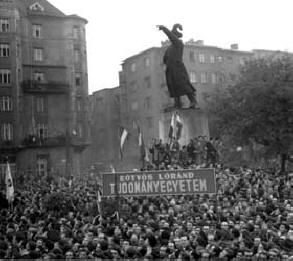 Following the death of Josef Stalin in 1953 many European communist countries developed liberal reformist factions. In Hungary the reformist Imre Nagy became Prime Minister but his attempts at reform were thwarted by Rákosi General Secretary of the Communist party. Rákosi used every opportunity to discredit Nagy  and in 1955 had him removed from office. In July 1956 Rákosi was deposed and replaced by Erno Gero.

In Poland a revolt staged in June 1956 had resulted in reformist concessions being granted by Russia on October 19. News of the Polish concessions encouraged Hungarians who hoped to win similar concessions for Hungary.

On the afternoon of 23rd October 1956 thousands of Hungarian students took to the streets protesting against Russian rule. Their 16 key demands included a return to power of Imre Nagy, free elections and evacuation of all Soviet troops.

By early evening the number of protestors had grown to 200,000. At 8pm Erno Gero made a broadcast condemning the demands as lies and stating that the country did not want to sever its ties with Russia. Angered by the broadcast some demonstrators tore down the statue of Stalin while others marched to the Radio building and attempted to gain access. The security police (?VH) threw tear gas on the crowd and opened fire killing some demonstrators. In response the demonstration became violent, communist symbols were destroyed and police cars set alight.

The new Hungarian government immediately set about implementing its policies which included democracy, freedom of speech, and freedom of religion. Nagy also announced that Hungary would withdraw from the Warsaw Pact.

On 1st November Nagy received reports that Russian tanks had entered eastern Hungary. On 4th November the tanks reached and encircled Budapest. Nagy made a broadcast to the world that Hungary was under attack from Soviet forces hoping that maybe help would come from the West. However, at the time Britain and France were preoccupied with the Suez Crisis and Americans did not want a return to war.

Around 4000 Hungarians were killed between 4th and 10th November when the Russians took control. Nagy initially sought refuge in the Yugoslavian embassy but was later captured by the Russians. He was executed in June 1958.

23rd October is a national holiday in Hungary.