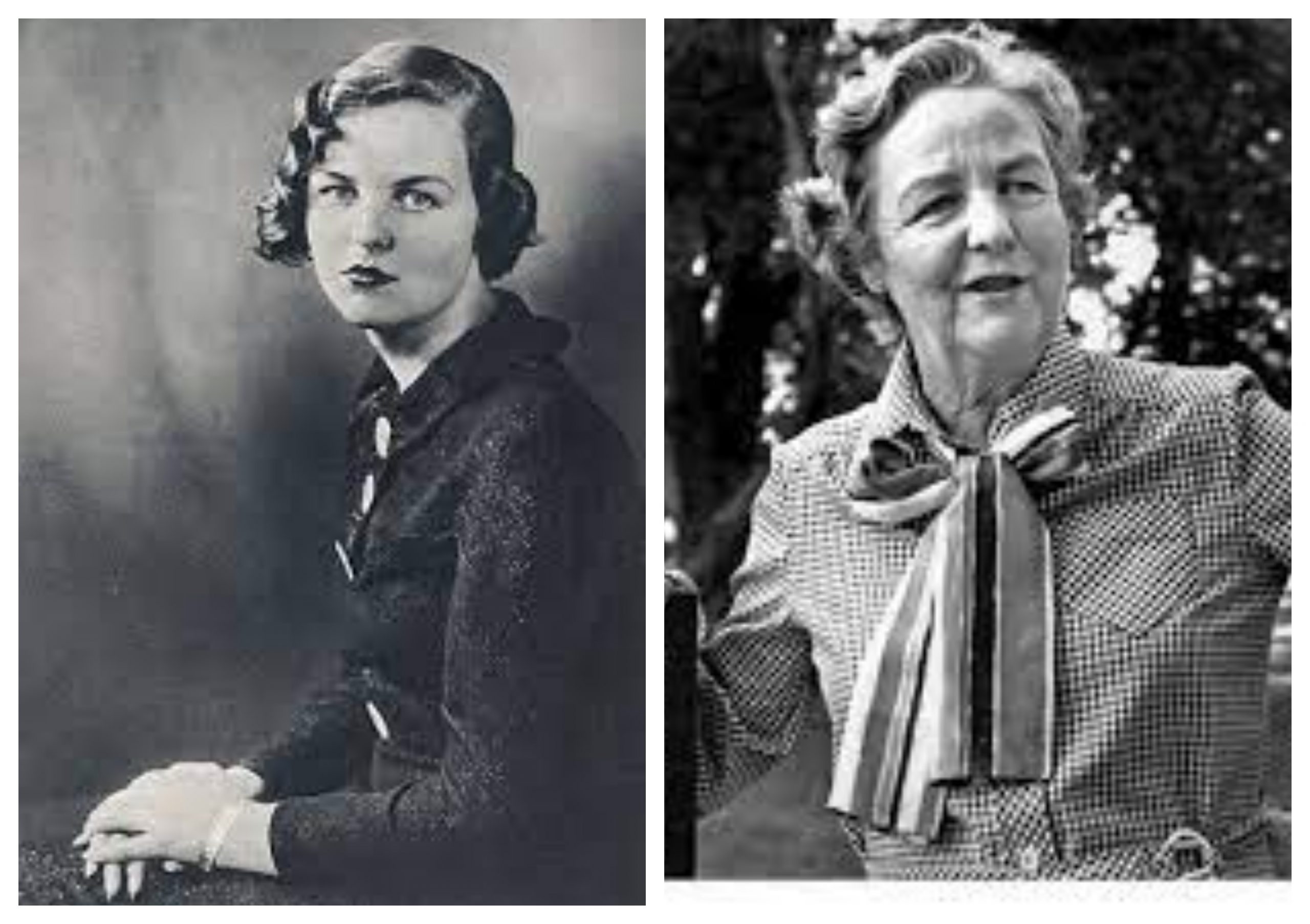 Jessica Mitford brought a much-needed wit and excitement to “serious” work such as politics and journalism.

As the late journalist Christopher Hitchens, who interviewed Mitford in 1988, stated that through Jessica Mitford, he learned that “It’s possible to write as a radical and as a committed person, without ever being dull, or boring, or condescending. And that’s a lesson that a lot of people also learn and could well learn from Jessica Mitford”. No small compliment, especially coming from the man who was stalwartly unimpressed by the likes of Mother Teresa or Princess Diana. 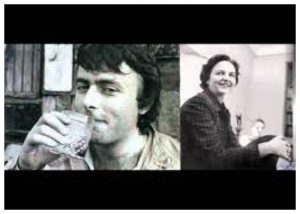 Jessica Mitford was born on September 11th, 1917, in Glouchester, England. One mustn’t forget that she was the daughter of Lord Redesdale. Mitford was the second eldest of what would be known to history simply as the Mitford sisters.

Their notoriety would be due to their privileged upbringing, as well as, at times, their diametrically opposed political philosophies. Ben Macintyre of The Times, couldn’t have been more precise and succinct when he wrote that there was “Diana the Fascist, Jessica the Communist, Unity the Hitler-lover; Nancy the Novelist; Deborah the Duchess and Pamela the unobtrusive poultry connoisseur”. 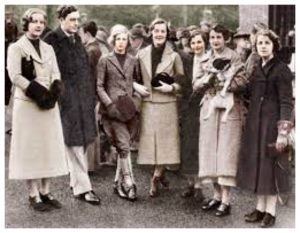 Jessica, or “Decca” as she was known to friends and family, in particular, seemed to eschew her privileged upbringing in favor of adopting communism as her preferred way of trafficking in the world. This led Decca to playfully refer to herself as the “red sheep” of the family.

It wasn’t until 1960 that Mitford published her first book, “Hons and Rebels”, published in the United States as “Daughters and Rebels”, which was an autobiography on her life, with particular emphasis paid to the fraction and schism that erupted between the sisters early on in their lives. 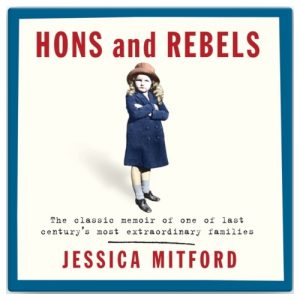 In a notable excerpt from the book, Mitford remarked, In the windows, still to be seen, are swastikas carved into the glass with a diamond ring, and for every swastika a carefully delineated hammer and sickle. They were put there by my sister Unity and myself when we were children. Hanging on the walls are framed pictures and poems done by Unity when she was quite small—queer, imaginative, interesting work, some on a tiny scale of microscopic detail, some huge and magnificent. The Hons’ Cupboard, where Debo and I spent much of our time, still has the same distinctive, stuffy smell and enchanting promise of complete privacy from the Grown-ups.

But it was in 1963 where Decca cemented her status as a muckraker and polemicist as she turned her poisoned pen to, of all things, the funeral industry. Her research and generous, but nonetheless genuine, anger took the form of the book that launched her in America, called “The American Way of Death”.

In the same interview with Christopher Hitchens, Jessica Mitford explained that her husband Bob Treuhaft, was a… “lawyer in Oakland, where we live California, and he represented a number of unions, and he began to be extremely annoyed along about the middle 1950s to find out that when the breadwinner of the trade union family died, the hard-fought-for death benefit meant to the widow and children would automatically find its way into the pocket of an undertaker. Because whether it be just as it was 1000 1200, or whatever, that would be the amount of funeral. So Bob started to organize the Bay Area funeral society, which was a nonprofit organization devoted to the idea of cheap funerals actually. In other words, they will have a contract with one or more Undertakers to do it so much for a fraction of the cost”. So, it was Jessica’s husband who persuaded her to investigate the lack of scruples and probity of the funeral industry.

Bess Lovejoy of Lapham Quartley wrote that “The book is a narrowly conceived exposé, a screed against expensive funerals and the men who sell them, not an analysis of how or why funerals got that way. It’s interesting to contrast Mitford’s book with the seminal death texts of the past, such as the two in the fifteenth century that were both called The Art of Dying, or the Tibetan and Egyptian books of the dead. Those works helped individuals prepare for death by prescribing a series of attitudes and rituals designed to ensure a good death and a better afterlife. Such rituals helped people grapple with death’s great challenge to the self; they made death mean. By contrast, Mitford’s book is a Consumer Reports of death.”

Could Jessica Mitford Have Killed Hitler?

Of the Mitford legacy and mystique, one event (or rather non-event) that is curiously understudied was the opportunity that Decca had to kill Hitler.

Hitler was a friend to two of Decca’s sisters. In that same interview with Hitchens, Mitford stated that “Unity and Diana, were tremendous friends of Hitler. Diana was married to the head of the British Union of Fascists, Sir Oswald Mosley, and Unity, went to Germany to learn German and to meet Hitler, which she did. And she became part of his inner circle. So she was about 18. I was 16 at the time. So I thought they’re going to be fascist and couldn’t bear the whole idea. But, you know, you can probably imagine what it was like growing up, in the 30s. Where, in other words, there was fascism abroad…” Mitford went on to say that she “… did join the Communist Party. But Unity said, Well, why don’t you come to Germany and I’ll introduce you to the Fuhrer. Well, I thought what I could easily have done is to have a gun. And so, obviously, I mean being Unity’s sister, I wouldn’t have been searched or anything and whip [the gun] out and shoot him dead. But I suppose my own desire to live was too strong as I was quite sure I would be immediately surrounded and then killed myself, that was very cowardly”.

It is important to point out, however, that had this event taken place, it would have been in 1934 when public opinion of Hitler was quite high. It can’t be forgotten that Hitler was named Time Magazine’s Man Of The Year in 1939. Thus, had Decca gone through with it, though she would have indeed saved the world a lot of trouble, she would most likely have been remembered as a terrorist. This is the playful irony often on offer from the annals of History.

In search of her next target, it was in 1970 that Mitford set her sights on the now-notorious Famous Writer’s School. In her own words, Decca commented that “I think I had more pleasure out of that than out of absolutely anything else in life. This wretched school. In those days, throughout the 60s, and until 1970, you couldn’t open a magazine, you couldn’t open a Sunday paper without seeing an enormous advertisement for the famous writer’s school. Which will say something like, “Do you sometimes have a restless urge to write?” And then to find out you have talent, you send in an application for their tests, and you take the test. And if you’re one of the very few lucky people to pass, you’ll then be enrolled in the famous writer’s school, and you can learn to become a famous writer. Well, I’ve seen these advertisements I’ve always been interested in them. 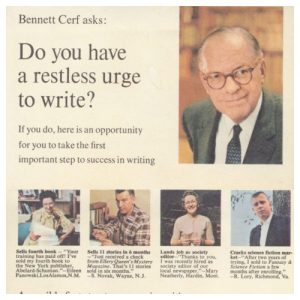 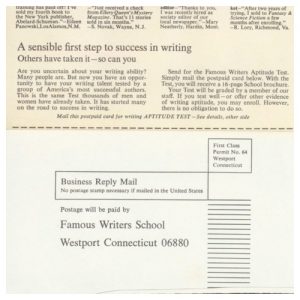 Mitford went on to say that  “… just as in the case of the American way of death, it was my husband, Bob, who got me very interested. A widow aged about 73 foreign-born came to him in some distress because she’d signed up for the famous rival school. She’d sent in the application and she received back the aptitude test. She’d set that back and passed it with flying colors. Of course, it turned out that nobody ever failed it. But anyhow, she passed that and then immediately a salesman came and told her about the glories of the school, and relieved her of $200 against a total amount of 900, which was how much the whole course cost. So immediately, she’d done that she had second thoughts and when the books arrived, and the lessons, she sent them back unopened, asking for money back, saying that she was ill, and she couldn’t take the course, the school wrote back saying that you have to have a written medical excuse if you want to withdraw and refuse to tell a man so she came to see Bob.

Decca then said that Bob “… had her write out in her own handwriting, an account of the salesman’s visit, which she did, and it was totally illiterate. In other words, she was Dutch by birth, and in her account, she had Dutch words sprinkled in and she couldn’t even write an English sentence. So Bob, Xeroxed this thing and sent it to the school demanding refunds for fraudulently stolen $200 and sent carbon copies to Bennet Cerf and to the Consumer Fraud Division of the Attorney Generals on so then the school caved in. That was the thing that got me fascinated, this woman and what happened to her, so I did have a lot of a back and forth with her. I did do an article about it, which eventually appeared in the Atlantic. But of course, during it, I got hold of all the famous writers, a lot of them are names that wouldn’t mean anything today. But Faith Baldwin, who was a sort of pop writer between the wars, and Phyllis McGinley, they’ve now all gone to join the famous faculty in the sky but at the time, they were the faculty. “.

Once again the power of Mitford’s pen was on full display. In the aftermath of a slew of interviews and public appearances, The Atlantic Monthly received letters from around 300 people who had similar experiences with the Famous Writer’s School and officials in Indiana and Washington sent reprints of the article to every high school counselor and principal. A member of Congress entered the entire article in the Congressional Record and convinced the Federal Trade Commission to investigate. The school’s stock steadily declined, and in 1972, the school filed for bankruptcy

In July 1996, Decca Mitford, at the age of 78, died of lung cancer. In her final act of playful defiance, Jessica Mitford had an inexpensive funeral, costing $533.31 – she was cremated without a ceremony, her ashes scattered at sea, the cremation itself costing $475.

Herb Caen, of  the San Francisco Chronicle, wrote that  “In this strangely flat era of ‘diversity,’ [Mitford] was the rarest of birds, an exotic creature who rose each morning to become the sun around whom thousands of lives revolved.”