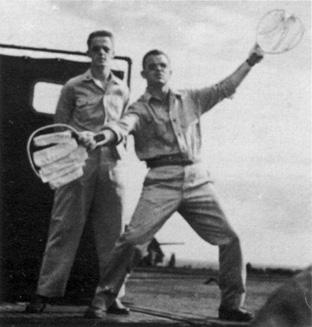 The following article on the history of the landing signal officer is an excerpt from Barrett Tillman’s book On Wave and Wing: The 100 Year Quest to Perfect the Aircraft Carrier. It is available to order now at Amazon and Barnes & Noble.

The origin of the landing signal officer is uncertain. During USS Langley’s pioneering operations in the early 1920s, reputedly one tyro aviator had trouble getting aboard. Allegedly the executive officer, Commander Kenneth Whiting, grabbed two sailors’ white hats and stood aft on the flight deck to motion the junior birdman down.

True or not, the need for specially trained landing signal officers (LSO) was obvious. Experienced pilots were selected for the job, though “experienced” was a relative term. During Langley’s 1925 cruise for Pacific war games, the LSO was Lieutenant D. L. Conley, the only pilot aboard who had made a carrier landing. Another flier, Lieutenant A. W. Gorton, was dragooned into the role and waved his friends in touch-and-go landings until procedures were established. Gorton later confided that the air officer, Commander Charles Mason, watched Lieutenant Del Conley wielding the paddles “until Mason was sure that we knew what the hell we were doing.”

Eventually signals were standardized for basic information: high or low, left or right, fast or slow, hook or wheels not down, and the “cut” signal to chop throttle and land the aircraft.

Through much of World War II, the LSO e was essentially a guild. Likely candidates were selected and mentored by current wavers, learning the business by observation and tutoring. While some junior officers enjoyed the responsibility and prestige, others balked at losing flight time. However, most LSOs were qualified in every type of aircraft aboard their ship, lending variety to the job. Marines also qualified as the LSO, though seldom had reason to perform the role. Meanwhile, in 1941 both Atlantic and Pacific Fleets formed Aircraft Carrier Training Groups that produced some LSOs in the normal course of qualifying pilots. In 1943, a dedicated LSO school was established at Jacksonville, Florida, but it languished postwar. Another school stood up at Pensacola in 1974 moved to Jacksonville, and from there to Norfolk, Virginia, where it remains today.

The Royal Navy mostly did without deck landing control officers (DLCOs), until the verge of World War II. More commonly DLCOs were called “batsmen” for the paddles they wielded. During joint operations with the Americans, as the junior partners the British adopted U.S. LSO signals, which sometimes were opposite of the Royal Navy’s. For instance, when a batsman signaled “high” he meant “climb” while his Yank counterpart meant “too high.”

Whatever the nationality, the LSO earned a reputation as colorful individualists. James Michener’s eccentric character “Beer Barrel” was played to near perfection by Robert Strauss in the movie The Bridges at Toko-Ri, showing him sneaking liquor aboard ship in a golf bag. In real life, during the 1980s the senior waver was Commander John “Bug” Roach, who wore a white turtleneck sweater on USS Ranger’s platform. He added a black bow tie to the ensemble, insisting, “Gentlemen always dress for dinner” while dining on “slider” hamburgers.

This article on the the history of the landing signal officer is an excerpt from Barrett Tillman’s book On Wave and Wing: The 100 Year Quest to Perfect the Aircraft Carrier. It is available to order now at Amazon and Barnes & Noble.