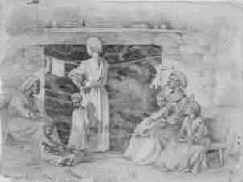 The living conditions of slaves in the antebellum American South were some of the worst for slaves across history. As legal property of their masters they had no rights themselves and fared far worse than Roman slaves or medieval serfs. Perhaps only slaves in sugar cane plantations in the Caribbean fared worse. Africans sold as slaves in the Americas had to rely on their owners providing them with housing or building materials, pots and pans for cooking and eating, food and clothing. Many slaves did the best they could with what they were given. Most did not dare complain for fear of receiving a whipping or worse punishment.

Slaves were allocated an area of the plantation for their living quarters. On some plantations the owners would provide the slaves with housing, on others the slaves had to build their own homes. Slaves that had to build their own houses tended to make them like the houses they had had in Africa and they all had thatched roofs. Living conditions were cramped with sometimes as many as ten people sharing a hut.

They had little in the way of furniture and their beds usually made of straw or old rags.

Slaves who worked in the plantation house generally had slightly better housing nearer to the house and were given better food and clothing than those slaves that worked in the fields. 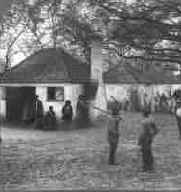 Sometimes they were given pots and pans for cooking, but more often they had to make their own. The long hours they had to work in the fields meant that they had little free time for making things to improve their living conditions. Some slaves used a hollowed out pumpkin shell called a calabash, to cook their food in.?

Most plantation owners did not spend more money on food for their slaves than they had to and so the slaves lived on a diet of fatty meat and cornbread. 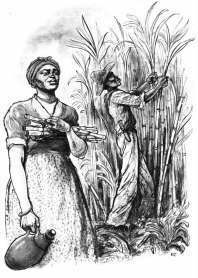 Slaves would be given one pair of shoes and three items of underwear a year. Although these and other clothing would be provided by their owner, they were often ill-fitting and made of coarse material

Most slaves had to work from sunrise to sunset. Some owners made their slaves work every day, others allowed slaves one day a month off and some allowed their slaves to have Sundays as a rest-day.

Slaves would spend their non-forced working time mending their huts, making pots and pans and relaxing. Some plantation owners allowed their slaves a small plot of land to grow things to supplement their diet.

Slaves were not allowed to read or write, but some were allowed to go to church.