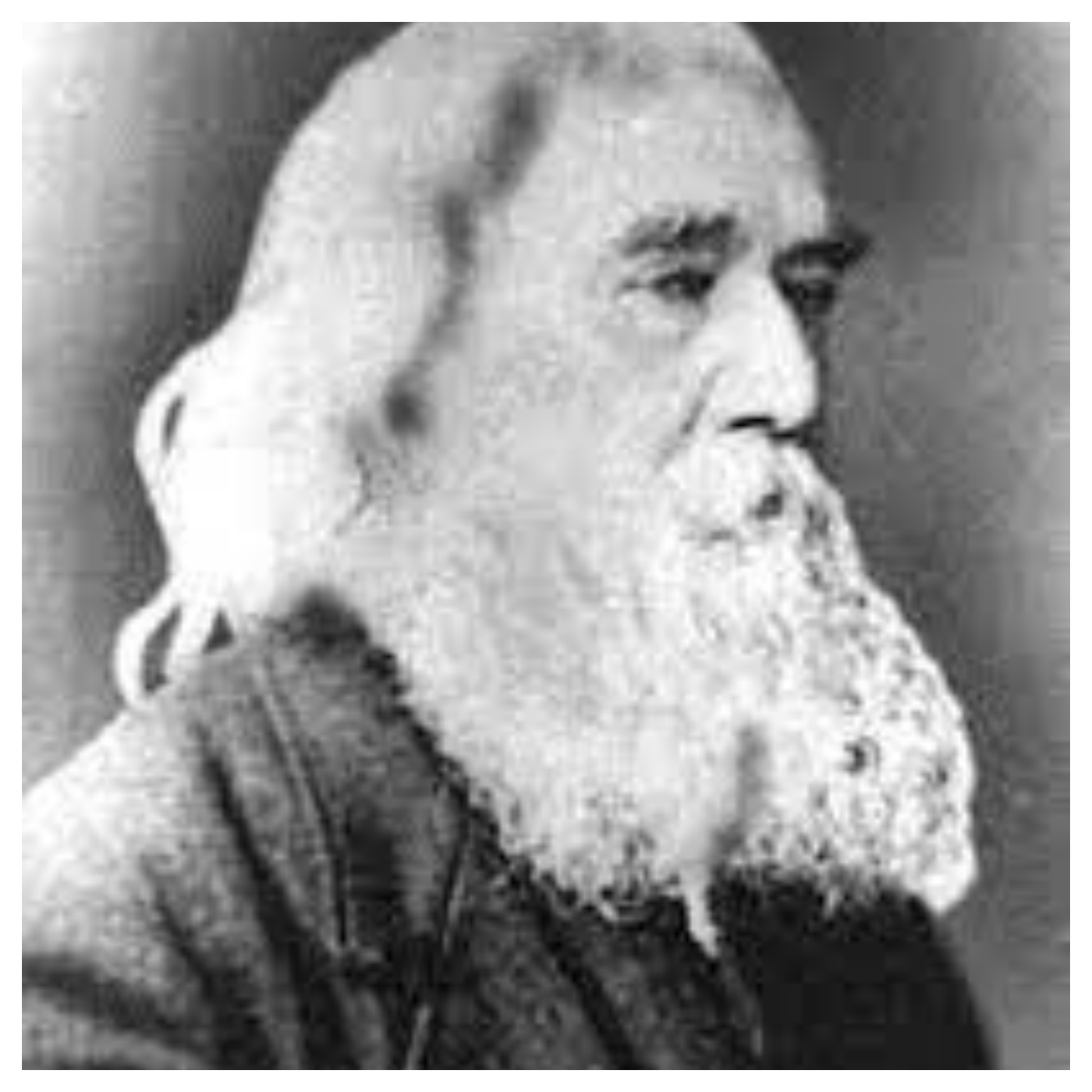 Lysander Spooner was an extremely important, though often-neglected figure of history. An idiosyncratic and dialectic figure whose deistic and anarchic views pervaded all of his work and bucked against his contemporaries.

Spooner was born on January 19th, 1808 to Asa and Dolly Spooner on a farm in Athol, Massachusetts. A descendent of the Mayflower pilgrims, Lysander was named after a spartan admiral who destroyed the Athenian Beet, ending the Peloponnesian War.

As LysanderSpooner.org reports, Both the men and women of the Spooner family agreed on abolition. Lysander recalled at his mother’s death that she and the whole family had been “ardent abolitionists for years.” And after rushing sixty miles from Boston to be at her deathbed, Lysander counted it “no slight consolation” that his mother had seen in print his Unconstitutionality of Slavery (1845). “During those [last] two days, she was too sick to talk much,” Lysander wrote a friend, “but she expressed great pleasure that my book was out and that it was thought likely to do so much good.”

Spooner’s legal career began in 1833, in Massachusetts,  under the direction and tutelage of John Davis and Charles Allen.

Davis would go onto to become the governor of Massachusetts in 1841 and was so highly regarded and renowned for his integrity, he received the Lincolnesque moniker of “Honest John”.

Allen was the grandson of the great Samuel Adams and would go on to become congressman for the ill-fated Free Soil party.

The rule of Massachusetts courts required a student to study in a lawyer’s office before admission to the bar—three years was required of a college graduate; but for a non-graduate, five years were required.  In those days a college education was purely classical; it offered a lawyer no advantage other than ornament and polish. Spooner himself never went to college.

Believing this rule discriminated against the “well-educated poor,” Spooner set out to test the legality of the provision. Although Davis had graduated from Yale, and Allen from Harvard, they encouraged their young protégé to set up his own practice in defiance of the rules. Spooner printed cards which read: “Lysander Spooner, offers to the public his services in the Profession of the Law. Offices in the Central Exchange. Worcester, April 8, 1835.” [5] To justify this action, Spooner published a petition in the Worcester Republican, August 26, 1835, which was sent to each member of the Massachusetts General Court.

He argued that “no one has yet ever dared advocate, in direct terms, so monstrous a principle as that the rich ought to be protected by law from the competition of the poor.” So, it was in 1836 that this law was struck down.

Spooner’s lack of a religious belief would come to be the downfall of his legal practice. Spooner was what is known as a deist, which could briefly be summarized as accepting that a divine presence or prime mover may be inferred from an apparent harmony in the celestial arrangements, but that this same being takes no interest in human affairs and thus would disqualify Spooner as religious, let alone a Christian. It was in 1836 that Spooner would publish what could be described as polemic, “A Deist’s Reply to the Alleged Supernatural Evidences of Christianity“. It was this treatise, as well as previously punished pieces “The Deist’s Immortality” and “An Essay on Man’s Accountability for his Belief” that would serve as nails in the coffin of Spooner’s legal career.

Between 1836 and 1837, Spooner would work as a banking clerk and, after making enough money, would buy 80 acres of land on the Maumee Rapids in Ohio.

Plato wrote that “necessity is the mother of invention”. This could well qualify for Spooner when he saw in New York, both a burgeoning economic and innovative expanse in congress with a woefully stagnating postal service.

Keeping his streak of conscientious rebellion alive, Lysander Spooner wrote a letter to the Postmaster General, informing him that he intends to start his own mail company as an avenue to disperse his own literature. He stated that on January 11, 1844: “I propose soon to establish a letter mail from Boston to Baltimore. I shall myself remain in this city, where I shall be ready at any time to answer any suit.” Spooner included a pamphlet entitled The Unconstitutionality of the Laws in Congress Prohibiting Private Mails. He advertises in all major newspapers and prints his own stamps for the purpose of distributing his pamphlet.

In response to this, the Government (which subsidized the costs of building infrastructure used for mail routes.) arrests those who carry the letters and threatens transportation companies with the loss of government contracts if they carried Spooner’s mail.

According to the Foundation for Economic Education, Spooner argued that although the Constitution granted Congress the power to “establish post offices and post roads,” this only gave Congress the authority to create a postal service, not to prohibit competition. For comparison, the same Constitutional clause gave Congress the power “to borrow money,” yet no one claimed that only Congress could do that. If a postal monopoly was legitimate, the Constitution would have granted a “sole and exclusive” power to create a postal service like the Articles of Confederation had done.

Six days after Spooner’s company began, Congress introduced a resolution to investigate the establishment of private post offices. Meanwhile, Spooner’s company was booming. As the US postal revenue went down, the government threatened those who were caught serving private mail carriers. In his book, Spooner noted that by March 30, he and his agents were arrested while using a railroad in Maryland to transport letters. Spooner, busy with multiple legal challenges, was released on bail by mid-June.

Congress, finally but reluctantly, acknowledged the need to lower postal rates., Congressional officials stressed that “it was not by competition, but by penal enactment, that the private competition was to be put down”. In March 1845, Congress fixed the rate of postage at five cents within a radius of 500 miles. The post office adopted tactics that private carriers used to increase efficiency, such as requiring prepayment via stamps. These changes turned the post office’s budgetary deficit into a surplus within three years.

While these reforms would prove a victory for the public, they spelled the downfall of Spooner’s enterprise. FEE closed by stating that Legal fees, along with the increased usage of the post office, brought about Spooner’s downfall. As Benjamin Tucker, Spooner’s mentee described: “As the carrying of each letter constituted a separate offense, the government was able to shower prosecutions on him and crush him out by loading him with legal expenses.”.

But out of this was born a Lysander Spooner that would soon face his most enduring and noble battle… the war against slavery.

Having moved back to the family farm in Athol, Spooner picked himself right up from the mire and set his sights on the crucial question of slavery.

As Libertarism.org cites, In Radical Abolitionism: Anarchy and the Government of God in Antislavery Thought (1973), one of the best books on abolitionism ever written, Lewis Perry said that Lysander Spooner “was the leading authority for the view that slavery was illegal under the Constitution.” Although “he was greatly respected by other abolitionists,” Spooner “was a maverick abolitionist who belonged to none of the familiar factions in the movement.” For example, he cannot be neatly placed in either the political faction of the abolitionists, as we find in members of the Liberty Party, or in the anti-political Garrisonian faction. Although Spooner provided the political abolitionists with strong support for their position that the Constitution is antislavery, he refused to join any political party or to vote for any candidate. Here he agreed with the Garrisonians on the immorality of political action while rejecting their premises, most notably their view that the Constitution is proslavery and William Lloyd Garrison’s advocacy of pacifism.

However, Garrison and his pacifistic acolytes could not follow Spooner down, let’s say the path of most resistance since their principles did not permit them to endorse violence of any kind, whether offensive or defensive. It is here that Spooner would, to a lesser extent, join the radical political interests of John Brown.

Among his fellow-traveling abolitionists, Spooner was part of a small handful who not only defended slave uprisings in the past but who also recommended slave revolts as a just and viable method of helping to achieve emancipation in the future. We see this especially in Spooner’s 1858 broadside A Plan for the Abolition of Slavery. Here Spooner called for “bystanders” to assist in the emancipation of slaves “by force if need be.” To deny this right would be tantamount to forbidding us “to rescue men from wild beasts, or from burning buildings.”

There seems to be no question that history should have been kinder to Spooner. He was clearly a rebel with a cause. We saw this from his thumbing of the nose to the postal service to his challenge of the current status quo of the legal system. We certainly saw this from his, some might say radical, views on slavery.  His legacy is one that should never be forgotten and his example shone brightly as how to live life as a setter and not a follower.