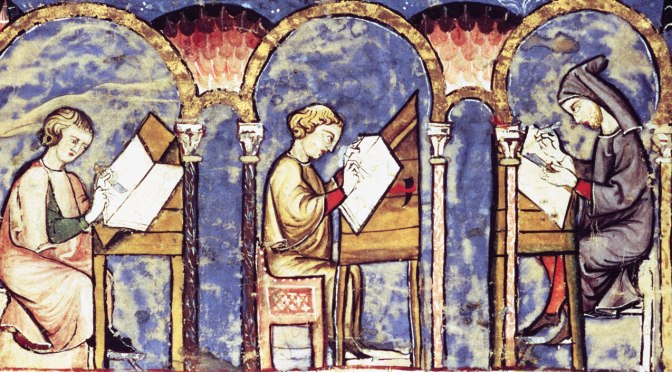 Making a book in the Middle Ages was extremely hard work. It took the skin of several calves to make the vellum (a writing material), an army of monks in a scriptorium, rare ink for the illustrations, and six months’ time. Writing for hours on end was torture (monks called it just that when they wrote in book margins, which read like ransom notes). Yet if not for the work of these monks, every single work from antiquity would have been lost. Almost no writing from ancient Greece or Rome survives in its original form; all of it was copied and preserved in medieval monasteries.

In this episode, we explore the arduous process of making a book. We will specifically look at the Codex Gigas, the largest medieval book in the world (it’s a yard tall, 19 inches across, 9 inches thick, and weighs 165 pounds). It is also known as The Devil’s Bible because according to legend, the author sold his soul to the devil to complete it.

Overall, we have these monks to thank for keeping ancient science and philosophy alive. If not for their punishing efforts to record these ancient documents, they would have been lost forever.