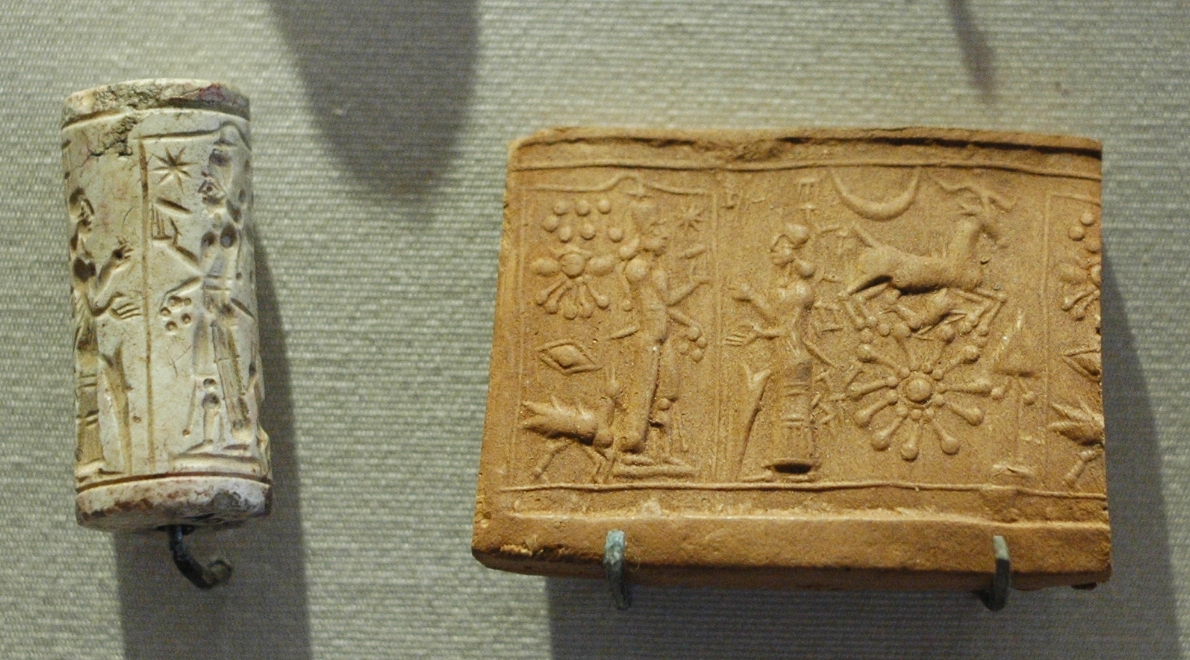 Cylinder seals were a small, carved stone cylinder that was used to make an impression in wet clay. When rolled on the wet clay, the seal left an impression that could prove ownership or identity. These small—about an inch to an inch and a half long—seals are delicate works of art, intricately carved with the tiny figures of gods, beasts and men, usually relating a myth, a banquet or an heroic deed.

For 3,000 years cylinder seals were used all over Mesopotamia and wherever Mesopotamian influence was felt. Most were made of stone, whether limestone or semi-precious stones such as carnelian or lapis lazuli. Some were made of copper, bronze, gold, ivory or bone.

Because cylinder seals were made of a durable material, they have survived the ravages of time. Over 2,000 cylinder seals have been found dating from a single thousand year period. Many more have yet to be found in Iraq, Iran, Syria, Turkey and other lands touched by Mesopotamia through trade or travel. Unlike fragile materials like cloth or wood, these samples of delicate craftsmanship in stone survive to reveal slices of Mesopotamian life. Their impressions on clay pots and tablets tell us of the existence of the seals even if they are never found.

Archeologists and historians value cylinder stones when they are discovered. The carving on the stones reveal a tiny picture of Mesopotamian life and give us an insight into these people of long ago. The pictures illustrate religious beliefs and myths as well as daily life and business deals. From the seals or their impressions we have details of Mesopotamian dress, dining, agricultural activities, dance, music and traveling. Themes on the seals include heroic actions, mythic endeavors, the gods, deeds of kings and daily activities.

Besides the seals’ impressions, they can be dated as there were trends of styles and types of stone favored at one time over another. Thus, when a cylinder seal is found, its shape, size, material and decorative style gives archeologists an idea of its time period.

Many people used cylinder seals: merchants, soldiers, scribes, priests, craftsmen, cooks, servants, kings and even slaves who did business for their owners. They were used to sign business deals, to show ownership of goods, to sign treaties, letters and marriage contracts. Cylinder seals also had a magical use—a man used his seal as a talisman or amulet for protection. Often the seals made of semi-precious stones or gemstones conveyed this magical protective use.

Mesopotamians wore their cylinder seals as jewelry. When finishing the seal, the seal cutter drilled a hole through the stone so it could be wore as a pendant or pin. Cylinder seals were often topped with a gold cap and sealed onto the stone with bitumen. Cylinder seals functioned in a variety of ways—it represented its owner, signed important documents, was used as a protective amulet and was worn as a beautiful piece of jewelry.