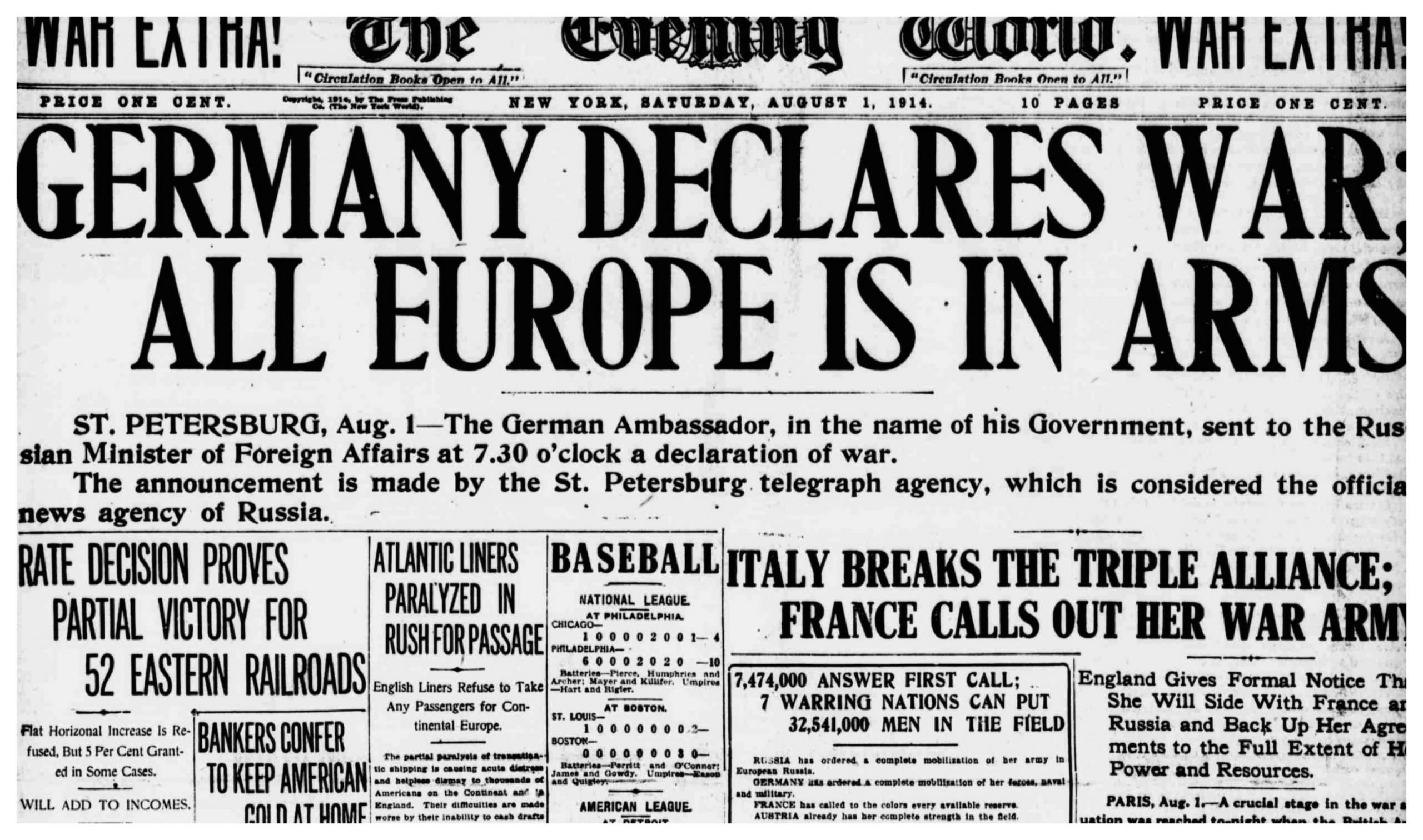 Military planning disasters had a home when 1914 began, and planners in continental Europe’s four major powers had detailed plans to fight the coming war. By year’s end, none of those plans had worked. Why?

The evolution of warfare from tribal spats to global conflicts gave rise to a belief in planning as fundamental to battlefield success. “Failing to plan is planning to fail” is a Staff College aphorism. And therein lies the rub because there’s another military maxim that gives planners nightmares: “No plan survives first contact with the enemy.” World War One offers a salient example of this.

By 1914, France, Austro-Hungary, Russia, and Germany all had formal war plans in place, ready to go on a moment’s notice. While these plans were specific to their respective nation’s strategic goals and capabilities, all were rooted in the bedrock belief that victory came only through offense! Defensive wars were unwinnable and therefore not reflective of the aggressive ‘national character’ a country needed to survive on the anarchic world stage. Carl von Clausewitz, the poster boy of military theorists championed the “war of annihilation” as a 19th-century version of shock and awe: a quick encirclement, use of overwhelming force at key points delivered by highly mobile, massed artillery and fast-moving troops moving in concert to destroy an enemy army in a first-round knockout punch. It was a siren’s song so seductive military brain trusts across Europe rushed to join the ‘cult of the offensive”.

1] France: PLAN XVII  –  Although Napoleon Bonaparte’s string of victories taught the French military the benefits of offensive warfare, the thinking behind Plan XVII was more deeply rooted in the defeat of his nephew, Napoleon 3rd  in the Franco-Prussian war [1870-71].

“The French drew the conclusion that they’d lost because they’d fought a defensive war, and that in future they should plan for an attacking war,” explains British soldier/historian Gordon Corrigan.

After nearly 40 years of continuous evolution, Plan XVII, such as it was, was finally issued to field commanders just six months before WW1 broke out. Said to be little more than a plan for troop movements, it proved an unmitigated disaster. According to the plan, the first attack was to be against Alsace Lorraine, the 5,000 square miles of territory ceded to Germany at gunpoint to end the Franco-Prussian war. The loss still stuck in the craw of the French military and so, with the ink was still drying on their Declaration of War, French forces launched their assault on August 6th and succeeded in pushing the Germans back into the craggy peaks of the Vosage mountains. But no further. Over the next four years, this ‘Little Verdun’ would claim 30,000 casualties and still be in German hands at the war’s end.

In the north, another French army was badly mauled trying to stop the 600,00 Germans charging towards Paris through Belgium. In a series of bloody firefights known as The Battle of the Frontiers, 329,000 French soldiers were made casualties before the Germans were halted by the “Miracle On The Marne”. Both sides then dug in, literally, and the Western Front was soon reduced to what historian Douglas Porch described as; “a narrow band of congealed horror.” It would take three years and nearly a million more French casualties to persuade commanders to abandon their cherished notions about the offense being the best defense.

2] Austro-Hungary: Italy (Case I), Russia (Case R), Serbia (Case B) or Russia and Serbia (Case R+B)  –  A Hungarian poet called the multi-ethnic monarchy of Austro-Hungary  “The Joyful Apocalypse” to describe the improbable coalition of new states cobbled together out of the ruins of Holy Roman Empire. Each was a seething cauldron of ethnic rivalries and/or nationalist sentiments held together by the personal will of genial emperor Franz Joseph. Under the direction of the saber-rattling Defense Minister Conrad von Hotzendorf,  the General Staff maintained plans for fighting not a one or even two-front war but three wars against neighboring Italy, Serbia, and Russia. Observed author/historian Norman Stone; “In Vienna, there was always a large gap between ideals and reality.”

Indeed, the Austro-Hungarians spent the least on defense of all the major powers. Not having fought a major war in 30 years left its forces under-equipped, under-trained and poorly-led. “The First World War was a conflict for which Austro-Hungary and its army were woefully unprepared,” explains John. Schindler at the US Naval War College. “The cost of waging total war on three major fronts and several smaller ones proved ruinous for the army.”

And so, some 400,000 hapless soldiers were killed, wounded or captured in their first battle.  A year later another 173,000 would be lost fighting the Italians. The underlying weaknesses of Austria’s military and the government’s inability to cope with these problems destroyed the fragile federation and its centuries-old monarchy, prompting an embittered Viennese psychiatrist named Sigmund Freud to observe dourly; “The Hapsburgs have left behind nothing but a pile of filth.”

3] Russia: Plan 19  –  Despite its poor showing in the Crimean and Russo-Japanese wars,  Russia, with its vast empire, monolithic army, and imperialist ambitions was the Bogeyman of European politics, especially to the Germans. They needn’t have worried. Planners at the Imperial War College were hamstrung in their attempts to formulate a cohesive military strategy by their own internal divisions and prejudices, their ranks riven by implacable disputes between the infantry, cavalry, and artillery over their respective roles.

For its part, the elite horsed cavalry which served as the eyes and ears of the army insisted its needs take priority. “The continuing belief in cavalry’s efficacy meant that railways that might have sent infantrymen speedily to the front were loaded instead, with horses and fodder..” reveals Norman Stone.

As for the million-man infantry that had Germany quaking in its boots, it was comprised entirely of peasants who could neither read nor tell time. This precluded any kind of battle plan other than simply moving men straight forward or backward. Accomplishing either was still difficult because of a chronic shortage of educated, trained, junior officers, a talent-gap created by the snobbery of senior officers. Thus attacks were merely huge mobs of loosely supervised men charging enemy positions – with the predictable result that over two million of them would be killed, in the end, for nothing.

Most shameful, deep personal enmities between Russia’s field commanders would allow their armies to be divided and conquered by the Germans at Tannenburg in the war’s opening round. That defeat can be traced to the failure of Plan 19 which typified Russia’s leadership malaise.

In 1910, General Yuri Danilov developed what became known as Plan 19. In it, Danilov rightly predicted that if war broke out in Europe, the German army would likely attack France first, giving Russia the chance for a quick snatch-and-grab victory. But…rival factions argued that Austro-Hungary represented the greater threat. In 1912, Danilov’s plan was substantially revised to concentrate on defending Russia from Conrad von Hotzendorf’s divisions. The debate caused a fatal rift in the Russian army that made any cooperative effort between northern and southern operations impossible. So, although Russian troops soundly thrashed the Austro-Hungarians, their victory would be overshadowed by their comrades’ defeat at Tannenburg, culminating in The Great Retreat of 1915, still considered one of the greatest disasters in military history. Norman Stone lays the blame entirely at the feet of the army’s inept/corrupt/lazy/quarrelsome generals. “Faulty planning had much more to do with the initial Russian disasters than a material weakness. The Czarist army was crippled by its inability to use its superiority.”

4] Germany: The Schlieffen Plan – “The Schlieffen Plan was the most ambitious offensive plan ever devised,” contends Spencer Jones, author of Courage Without Glory. The brainchild of Alfred von Schlieffen, Chief of the General Staff of the German army from 1891 to 1905, the plan recognized Russia as the greater enemy and so the idea was to quickly knock France out of the war in order to turn the full force of German military might on Russia.

The Great Memorandum of 1906 which became the document we now call the Schlieffen Plan, envisioned a Napoleonic-style maneuver of large masses of men into the flank of the enemy to maximize the Prussian advantage in military discipline while avoiding a long slugging match. However, to achieve this short war of annihilation, Von Schlieffen had to circumvent the line of fortresses that the French had built since 1871 and this could only be done by invading Belgium, a clear violation of international law.

The valiant Belgian army delayed the German advance for three days before becoming roadkill but the “Rape of Belgium” pushed Britain into the war. Stiff resistance by troops of the British Expeditionary Force “threw a bag of sugar into the engine of the German war machine” according to Spencer Jones and the advance ran out of steam. “The friction of war slows the German invasion, erodes its fighting power, and exhausts its troops. Ultimately, the Plan asks more of its soldiers than flesh and blood can deliver.”

Gordon Corrigan concurs. “Magnificent war machine that it was, I do not think the German soldier could have marched fast enough nor could the logistic tail have kept up.”

“The single decisive battle…that the German General Staff had envisioned before 1914 was no longer possible,” observes German military historian Peter Lieb. “Clausewitz’s concept of a strategic annihilation battle faded when it met the reality of an industrialized war.”

Post-war thumb-sucking over the plan’s failure prompted a number of German generals to claim in their memoirs that it would have worked if only: insert excuse here. “Of course they’d say that,” scoffs independent historian Ross Beadle, who’s made something of a career studying The Schlieffen Plan. “They had to explain to the German people how 44 years of war planning had gone belly up! The plan may have looked good in war games but they thought they were Masters of the Universe and overrated their ability enormously.”

So to what are we to attribute these four failures? Incompetence, to be sure. Vanity and rigidity played a role as well. But they were also blown apart by the winds of change.

“Put bluntly, strategists had planned for one set of crises, but got another,” says US War College instructor Michael Neiberg. “Their world had changed far too quickly for their plans or their intellectual preconceptions to adjust.”

The Origins of The Schlieffen Plan, Ross Beadle, [online lecture and commentary]