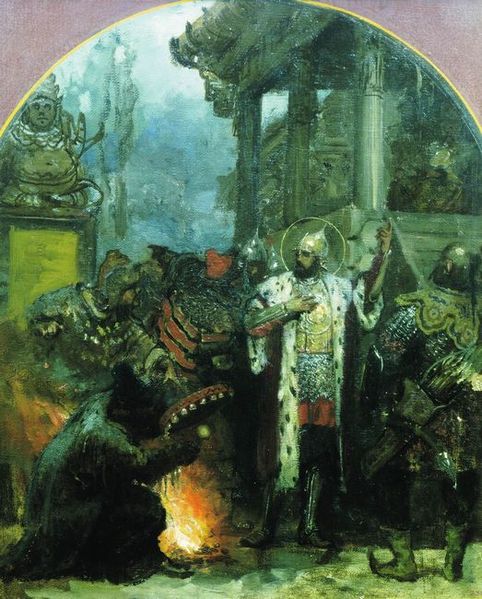 The Mongol people were Tengerians, which is a shamanist belief system. Tengerism means to honor the spirits. Shamanism is a form of animism, which holds that everything has a spiritual essence, including rocks, water and plants—everything. Humans are living spiritual creatures in a world of other spirits/forces/gods, with the Greatest Spirits being Koke Mongke Tengri, the Eternal Blue Heaven, and Mother Earth. These spirits of the sky, land, water, plants, rocks, ancestors and animals are honored. Tengerism has three main tenets: to take care of and honor the spirits, to have personal responsibility and to keep harmony among all elements of the environment, the community, and oneself. When trouble or illness came, it meant things were out of balance and a holy man or woman, a shaman, was called to rectify the situation.

Genghis, the man, was interested in all religions. In fact, many Mongols were shamanists at the same time they practiced other religions. Genghis’ sons married Nestorian Christian women, for example, although they also held shamanist beliefs. As the Mongols swiftly began conquering the lands around them, Genghis and his advisors decided on religious tolerance as a policy. Rather than antagonize conquered peoples by suppressing their religion, the Mongols exempted religious leaders from taxation and allowed free practice of religion whether it be Buddhism, Nestorian Christianity, Manichaeism, Daoism or Islam. This policy ensured an easier governance of conquered territories.

Genghis Khan and his descendants employed Buddhists and Muslims in their administration of the empire. Genghis even had close advisors who held to other religions. To the Mongols, then, religious tolerance wasn’t only an imperial policy, it was the way they lived. Mongol leaders occasionally invited religious leaders to come and debate each other as a way of exploring and learning about the various religions under their rule. When Ogedai built the Mongol’s capital city Karakorum, he allowed religious leaders to build mosques, churches, lamaseries and temples for their worshippers.

At its height, the Mongol Empire stretched from the Pacific Ocean to the Mediterranean Sea and incorporated many nations and religions. The governance of this huge area would not have been possible without the Mongols’ policy of religious tolerance. The Great Khans and minor khans all kept this policy, even if they themselves converted to one religion or another. Gazan, khan of the Ilkhanate division in Iran, for example, converted to Islam in 1295. Kublai Khan practiced Buddhism, but allowed all peoples he ruled to practice their own religion. Religious tolerance is one of the positive legacies of the Mongol Empire, which was rare then as it is today.