The following is a guest post from Ryan Brown. You can find out more about him here.

Morse code is one of the most significant technologies to come out of the 1800s and played an irreplaceable and foundational role in the evolution of modern-day technology such as the cellphone, the internet, and the face-palm emoji.

But what role did this revolutionary technology play in the rise of aviation, and in what ways is it still used today?

The Rise and Fall of Morse Code in Aviation

In the early days of aviation, communication with ground-based operations was achieved through visual signals such as colored paddles, flags, and light, similar to ATC light signals used today.

However, with the birth of military and commercial aviation and the congested skies that followed, a new means of aerial communication was required that could expand beyond line-of-sight.

Aircraft began carrying radio operators whose sole purpose was to communicate with ground-based operations using Morse code. Code was communicated using plungers that would complete an electric circuit when pushed down to send either a dot or a dash.

Aircraft were also equipped with trailing antennas that operators could extend during flight and retract before landing.

However, as the world of Aviation continued to grow, the limitations of using Morse code became more apparent and dangerous.

Morse code’s greatest limiting factors were its speed and accuracy. While proficient operators could transmit faster than most teenagers can type a text, it still needs to be double-encoded from thought to English and English to Morse code. This drawback places a significant bottleneck on the code’s effectiveness in communication.

However, in 1912 the British Army began to integrate wireless telegraphy with their aircraft. Several years later, in 1915, the first voiced communication from the ground-to-air was made:

“If you can hear me now, it will be the first time speech has ever been communicated to an airplane in flight.”

Do You Need to Know Morse Code to Fly?

So what role does the code play today, and do pilots need to learn it to fly?

Because of the advancements made in telecommunications, pilots do not need to learn Morse code or memorize any of the code’s alphabet. Pilots today communicate with ground-based operations and other pilots using voice communication via radios.

While the code is no longer used for communication, it is still widely used for passive identification of radio navigational aids such as VORs and NDBs.

When listening to the station, the pilot simply needs to cross-reference the sound of the Morse code identifier with the written form on their charts or flight notes.

The VOR (Very-High-Frequency Omni-Directional Range) is one of the most common aviation radio navigation systems used today.

Pilots can use VORs to navigate to and away from a station and can even use several stations at once to triangulate their position.

A continuous Morse code signal is transmitted from these navigation stations that a pilot can use to verify that they are accepting the correct navigation aid and that the navigation aid is still in service. 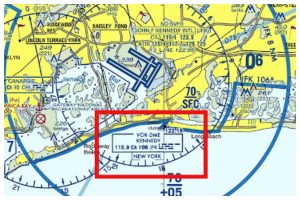 The red box shows how it provides both the frequency of the station and the airport identifier in Morse code.

The VOR station continuously broadcasts the three-letter airport identifier “.— ..-. -.-” and advises the pilot that they are indeed tuned in to the correct station, and they can proceed to use that station for navigation.

Sadly, this awesome technology is slowly becoming obsolete with the widespread adoption of GSP navigation and lateral guidance systems.

Another radio navigation system that utilizes Morse code is the NDB (Non-directional beacon).

Just like the VOR, you can verify that you are tuned into the right station’s frequency by listening to its code’s callsign. However, unlike the VOR, non-directional beacons can be identified with one, two, or three letters and have a much longer range at lower altitudes.

Check out the example below of an NDB station near JFK airport. Note that just like the VOR, the chart provides the station’s frequency as well as its callsign in Morse code. 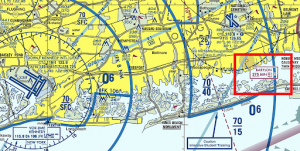 If a pilot tunes into the frequency, they should hear the corresponding code identifier “-… -… -.” or BBN.

The advancements in aviation and the benefits they brought to humanity owe a great deal to the history and development Morse code.