Between 1933 and 1945 the Nazis opened around 20,000 concentration camps in Germany and Nazi-occupied countries to deal with the numbers of people arrested as enemies of the state. The camps were run by the SS and inmates faced harsh, insanitary conditions, poor diet, forced hard labour and ad hoc punishments.

The first camp was opened at Dachau on 22nd March 1933. It was built to detain 5000 political opponents of the Nazi Party, mainly Communists.

All concentration camp inmates had to wear a coloured badge to show the nature of their ‘crime’. 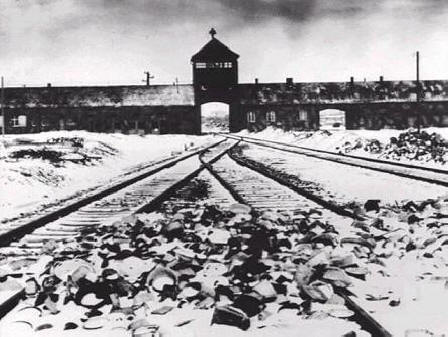 Chelmno began operating as a killing centre in December 1941. Victims were put into sealed container trucks which had been specially configured to allow carbon monoxide gas from the exhaust to be pumped inside. The bodies were buried in mass graves. It is estimated that at least 150,000 Jews and gypsies died at this camp.

Belzec opened in March 1942. Victims were brought to the camp by trains, unloaded and taken to gas chambers disguised as showers. Carbon monoxide was them pumped into the chamber. The bodies were buried in mass graves. Around 500,000 Jews perished in this camp together with an unknown number of Poles and gypsies.

Sobibor opened in May 1942. It was constructed and operated in the same manner as Belzec. In the spring of 1943 around 300 prisoners managed to escape. In November 1943 all remaining prisoners in the camp were shot. In total around 167,000 Jews were killed in this camp.

Treblinka II was built next to the Treblinka I concentration camp and opened in July 1942. It was constructed and operated in the same manner as Belzec and Sobibor. The bodies were initially buried in mass graves but later were burned in huge ovens. Around 925,000 Jews were killed in this camp.

Auschwitz-Birkenau (pictured above) was the largest killing centre and was designed to be used as a mass extermination camp for Jews as part of Hitler’s Final Solution. The first gas chamber was operational by March 1942 and by mid 1943 there were a total of four gas chambers. Trains arrived on a daily basis bringing Jews from all German-occupied countries and victims were taken straight to gas chambers disguised as showers. Zyklon B pellets were dropped into the chambers and the bodies were burned in crematoria. It is estimated that between 1 and 2 million Jews were killed in this camp