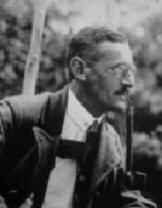 On 5th January 1919, Anton Drexler together with Gottfried Feder and Dietrich Eckart founded the Deutsche Arbeiterpartei DAP (German Workers’ Party). Drexler wanted to form a party that supported the German workforce. From its earliest beginnings the party tended towards right wing politics. It was Nationalist, racist, anti-Semetic, anti-capitalist, anti-communist and determined to see a return to pre-war Germany.

Although the group only had around 40 members in 1919, the authorities were concerned that it may be a Communist group and so sent an army intelligence agent, Adolf Hitler, to investigate.

On September 12th 1919, Adolf Hitler attended a meeting of the German Workers’ Party. During the meeting a point was raised with which Hitler disagreed and made a passionate speech against. Anton Drexler was impressed with Hitler’s ability to speak well and invited him to join the party. After some persuasion Hitler agreed. He was the fifty-fifth person to join the group. (Later he changed his membership card to show that he was the 7th person).

On 24th February 1920 the name of the group was changed to Deutsche Nationalsozialistische Arbeiterpartei NSDP National Socialist German Workers’ Party, known as the Nazi Party. As part of its re-launch the party published its 25 point programme:

1. We demand the unification of all Germans in the Greater Germany on the basis of the right of self-determination of peoples.

2. We demand equality of rights for the German people in respect to the other nations; abrogation of the peace treaties of Versailles and St. Germain.

3. We demand land and territory (colonies) for the sustenance of our people, and colonization for our surplus population.

5. Whoever has no citizenship is to be able to live in Germany only as a guest, and must be under the authority of legislation for foreigners.

6. The right to determine matters concerning administration and law belongs only to the citizen. Therefore we demand that every public office, of any sort whatsoever, whether in the Reich, the county or municipality, be filled only by citizens. We combat the corrupting parliamentary economy, office-holding only according to party inclinations without consideration of character or abilities.

7. We demand that the state be charged first with providing the opportunity for a livelihood and way of life for the citizens. If it is impossible to sustain the total population of the State, then the members of foreign nations (non-citizens) are to be expelled from the Reich.

8. Any further immigration of non-citizens is to be prevented. We demand that all non-Germans, who have immigrated to Germany since the 2 August 1914, be forced immediately to leave the Reich.

9. All citizens must have equal rights and obligations.

10. The first obligation of every citizen must be to work both spiritually and physically. The activity of individuals is not to counteract the interests of the universality, but must have its result within the framework of the whole for the benefit of all Consequently we demand:

11. Abolition of unearned (work and labour) incomes. Breaking of rent-slavery.

12. In consideration of the monstrous sacrifice in property and blood that each war demands of the people personal enrichment through a war must be designated as a crime against the people. Therefore we demand the total confiscation of all war profits.

13. We demand the nationalization of all (previous) associated industries (trusts).

14. We demand a division of profits of all heavy industries.

15. We demand an expansion on a large scale of old age welfare.

16. We demand the creation of a healthy middle class and its conservation, immediate communalization of the great warehouses and their being leased at low cost to small firms, the utmost consideration of all small firms in contracts with the State, county or municipality.

17. We demand a land reform suitable to our needs, provision of a law for the free expropriation of land for the purposes of public utility, abolition of taxes on land and prevention of all speculation in land.

19. We demand substitution of a German common law in place of the Roman Law serving a materialistic world-order.

20. The state is to be responsible for a fundamental reconstruction of our whole national education program, to enable every capable and industrious German to obtain higher education and subsequently introduction into leading positions. The plans of instruction of all educational institutions are to conform with the experiences of practical life. The comprehension of the concept of the State must be striven for by the school [Staatsbuergerkunde] as early as the beginning of understanding. We demand the education at the expense of the State of outstanding intellectually gifted children of poor parents without consideration of position or profession.

21. The State is to care for the elevating national health by protecting the mother and child, by outlawing child-labor, by the encouragement of physical fitness, by means of the legal establishment of a gymnastic and sport obligation, by the utmost support of all organizations concerned with the physical instruction of the young.

22. We demand abolition of the mercenary troops and formation of a national army.

23. We demand legal opposition to known lies and their promulgation through the press. In order to enable the provision of a German press, we demand, that:

a. All writers and employees of the newspapers appearing in the German language be members of the race:

b. Non-German newspapers be required to have the express permission of the State to be published. They may not be printed in the German language:

c. Non-Germans are forbidden by law any financial interest in German publications, or any influence on them, and as punishment for violations the closing of such a publication as well as the immediate expulsion from the Reich of the non-German concerned. Publications which are counter to the general good are to be forbidden. We demand legal prosecution of artistic and literary forms which exert a destructive influence on our national life, and the closure of organizations opposing the above made demands.

24. We demand freedom of religion for all religious denominations within the state so long as they do not endanger its existence or oppose the moral senses of the Germanic race. The Party as such advocates the standpoint of a positive Christianity without binding itself confessionally to any one denomination. It combats the Jewish-materialistic spirit within and around us, and is convinced that a lasting recovery of our nation can only succeed from within on the framework: common utility precedes individual utility.

25. For the execution of all of this we demand the formation of a strong central power in the Reich. Unlimited authority of the central parliament over the whole Reich and its organizations in general. The forming of state and profession chambers for the execution of the laws made by the Reich within the various states of the confederation. The leaders of the Party promise, if necessary by sacrificing their own lives, to support by the execution of the points set forth above without consideration.

On 28th July 1921 Adolf Hitler became leader of the party. By the end of 1921 the party was fairly well established with a membership of 3000 people. The party had adopted the swastika as its symbol, the Hitler Youth had been formed for the children of party members and the SA, stormtroopers had been created as the party militia group.

Following the failed Munich Putsch – attempt to overthrow the Bavarian government, in November 1923, Hitler was imprisoned. On his release in December 1925 he resolved to win power by non-violent, legitimate means. The SA were separated from the main party and took on the role of a support group. The SS, Hitler’s personal bodyguard, took on a similar role.

The Nazi party stood for election but initially only gained a small number of seats in the Reichstag (German Parliament). They gained much more support when Germany suffered a financial crisis due to the Great Depression and after Hitler had been appointed Chancellor of Germany in January 1933.

The banning of the Communist party following the Reichstag fire on 27th February gave the Nazis a clear majority in parliament. The Enabling Act passed in March 1933 gave Hitler the power to make laws without consulting parliament.

During 1933 all political parties other than the Nazi party were banned, membership of the Hitler Youth was made compulsory for all teenagers, local government was taken over by the Nazis and trade unions were banned. The secret police, The Gestapo were also formed. One year later the Night of the Long Knives saw the murder of all SA leaders who disagreed with Hitler’s policies.

Following the death of President Hindenburg in August 1934, Hitler combined the post of Chancellor and President to become Fuhrer of Germany. From this point until the Nazi downfall in 1945 it was Hitler as Dictator rather than the Nazi party that held true power. Members of the Nazi Party retained their positions so long as they remained in the favour of Hitler.

Leading Members of the Nazi Party