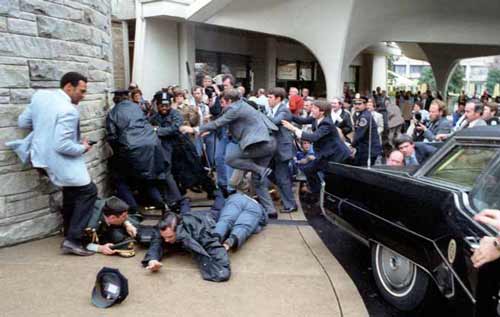 The following article on attempts at the Nixon assassination is an excerpt from Mel Ayton’s Hunting the President: Threats, Plots, and Assassination Attempts—From FDR to Obama. It is available for order now from Amazon and Barnes & Noble.

More than a hundred people each year were detained by agents and uniformed officers at the White House during the Nixon years for Nixon assassination attempts.

Most were released without charge. But many were sent to St. Elizabeth’s Hospital.

The Secret Service ruled that the detainees had to be “mentally ill and dangerous—to others or to themselves” to be sent to St. Elizabeth’s for Nixon assassination attempts. But staff there did not always agree with the Secret Service’s decisions. One detainee, for example, believed one of Nixon’s daughters loved him and went to the White House with flowers in hand. He was sent to St. Elizabeth’s, but the director of central admissions said he was not “dangerous” and therefore should not have been detained. The hospital’s director of central admissions, who challenged the Secret Service’s decisions, was supported by the hospital’s psychiatrists, who agreed that many alleged “threateners” should not have been arrested.

But the Secret Service cited numerous individuals who needed to be hospitalized because they had repeatedly returned to the White House after a warning of talk of a Nixon assassination, sometimes reacting violently when confronted by agents or members of the uniformed branch. “We feel there are just some people you can’t turn back on to the street,” one Secret Service official said in 1971. “We don’t feel they mean to kill the president but they just shouldn’t be wandering around the streets.”

The Secret Service was sometimes accused of “over-reacting” when investigating threats. But ascertaining the level of seriousness of cases involving idle threats was difficult, because agents always needed to consider the rights of citizens who, in a moment of crude humor or innocent rhetoric, uttered words that comprised the vocabulary of a threat but did not intend to carry it out.

In 1969, the Supreme Court ruled that proof of a “true” threat to the president was required to sustain a conviction and that statements made in jest or as “political hyperbole” or “idle talk” were permissive free speech. Soon after the ruling, the U.S. Court of Appeals reversed the conviction of forty-nine-year-old Eugene F. Alexander, an alcoholic who telephoned the White House one evening from a phone booth in downtown Washington. He spoke to Secret Service agents in an hour-long conversation and uttered numerous threats to the president involving the use of “artillery.” At the agents’ request, he provided his name, address, and telephone number. He was arrested while still talking on the phone and convicted a few months later.

Like presidents before him, Nixon was targeted by threateners who were either “repeat offenders,” like twenty-year-old Harry Thomas Smith from Raleigh, North Carolina, or “mentally-ill threateners,” like Eugene M. Hart of Denver, Colorado. Smith had been sentenced to two years in prison in 1967 for threatening President Johnson. He was subsequently released, and in 1971 he was sentenced to four years in prison for making similar threats against President Nixon. He was also convicted of threatening a federal judge. In 1981, the incorrigible Smith returned to his old ways and was arrested for threatening President Reagan. Nixon assassination threats and attempts never abated. In 1969, former mental patient Carlos Valle was found guilty of making telephone calls threatening to kill President Nixon. In 1968, the week after the assassination of Senator Robert F. Kennedy, he had stalked New York mayor John Lindsay. When Lindsay appeared on the steps of city hall for an outdoor ceremony, a police officer noticed Valle had a knife protruding from his belt. The officer pulled the knife out and arrested Valle. Valle was sent to a mental institution, and no charges were made against him. Nine months later he called the local offices of the FBI and Secret Service and threatened to kill Nixon.

On March 24, 1970, a man with a mental illness telephoned the FBI office in Denver, Colorado, and gave his name as “Charles Hart.” He reported that “his brother,” Eugene Hart, was en route to Washington, D.C., to kill President Nixon. The caller also phoned Paul Rundle, Secret Service special agent in charge of the Denver office.

The Secret Service investigated numerous alleged “assassination plots” by left-wing groups during the Nixon years, nearly all of which came to naught. As David Greenburg acknowledged, “The prevalent fear of assassination confounded clear-eyed distinctions between genuine and rhetorical threats. Radicals exploited the uncertainty to nettle authorities while authorities used it to harass radicals.”

The Secret Service also feared that plots were being hatched by black radical groups, including alleged plots by Black Panthers and the allegations that a disgraced former New Orleans police officer, Edwin Gaudet, had threatened to kill Nixon on his August 1973 visit to the city, which led to a nationwide manhunt.

The Secret Service used the “threatening the president” statute frequently, especially against Black Panthers who uttered threats to kill American judges and political leaders on numerous occasions. J. Edgar Hoover characterized the organization as “the greatest threat to the internal security of the United States.”

One alleged plot the Secret Service took very seriously came only six months after a Palestinian Arab, Sirhan Sirhan, assassinated presidential candidate Robert Kennedy. Kennedy’s assassination caused law enforcement officers and Secret Service agents to fear that other Arab fanatics were planning to assassinate American leaders. In December 1968, when Nixon was president-elect, New York police received a tip-off of a plot to kill him. However, following a trial in which prosecutors used information provided by an unreliable informant, three Yemeni Arabs were found not guilty.

In 1969, the Secret Service discovered an alleged plot by Cuban terrorists to blow up Nixon’s Key Biscayne, Florida, home. A Cuban agent, Lazaro Eddy Espinosa Bonet, who was acting undercover as a Cuban diplomat, tried to recruit a Cuban-American servant inside the Nixon compound in Key Biscayne to draw up blueprints of the security arrangements. The agent threatened to harm the servant’s family, who lived in Cuba, if he did not comply. The servant was told he would be provided with microtransmitters, which he should plant throughout the Nixon home. The transmitters would be monitored by Cuban agents in Miami or aboard fishing boats offshore. Allegedly, the blueprints were to be used to plan an attack on the compound by Cuban commandos. The attack group was to first blow up the communications complex inside the compound then strike the Nixon home. The plot was ultimately foiled when the servant told Secret Service agents about Bonet.

The U.S. State Department was convinced that the plot was serious, and they expelled the Cuban diplomat.

This article on attempts at the Nixon assassination is from Mel Ayton’s Hunting the President: Threats, Plots, and Assassination Attempts—From FDR to Obama.. Please use this data for any reference citations. To order this book, please visit its online sales page at Amazon or Barnes & Noble.