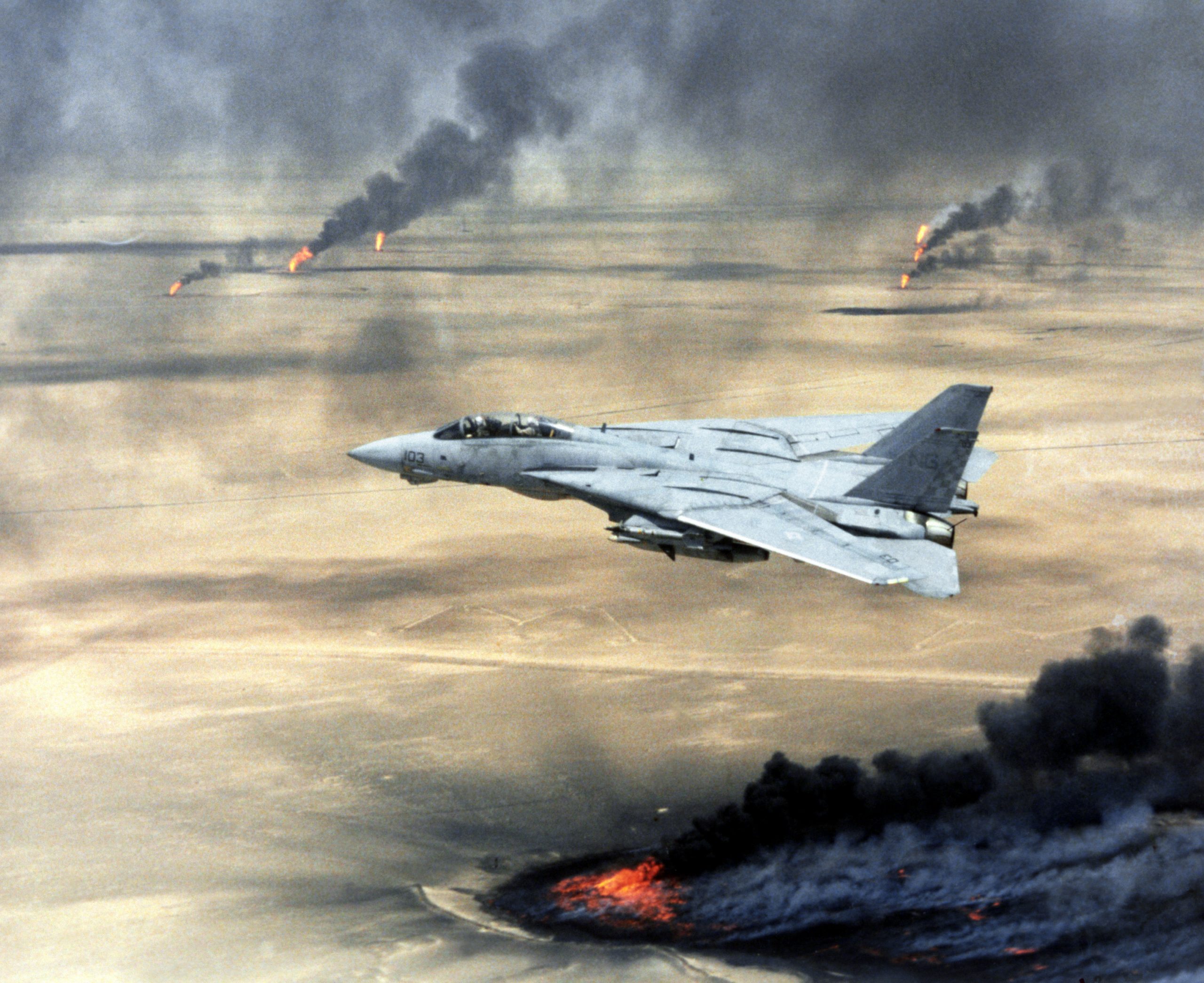 The following article on Operation Desert Storm is an excerpt from Barrett Tillman’s book On Wave and Wing: The 100 Year Quest to Perfect the Aircraft Carrier. It is available to order now at Amazon and Barnes & Noble.

On August 2, 1990, Saddam Hussein’s Iraqi regime invaded Kuwait, seeking to secure a greater share of Mideast petroleum. Aside from blatant aggression, the West could not tolerate a despot’s hand on more of the world’s oil taps. A U.S.-led coalition began Operation Desert Shield, building up forces in the region prior to forcibly ejecting Iraq from Kuwait. A Navy operations officer later quipped, “Saddam won the toss—and elected to receive.”

First on the scene was Independence, arriving in the Gulf of Oman on August 5. Carriers became critically important, with Coalition airpower crowding ashore until there was little remaining ramp space in the Arabian Peninsula. News crews, needing footage of current air operations, cycled through “Indy” for several days, prompting Air Force partisans to describe CNN as “Carrier News Network.”

The naval aviation planning cell took an unusual approach. “We looked at D.C. and asked ourselves what targets should we hit to shut down this place?” Turning that equation inside out, strike planners established targeting priorities for Baghdad. Command and control centers, government offices, bridges, and power plants all made the list.

Before the air war lifted off, the Navy had positioned America, John F. Kennedy, and Saratoga in the Red Sea. Midway and Ranger steamed in the Persian Gulf. The latter were joined by Theodore Roosevelt (CVN-71) in late January. In all, the carriers deployed thirty-four attack or fighter squadrons plus electronic warfare, early warning, and antisubmarine/tanker units. Before returning home, Eisenhower (CVN-69) steamed the Red Sea, prepared to defend against an Iraqi offensive into Saudi Arabia.

One of the aviators flying that night was Commander Mark Fitzgerald, skipper of the VA-46 “Clansmen” aboard John F. Kennedy. Though the tartan-painted squadron had been transitioning to FA-18 Hornets, Fitzgerald took his command to war in its familiar A-7 Corsair IIs with sister squadron VA-72 on merely four days’ notice.

And the defenses were up: threat warning lights strobed in American cockpits, indicating Iraqi MiGs airborne and SAMs active as the Corsairs pushed through weather toward the target.

About 70 miles from Baghdad the weather broke and the sight was impressive. There was literally a dome of lead over the city with missiles popping out the top. Decoys, bombs and Tomahawks had brought every SAM system on line. Each HARM aircraft fired two missiles from predetermined launch positions, and the third missile was fired at targets of opportunity against any emitting sites that were left.

I fired my first HARM. We were all warned, don’t look as the missile plume is blinding. Of course, I looked and had stars twinkling in my eyes. Next missile, I didn’t look until it had climbed to its perch at 80,000 feet. The flight was increasingly exciting. The prebriefed shots could be fired outside missile range, but targets of opportunity were much closer.

My scope had a symbol I had not seen before—a blinking “six.” Fascinated, I studied it a bit too long only to look up to see an SA-6 missile pitching over and heading my direction. I quickly shot my HARM and hit my chaff switch. But the chaff was gone, emptied during a MiG encounter. I executed a very hard break turn to escape. A satisfying explosion of my HARM and a disappearing SAM warning indicated that the missile had done its job.

Meanwhile, air combat was brief for the tailhookers. On the first night, an Iraqi MiG-25 shot down a Saratoga Hornet, apparently due to confusion over the Foxbat’s identity. The next day the pilot, Lieutenant Commander Scott Speicher, was written off by the U.S. Defense Department, though his death was not confirmed until 2009.

Later that day, two of Speicher’s squadron mates quickly engaged MiGs during an airfield attack, shot down both “bandits,” and continued to hit the target.

Carrier air wings deployed with laser guided bombs (LGBs) and the new Standoff Land Attack Missile (SLAM), which had not completed operational testing. But Intruders and Hornets employed SLAM against precision targets, continuing the trend begun over Vietnam a quarter century before.

After Iraq was ejected from Kuwait, aircrews sometimes contended with reduced visibility from the smoke from hundreds of burning oil wells—the residual of Saddam’s vindictiveness. Some of his retreating troops set fire to Kuwaiti wells in a calculated policy of spite. But in the desert, under clear skies, the Iraqi army had nowhere to hide and was battered relentlessly.

The Navy had not performed sustained strike operations in almost twenty years, but procedures and logistics were up to the task. In both the Persian Gulf and the Red Sea, carriers received additional aviation fuel every three days via underway replenishment. Carriers in the Gulf maintained the same rate for ordnance while Red Sea air wings needed more “bombs and bullets” as often as every one or two days, being closer to their operating areas. Even during heavy operations, no individual ship used more than 5 percent of its ordnance capacity per day, leaving ample reserves.

When a cease-fire of Operation Desert Storm took effect on February 28, the Gulf-based ships had accounted for about two-thirds of the eighteen thousand carrier sorties because the Red Sea station lay four hundred to six hundred nautical miles from its targets. But carrier aviation’s overall contribution was substantial, running some 420 sorties per day.

The G. H. W. Bush administration, eager to disengage, allowed the Middle East’s most accomplished dagger man to remain in power. Some junior officers recognized the folly: during the Tailhook symposium that summer, a Tomcat RIO said, “We’ll have to go back and do it again in ten years.”

He was only two years off.

This article on Operation Desert Storm is an excerpt from Barrett Tillman’s book On Wave and Wing: The 100 Year Quest to Perfect the Aircraft Carrier. It is available to order now at Amazon and Barnes & Noble.