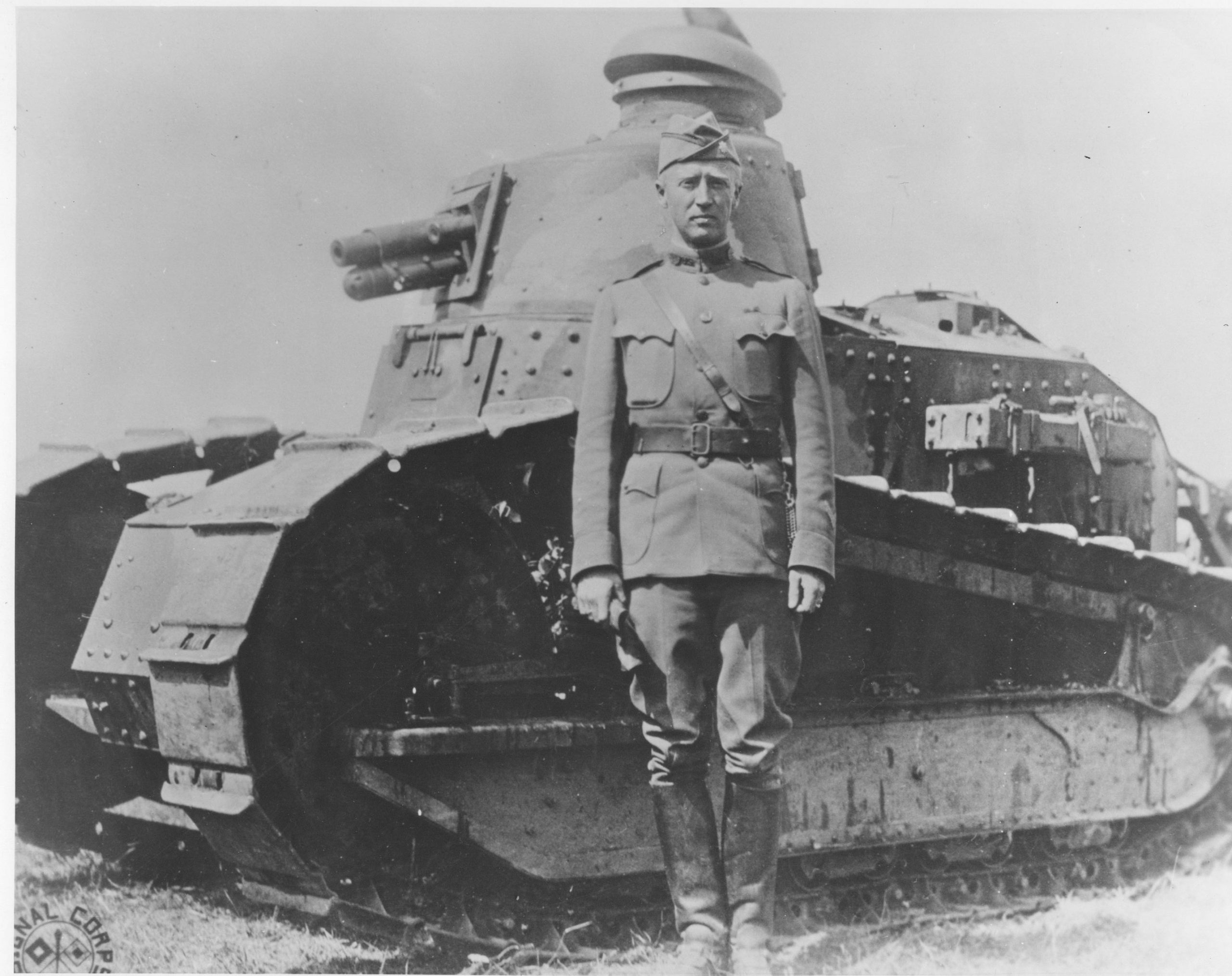 Patton arrived in Europe in 1917 as a captain. He took an interest in tanks and studied this emerging form of mobile weaponry with intensity. At the end of 1917 he was assigned to establish the American Expeditionary Force Light Tank School.

In August 1918, he was placed in charge of the U.S. 1st Provisional Tank Brigade. Patton personally oversaw the logistics of the tanks in their first combat use by American forces. He valued these machines, ordering that no U.S. be surrendered. He led the tanks from the front during the march to the Battle of Saint-Miheil, and walked in front of the into the German-held village of Essey in order to inspire his men. He personally led a troop of tanks into Germany lines near the town of Cheppy. On September 26, at 10 o’clock, Patton and his men had advanced to a crossroads  on the southern edge of Cheppy. A few minutes later, when the fog  began to lift, Patton discovered that he had advanced beyond his own  tanks, many of which were now entangled in a trench barrier over a  hundred yards to his rear. As the protective shield of fog lifted, Patton  and his troops were subjected to withering fire from all directions. The defending Germans had pre-positioned at least twenty-five machine gun nests to protect the town.

As fresh gunfire erupted, all the soldiers but Patton leapt back into the security of the trench. The men implored Patton to escape from the Germans’ fire, but he refused to budge. “To hell with them—they can’t hit me!” Several soldiers were struck down, but Patton refused to take cover. When at last the men got five tanks across the breach, Patton exhorted them to advance again, yelling and cursing and waving his walking stick. About a hundred and fifty doughboys followed him, but when they arrived at the crest of the hill, the onslaught of gunfire forced them all to the ground, hugging it for protection.

Suddenly desperation and fear stripped away Patton’s veneer of bravado, and he began to shake with terror. He wanted to run. He lifted his face up from the dirt, gazed out over the German lines, and then lifted his eyes up to the clouds and saw faces. He blinked, then squinted his eyes, but the faces remained. They were faces of his ancestors. There was General Hugh Mercer, mortally wounded at the battle of Princeton in the Revolutionary War. There was his grandfather Colonel George Patton, killed at Winchester in the Civil War; and Colonel Waller Tazewell Patton, who died from wounds received at Gettysburg. There were other faces and different uniforms, dimmer in the distance, but with the same family resemblance. All the faces looked at Patton impersonally, as if waiting for him to join them.

Patton seemed to understand instinctively that the faces were beckoning him to his destiny. He immediately became calm, shaking off his tremors of fear. “It is time for another Patton to die,” he said aloud. He stood up, grabbed his walking stick, and turned to the soldiers behind him. “Who is with me?” he yelled. Patton headed back out into the enemy fire, certain of meeting death. Of the hundred and fifty soldiers, only six followed him, one of whom was his orderly, Private Joseph Angelo. Soon only two men were standing—Patton and Angelo. The others lay dead or wounded. As he charged forward, Patton eerily saw himself as a small, detached figure on the battlefield, watched all the time from a cloud by his Confederate kinsmen and his Virginia grandfather.

As he came closer to the German lines, Patton was hit. He staggered forward a few steps before collapsing. An enemy machine gun bullet had torn through his body, entering his groin and exiting his buttocks, ripping open a wound the size of a teacup. Between the bursts of machine gun fire Patton could hear the excited conversations of German soldiers who had just taken up a position in a trench a mere forty yards away. It was useless to try to move from the relative safety of the small hollow blown in the earth.

Lying in a bomb crater, surrounded by the horrors of war, Patton was overwhelmed by a deep feeling of warmth and peace, comfort and love. He realized how profoundly death was related to life, how  unimportant the change from life to death really was, how everlasting the soul. He felt that love was all around him, like a subdued light. He had now achieved his destiny, joining the legions of ancestors before him. Blood. He had not failed them; he had shown his courage and faced his fears. Guts. He was dying; but he had no fear of death.

Angelo leaped to Patton’s side to see what was wrong. He dragged his commander to a shallow crater and bandaged his wound, which was bleeding profusely, while the Germans kept firing at their position. Angelo knew that Patton had been gravely wounded and needed medical attention. But the two men were caught in enemy crossfire, and rescuing Patton seemed impossible.

He had now achieved his destiny, Patton thought, joining the warrior kinsmen who had gone before. He had not failed them. He had shown his courage and faced his fears. He was dying, but he had no fear of death. He was comforted by his unshakeable faith, a faith he had held since childhood and that he had carefully nurtured every day since.

As he lay bleeding in a bomb crater, Patton ordered Angelo to return to the tanks and point out the location of the machine gun nests. After two hours, Patton’s tankers and the 138th Regiment of the Thirty-fifth Division subdued the Germans and seized the village of Cheppy. Patton was carried off to an ambulance. Before heading to the field hospital, he insisted that the ambulance driver take him to the headquarters of the Thirty-fifth Division, where he began to dictate a report on the situation at the battle front. In his weakened state, however, the effort proved too strenuous, and Patton lapsed into unconsciousness. Unable to offer further protest, he was taken to an evacuation hospital behind the lines.