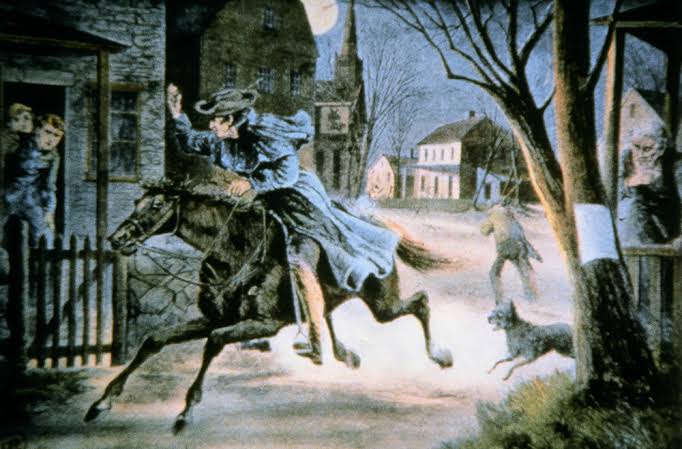 This myth falls under the historical embellishment category. If you attended school in the United States after the early nineteenth century and if you are reading this, I am certain you did—then you probably heard the story of the midnight ride of Paul Revere, about how he single-handedly alerted the Minutemen of Lexington and Concord that “The British are coming!” and helped spark the Revolution. This makes for a good story (or poem), but like Washington chopping down the cherry tree, it is almost entirely false.

The fabrication of the Revere story can be traced to 1860. On the eve of the American Civil War, New England poet Henry Wadsworth Longfellow penned a poem entitled “Paul Revere’s Ride.” His purpose was to stir patriotic sentiment in New England by reminding his countrymen of their past. The last stanza of the poem was a direct call for action against the South. “A voice in the darkness, a knock at the door, / And a word that shall echo for evermore! / For, borne on the night-wind of the Past, /Through all our history, to the last, / In the hour of darkness and peril and need, / The people will waken and listen to hear / The hurrying hoof-beats of that steed, / And the midnight message of Paul Revere.” The Union was in peril, and Paul Revere became the symbolic figure of action, the “night-wind of the Past.”

Thus, a politically aimed work of fiction became the accepted story for the events of 18–19 April 1775. But what really happened? On the night of 18 April, British troops, “regulars,” were ordered to arrest John Han-cock and Samuel Adams in Lexington, Massachusetts, and then to seize arms and provisions at the Concord arsenal. After he discovered the plot, Revere and another rider, William Dawes, took opposite routes to Lexington to warn Hancock and Adams. (The idea was that if one were captured, the other would arrive safely with the warning.) Along the way, Revere and Dawes tried to warn people that the “regulars are coming out.” Other riders joined them, spreading the message, and by the early hours of 19 April, probably forty men rode through the countryside warning their neighbors of the impending invasion.

Revere arrived in Lexington first and met with Hancock and Adams. Dawes arrived thirty minutes later. Joined by Samuel Prescott, they rode on to warn the people of Concord of the impending attack. But before they reached the town, British sentries stopped them at a roadblock. Revere was arrested, but Dawes and Prescott escaped.

Dawes, however, fell off his horse and was injured, leaving Prescott to alert the Minute-men of Concord on his own. Meanwhile, a group of Patriots freed Revere from the three British guards who were escorting him to Lexington. Revere, reunited with Prescott, managed to help Hancock and his family escape Lexington before the British arrived.

Revere’s actions were heroic, but Longfellow took a little poetic license with the facts.