The Crow’s nest was used by the ship’s lookouts. It was from here, at 11.40 pm on April 15 1912, that lookouts Frederick Fleet and Reginald Lee first spotted the iceberg that caused the Titanic to sink.

The Titanic’s officer quarters were located just below the boat deck so that they could quickly reach the bridge in case of emergency. Captain Smith retired to the officers’ quarters about an hour before the ship hit the iceberg. 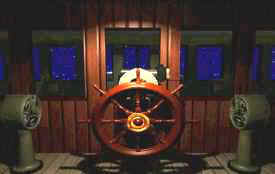 The Bridge was the place where the ship was operated from. There was always a senior officer on the bridge and it was first officer Murdock who ordered the Titanic ‘hard a starboard’ when the iceberg was spotted.

The two first class staircases were very grand indeed. Over the top of both were glass domes which allowed sunlight to pass through. 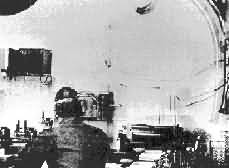 The two wireless operators, Harold Bride and John Philips were employed to send telegrams on behalf of the passengers. They also received and sent messages to other ships. It was here that the messages warning of icebergs were received on the afternoon of 14th April 1912 and the SOS messages were sent when it was realised that the Titanic would sink.

The Titanic’s gymnasium had all the latest exercise equipment – a bicycle, rowing machine and electric horse. Separate sessions were available for men, women and children. 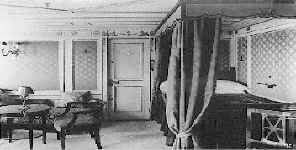 The first class staterooms were luxuriously furnished with curtained beds and tables and chairs. The most expensive even had their own private balcony.

The Titanic’s a la carte restaurant served the finest food. Passengers could reserve tables and book areas for private parties.

The First Class smoking room was open for most of the day. Passengers could purchase the most luxurious cigarettes and tobacco here.

This cafe was designed to look like a Paris street cafe and the waiters were French. 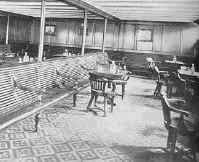 This was one of the leisure rooms provided for the use of third class passengers. 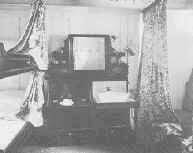 Second class staterooms were occupied by up to four people. By the standards of the day they were luxurious with mahogany furniture and linoleum floors.

In order to ensure that food served at tables was as fresh as possible, the Titanic was fitted with a refrigerated storage area. There were different areas for meat, cheese, flowers and wines and champagne.

Food for both first and second class passengers was prepared in the same galley. There was a large ice-cream maker as well as refrigerated rooms for storing meat and perishable goods.

The First Class Dining room was beautifully decorated with a huge glass dome roof and could seat over 500 people.

This was where the third class passengers took their meals. It was said to be like second class dining rooms on other ships.

The Titanic had 24 boilers each containing 6 furnaces and 5 boilers containing 3 furnaces. Coal was burned in the boilers to power the ship and the steam and smoke was released through the four funnels.

Bruce Ismay, of the White Star Line, hoped that the Titanic would make the fastest ever crossing from Southampton to New York.

First class passengers met in the first class reception room. They would often enjoy a cocktail together before going into dinner. 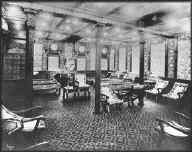 The Titanic’s turkish baths was one of the most luxurious to be found in Europe.

The Titanic’s four electric lifts were one of the new features that made the Titanic special. Designed for use by first and second class passengers only, they each had their own lift attendant. None of the four lift attendants survived.

The Titanic was on of the first ships to have a swimming pool on board. It was filled with sea water which was heated by the boilers. There were separate times for men and women.

As part of it’s recreational facilities for passengers, the Titanic had a full-size squash court.

Because the squash court was located just below the bridge but above the watertight compartments, it was used by the ship’s officers to monitor the rise of the water.

The Titanic had a fully equipped post office staffed by five mail clerks. Over three thousand mail bags were lost when the ship sank and over 7 million items of mail never reached their destination.

Passengers’ cargo was loaded into the cargo room by crane. Among the items lost when the Titanic sank were:

The Titanic had a fully equipped post office staffed by five mail clerks. Over three thousand mail bags were lost when the ship sank and over 7 million items of mail never reached their destination. 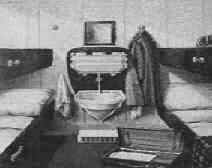 Third Class berths on the Titanic were used by up to eight people. As you can see in the picture above, they slept in bunks and used a communal sink.

The Titanic had a crew of some 890 men and women of whom only 212 were saved. The crew’s quarters were located at the rear of the ship on decks D, E and F.

This was a lifting device to enable large objects to be lifted onto ships. In the film Titanic, a cargo crane is seen lifting crates and a car onto the ship.