Radical Republicans in the Reconstruction Era 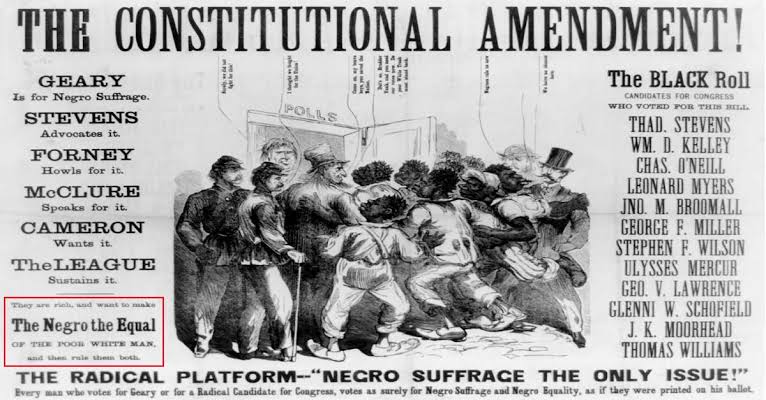 Hiram Revels of Mississippi was elected Senator and six other African Americans were elected as Congressmen from other southern states during the Radical Republicans Reconstruction era.

These policies were not severe enough for the Radical Republicans, a faction of the Republican Party that favored a stricter Reconstruction policy. They insisted on a dramatic expansion of the power of the federal government over the states as well as guarantees of black suffrage. The Radicals did consider the Southern states out of the Union. Massachusetts senator Charles Sumner spoke of the former Confederate states as having “committed suicide.” Congressman Thaddeus Stevens of Pennsylvania went further, describing the seceded states as “conquered provinces.” Such a mentality would go a long way in justifying the Radicals’ disregard of the rule of law in their treatment of these states.

President Johnson’s Reconstruction plan had been proceeding well by the time Congress convened in late 1865. But Congress refused to seat the representatives from the Southern states even though they had organized governments according to the terms of Lincoln’s or Johnson’s plan. Although Congress had the right to judge the qualifications of its members, this was a sweeping rejection of an entire class of representatives rather than the case-by-case evaluation assumed by the Constitution. When Tennessee’s Horace Maynard, who had never been anything but scrupulously loyal to the Union, was not seated, it was clear that no Southern representative would be.

What Northerns And Southerns Thought of the Civil War

What did ordinary soldiers of the North and South have to say about why they took up arms against their neighbors? Acclaimed Civil War historian James McPherson, in his 1997 book For Cause and Comrades: Why Men Fought in the Civil War, consulted a sizable quantity of primary sources, including soldiers’ diaries and their letters to loved ones, to try to determine how the ordinary soldier on each side thought of the war.

In two-thirds of his sources—the same proportion among Northern and Southern fighting men—soldiers said it was due to patriotism. Northern soldiers, by and large, said they were fighting to preserve what their ancestors had bequeathed to them: the Union. Southern soldiers also referred to their ancestors, but they typically argued that the real legacy of the Founding Fathers was not so much the Union as the principle of self-government. Very often we see Southern soldiers comparing the South’s struggle against the U.S. government to the colonies’ struggle against Britain. Both, in their view, were wars of secession fought in order to preserve self-government.