The Radical Republicans of Reconstruction 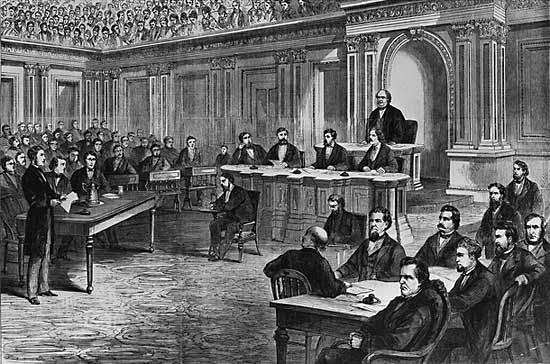 The Radical Republicans sought the complete overhaul of the Southern economy after the conclusion of the American Civil War instead of a more gradualist approach. They also sought the rapid, full integration of Black Americans into public life. Hiram Revels of Mississippi was elected Senator and six other African Americans were elected as Congressmen from other southern states during the Radical Republicans Reconstruction era.

Some readers may wonder if the American people supported all of this radicalism. They had, after all, handed the Radicals a substantial off-year victory in 1866. Howard Beale, in his 400-page study of that election, wrote that such a conclusion would not be justified. There were, as Beale explains, many issues at stake in the 1866 election.

For Northerners, the key issues were economic. Having benefited from high tariffs, many Northerners were not eager to readmit to Congress Southern representatives who would favor lower tariffs. Ex-New York governor Horatio Seymour declared, “This question of tariffs and taxation, and not the negro question, keeps our country divided….. The men of New York were called upon to keep out the Southern members, because if they were admitted they would vote to uphold [i.e., hold up or obstruct] our commercial greatness.”

Likewise, the Radicals had spread the idea that if Johnson’s lenient Reconstruction plan were allowed to stand, disloyal Southern congressmen would vote to repudiate the federal debt—leaving U.S. bondholders with only worthless paper—and may even vote to honor the Confederate debt. That there was not the slightest prospect that such a thing would happen did nothing to prevent Radicals from using it to scare voters. Beale concludes from his study of the 1866 campaign “that the Radicals forced their program upon the South by an evasion of issues and the clever use of propaganda in an election where a majority of the voters would have supported Johnson’s policy had they been given a chance to express their preference on an issue squarely faced.”

In short, Radical Republicans Reconstruction was very far from the cartoonish battle of good, noble Northerners against wicked, unrepentant Southerners that historians of the past several decades have suggested. It was neither as straightforward nor as morally unambiguous as such a simplistic view suggests. The troops were withdrawn from all the Southern states by 1877, and to that extent Reconstruction came to an end. But its legacy of federal supremacy over the states would live on, and come to dramatic fruition in the twentieth century.