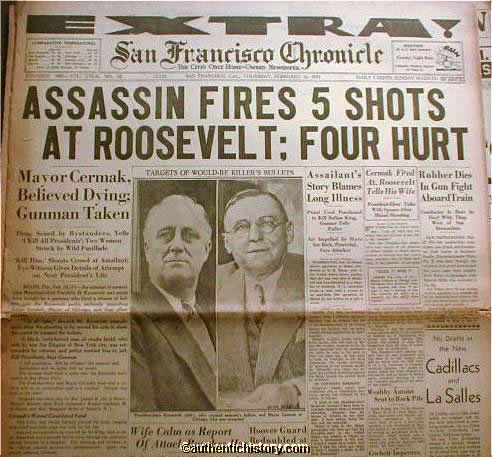 The following article on Roosevelt assassination attempts is an excerpt from Mel Ayton’s Hunting the President: Threats, Plots, and Assassination Attempts—From FDR to Obama. It is available for order now from Amazon and Barnes & Noble.

Many fringe groups made the president a hate figure, including the fascist Khaki Shirts of America, the fascist Silver Shirts, the Ku Klux Klan, and a Ku Klux Klan splinter group, the Black Legion, which was centered in Ohio and Michigan. So did a group of financiers and industrialists, who in 1934 allegedly plotted a coup d’état to prevent FDR from establishing what they feared would be a socialist state.

Though the media regarded it as a tall tale, retired Marine Corps major general Smedley Butler testified before a congressional committee that the conspirators had wanted Butler to deliver an ultimatum to FDR to create a new cabinet officer, a “Secretary of General Affairs,” who would run things while the president recuperated from feigned ill health. If Roosevelt refused, the conspirators had promised General Butler an army of five hundred thousand war veterans who would help drive Roosevelt from office. The so-called “Wall Street Putsch” was mocked by major newspapers. The New York Times said the alleged plot was a “gigantic hoax” and a “bald and unconvincing narrative.”

While it is true that the congressional committee’s investigation led to no prosecutions, Butler’s testimony was later corroborated by Veterans of Foreign Wars commander James E. Van Zandt and by testimony in the congressional hearings, which were made public in 1967. Although most historians have dismissed the alleged plot as no more than wild talk, investigative journalist Sally Denton, in her book The Plots against the President, provides compelling evidence that the plotters were quite serious. Denton claims historians have unjustly understated the serious nature of the plans to overthrow the Roosevelt administration.

Roosevelt Assassination Attempts in the Late 30s and 40s

In 1938, four years after the alleged plot to topple Roosevelt, a speaker at a Chicago meeting of the Silver Shirt Legion of America was quoted as saying America would have a dictator in less than a year, and “if no one else will volunteer to kill him [FDR], I will do it myself.” The Secret Service investigated, but no arrests were made for lack of substantial evidence.

According to Cornelius Vanderbilt Jr., great-great-grandson of the wealthy, famous industrialist commodore Cornelius Vanderbilt, there was a second plot among rich industrialists to depose Roosevelt—after his unprecedented third-term election in 1940. Vanderbilt wrote, “I use the word ‘conspiracy.’ I really am talking of a plot—serious, long-discussed plan to—shall I say—capture the president.” Vanderbilt said the plan was to “impose a firm restraint for the good of the country; to hold this dictator, this madman . . . while some persons set up emergency controls and saved America.” Vanderbilt informed federal agencies of the plot, and they in turn let him warn “those involved in the cabal.” Accordingly, the plot never took off. Vanderbilt said FDR knew about the conspiracy. The story was reported in 1959. The then-head of the Secret Service, U. E. Baughman, said he had never heard of the alleged conspiracy, and FDR’s Secret Service chief Frank J. Wilson also denied any recollection of it.

In late 1941, there was more talk of plots against the president when the FBI reported that Ethel Brigham, an America First committee member, said that if Roosevelt took the country to war a group called the One Gun Club would rise up and revolt. The information was pure rumor, but this did not stop the FBI from “loose surveillance” on the Brigham family. FBI agents reported that Mrs. Brigham attended a New York play where she was observed to make anti-Roosevelt remarks. Nothing more came of it.

This article on Roosevelt assassination attempts is from Mel Ayton’s Hunting the President: Threats, Plots, and Assassination Attempts—From FDR to Obama.. Please use this data for any reference citations. To order this book, please visit its online sales page at Amazon or Barnes & Noble.