The Royal Touch: When British and French Kings Were Thought to Have Healing Powers

History » Podcast Episodes » The Royal Touch: When British and French Kings Were Thought to Have Healing Powers 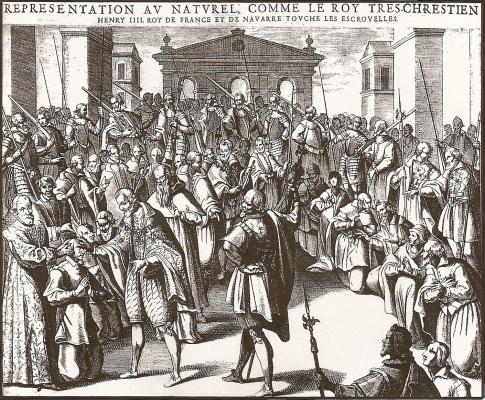 “The Hands of the King are the Hands of a Healer” — this phrase appears in the Lord of the Rings, referring to how Aragorn was identified as the king of Gondor by his healing powers. Tolkien likely based this ability on an actual ceremony in England and France where thousands would gather to be touched by the king and be healed of their illnesses.

From the eleventh to nineteenth centuries, it was believed that a monarch could heal scrofula – called “The King’s Evil” – by laying hands on the infected area. The belief of the Royal Touch began in the Middle Ages but survived, and even thrived, well into the Protestant Reformation, when other types of sacramental ceremonies were erased. It was enormously popular with the public. Charles II touch nearly 92,000 during his reign – over 4,500 a year. So many wanted the royal touch that officials demanded the afflicted produce a certificate to prove they had not already received it and were coming back for seconds.

The ritual persisted through very different eras and religious periods because kings and queens all used it to claim that God supported their reign.

"The Royal Touch: When British and French Kings Were Thought to Have Healing Powers" History on the Net
© 2000-2020, Salem Media.
September 22, 2020 <https://www.historyonthenet.com/royal-touch-british-french-kings-thought-healing-powers>
More Citation Information.
Loading...